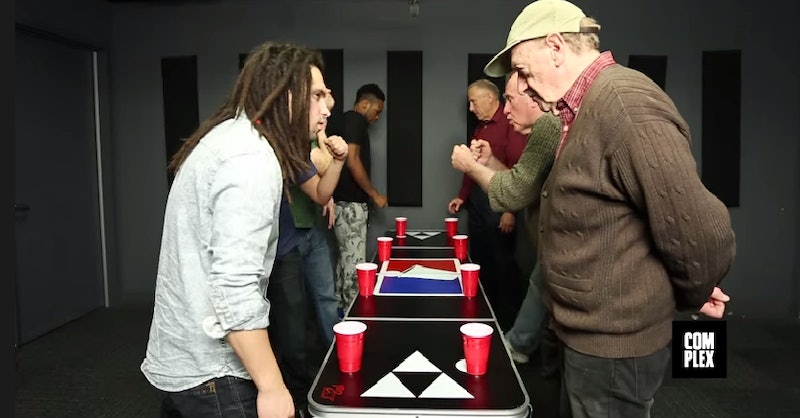 If there's anything more satisfying than watching college bros get straight-up crushed in drinking games, it's watching college bros get straight-up crushed in drinking games by old people. Because the world is a wonderful place, this happened in front of cameras and ended up online, as a video entitled "Drinking Games: Seniors Vs. Seniors." I have only one question. Why didn't someone think of this sooner??The video, produced by the geniuses at Complex , is divided into three alcohol-fueled tests of endurance: beer pong, flip cup, and anchorman. If you've ever seen a movie with Zac Efron in it or set foot on a college campus at all ever, you're probably familiar with beer pong and flip cup. Anchorman is a little less popular (translation: I'd never heard of it before so I'm assuming nobody else has either), but it's pretty simple: team members have to chug beer from a boot-shaped glass, and whoever finishes first wins. Somehow I get the feeling that complicated drinking games don't tend to last very long.Despite their many years of experience, the Old Dudes pretty much got their asses handed to them at ping pong, which I'll chalk up to being out of practice.

The game of flip cup, however, quickly turned things around. The Old Dudes were on point.

During their victory dance you can hear one shout, "Old sports rule!" Truer words have never been spoken. With the teams now tied, the winner of anchorman would be declared the victor overall. It was up to the Old Dudes to continue their winning streak, and they did not disappoint. Like, seriously, they brought a level of game that I've only ever witnessed the time I found myself in a basement full of hypercompetitive college baseball players in a drinking game tournament.

I think we can all agree that particular Old Dude deserves to go down in history for that chug. Gold stars all around.To watch the Old Dudes in all their glory, check out the video: