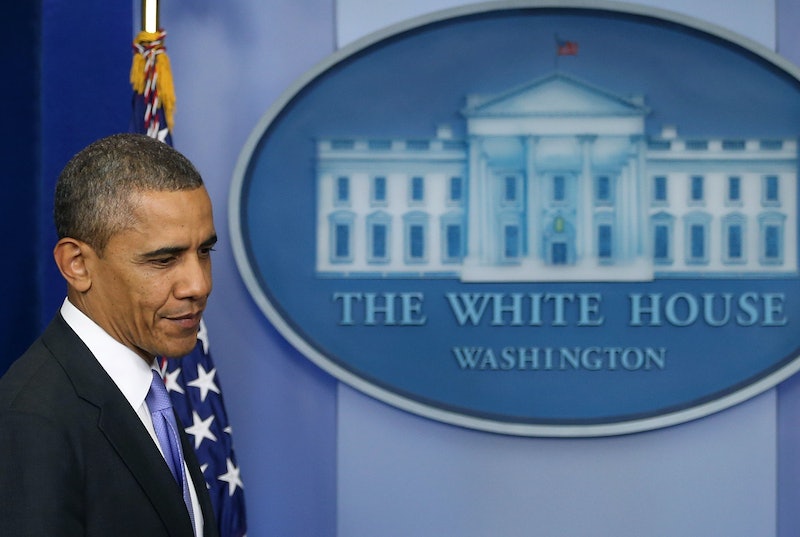 It's over: With a stroke of President Barack Obama's pen, the federal government is now open for business again, and a potential debt ceiling crisis has been kicked further down the road. Obama signed the law, which is widely seen as a victory for the President, shortly after midnight. This means that for federal employees, the unscheduled holiday is over: the Office of Management and Budget said that everyone should expect to return to work on Thursday.

And in a speech Thursday morning, the president used a lull in congressional activity to push his policy agenda, particularly immigration reform and a farm bill. The senate passed a version of the former over the summer, but the House has yet to take up the bill.

"Focus on what the majority of Americans sent us here to do. And that's grow this economy, create good jobs, strengthen the middle class, educate our kids, lay the foundation for broad-based prosperity and get our fiscal house in order for the long haul. That's why we're here. That should be our focus," he said.

Congress approved legislation to end the shutdown and fund the government on Wednesday night. After the announcement, Obama stated that he hoped this close call on avoiding a debt default would change the way congress views its job.

"We've got to get out of the habit of governing by crisis," Obama said. "My hope and expectation is that everybody has learned that there's no reason why we can't work on the issues at hand, why we can't disagree between the parties while still being agreeable, and make sure we're not inflicting harm on the American public when we do have disagreements."

Throughout the crisis, Obama reiterated his refusal to negotiate away crucial parts of his signature healthcare legislation, saying that those kinds of negotiations are tantamount to extortion.

Moderate Pennsylvania Republican Charlie Dent said he was glad that "cooler heads have finally prevailed,” though the final deal “must be supported, but it should not be celebrated." "It’s not a win for anyone, particularly the institution of Congress or the presidency for that matter," he said. "The bill represents the conclusion of a difficult period from which I hope that many can draw important lessons.”

The Senate reached a deal on a funding deal on Tuesday and announced it when it reconvened at noon on Wednesday. The agreement, hammered out by a bipartisan group of senators under the leadership of Senate Majority Leader Harry Reid and Minority Leader Mitch McConnell, will fund the government until Jan. 15 and raise the debt ceiling until Feb. 7.

But the close call took a toll on some Washington staffers, if not — as had been feared — on the economy. A House of Representatives stenographer had to be taken away on Wednesday when she suffered an outburst during the House's vote on the funding bill. The woman started rambling about God and Freemasons, saying, "You cannot serve two masters."