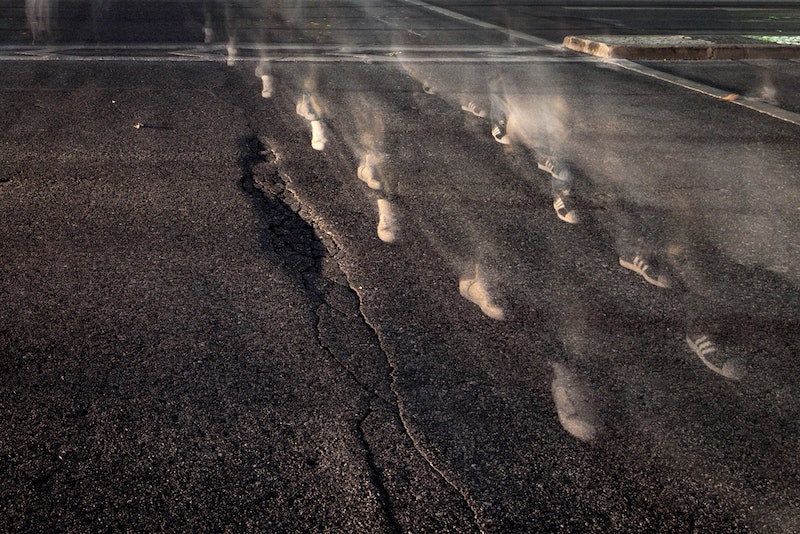 It's Saturday, so I'm sure a lot of you are planning on going out tonight. If you are, have a blast! If you're looking for an alternative, though, here's an idea: Why not stay in? Why not make a night of it? And why not curl up with a glass of wine or a mug of hot chocolate and spend the time scaring the pants off yourself instead? If that sounds like a perfect Saturday to you, you're not alone — that's definitely my idea of a good time, too. So here: Have a selection of lesser-known creepypastas to read. Because you weren't planning on sleeping tonight anyway, right?

First, a little history: Originally, the term “creepypasta” derived from “copypasta,” itself a bastardization of “copy paste.” Usually it refers to any text commonly copied and pasted on the Internet: Chain letters, those ineffective “I own everything on my page, Facebook!” message, and so on and so forth. Creepypasta, then, is its spookier cousin, a sort of digital update to the urban legends we used to tell each other in the dark at sleepovers when we were kids. According to KnowYourMeme, the word itself entered the vernacular courtesy of 4chan around 2007; by 2010, it was on its way to achieving widespread popularity (I credit a New York Times article, of all things, with bringing it to my attention in November of that year), and it's only been gaining steam since.

Over the past few years, creepypasta has continued to evolve; they've become longer, more involved, and often better pieces of writing as a result. Authorship, too, has entered the game — instead of creatorless tales passed down in folkloric fashion, a number of particular authors have begun to stand out as masters of the craft of spooky Internet fiction. As such, I would argue that the word creepypasta itself no longer refers to the copied-and-pasted short stories that it originally described. Instead, it's become a catch-all term for Internet-based horror fiction, with all of the advantages the medium presents: Although the stories are still usually anchored in text, they're now illustrated with photographs, videos, and much, much more. The willing suspension of disbelief has never been stronger.

A number of creepypastas are frequently cited as “The Scariest Creepypastas EVER” — but often, they're just the same 10 or so tales listed over and over and over again. So here, I've attempted to assemble together eight stories you may not have read. I've also avoided including any stories I've already written about in that “10 Scariest Internet Urban Legends” post that went up during the Halloween season.

Grab a chair. We've got some stories to tell.

There are loads of creepypastas out there about supposed “lost episodes” of favorite childhood television shows: Spongebob, Mickey Mouse, The Simpsons, and more. Some of them are good; some of them are…not so good; but none of them, I find, are quite as effective as the story actually titled “Lost Episodes.” Written by Christopher Howard "Slimebeast" Wolf, who is perhaps best known for “Abandoned by Disney,” it asks some questions about where all those lost episodes might have come from. What if they weren't actually “lost?” What if one person — one single, solitary, person — was responsible for each and every one of them? And what happens if that creator throws too much of themselves into their work?

A lot of pastas use the “found object” form — stories that were allegedly found in abandoned notebooks or on mysterious hard drives and so on and so forth. But “The Little Pink Backpack” does it in a way that most of them don't: In its truest form, it consists of pages scanned from a little girl's diary, complete with shaky handwriting and childish drawings. Originally simply called “The Story of Lisa,” writer and illustrator Sunny Shreiner first got the idea when she spotted a big pad of paper of the type elementary school kids use while browsing a store one day. She bought it, along with a pack of 96 crayons, and went to work. What emerged was the story of an imaginary friend who may not be so imaginary…and what happens to those who cross the little girl over whom she stands guard.

You know how easy it is to waste hours “traveling the world” via Google Maps Street View and Google Earth, right? That's what “Satellite Images” taps into. It's not the most innovative of creepypastas, but I like the “cautionary tale” aspect of it; it hearkens back to folk tales and the sorts of urban legends we used to tell around campfires when we were kids. Its effectiveness lies in its simplicity.

But be careful while you play armchair traveler — you might stumble upon something with which you're utterly unequipped to deal.

It's not unusual for weird things to happen while you're taking or developing a photograph; indeed, we love these kinds of oddities, because they give us the illusion that we've captured something otherworldly, even when we know it's just a double exposure or whatever. But sometimes you can't explain what made a photograph go wonky — all you can do is puzzle over it before burying it in your archives and eventually forgetting all about it.

But in “Anomaly,” someone has dug up those archives, and the stories attached to each photograph…well, they're not the kinds of things you can easily ignore. A photograph of some school children from the turn of the century, for example, whose images are all blurred — a detail no one noticed until they all perished in a fire. Or a photograph of a Civil War soldier with some damage inflicted upon it — damage which mirrors the injuries he suffered in the war. Or a photograph of a girl at the last moment before she fell prey to a series of auditory hallucinations that would plague her for the rest of her life.

What if someone decided to take all those images and turn them into a book? What happens when those sorts of images are reproduced and scattered throughout the world?

The “typing awareness indicator” is already the worst…but you have no idea exactly how awful it can be. If you've been looking forward to Unfriended, this one will be right up your alley. Just wait till you see exactly what Annie96 is typing.

Sometimes referred to by the last line of its first installment — “If you see her, turn off the game”— this one hits all the same nostalgia buttons as “Ben DROWNED”; it's not quite as immersive as that one, but it's still worth a look. Anyone who's ever spent time playing video games has experienced a freaky glitch or two…but what if that glitch isn't a glitch? What if it's…something else? And what if that glitch starts finding its way into every single game you play? “The Princess” gives a whole new meaning to the concept of a computer virus, and if you ever see her, there's only one thing you can do: Turn off the game.

Science gone wrong and the consequences of playing God are both common themes in creepypasta (and, indeed, of literature itself — hi there, Frankenstein!); it's what's made “The Russian Sleep Experiment” such a classic, although to be honest, I never found that one particularly frightening. I think it's the lack of plausibility, especially toward the end of the tale. “Kagome Kagome,” which takes its inspiration from the unethical human experimentation performed during World War II, also suffers from some similar clumsy writing — but there's something about it that gets me anyway. I highly doubt that humans actually have a “kill switch” that can be activated or deactivated at will… but if it did exist, I imagine what happens in this story would be the outcome.

Kagome Kagome, by the way, is a Japanese children's game kind of like Ring Around the Rosie.

I'm not totally sure this one can rightly be called a creepypasta; it's much more than just an old urban legend, updated and copied and pasted countless times. Then again, most of the stories seen here are more complex than the earliest examples of creepypasta, so maybe that's just the way the form has evolved over time. Anyway, what I like so much about “200 Phenomena in the City of Calgary” is the way it takes something familiar — in this case, Calgary, located in the Canadian province of Alberta — and makes it strange. It offers the idea that, hiding below the surface of the Calgary most of its citizens and visitors see, is a different Calgary — a Calgary riddle with mystery, with a secret history, and with the impossible made possible. I've written at length about it elsewhere, but imagine, if you will, a disused office in the basement of the city's main university containing a typewriter that types an alternate history of the world all by itself. Or imagine a bookshop full of books no one should read — ever. Or imagine a mall with all the rejected products that have ever been created — including many that would have changed the course of history. And imagine it's all tied up in a narrative that's more than the sum of its parts.

More like this
26 Ghost Story Podcasts To Get You Ready For Halloween
By Jessica Booth, Mia Mercado, JR Thorpe and Emma Carey
15 Easy Pranks To Play This Halloween
By Emily Kelley and Lauren Grant
You've Probably Never Heard Of These Strange Products That Make Life SO Much Better
By Maria Sabella
TikTok's Butter Board Might Be The New Cheese Plate
By Emma Carey
Get Even More From Bustle — Sign Up For The Newsletter