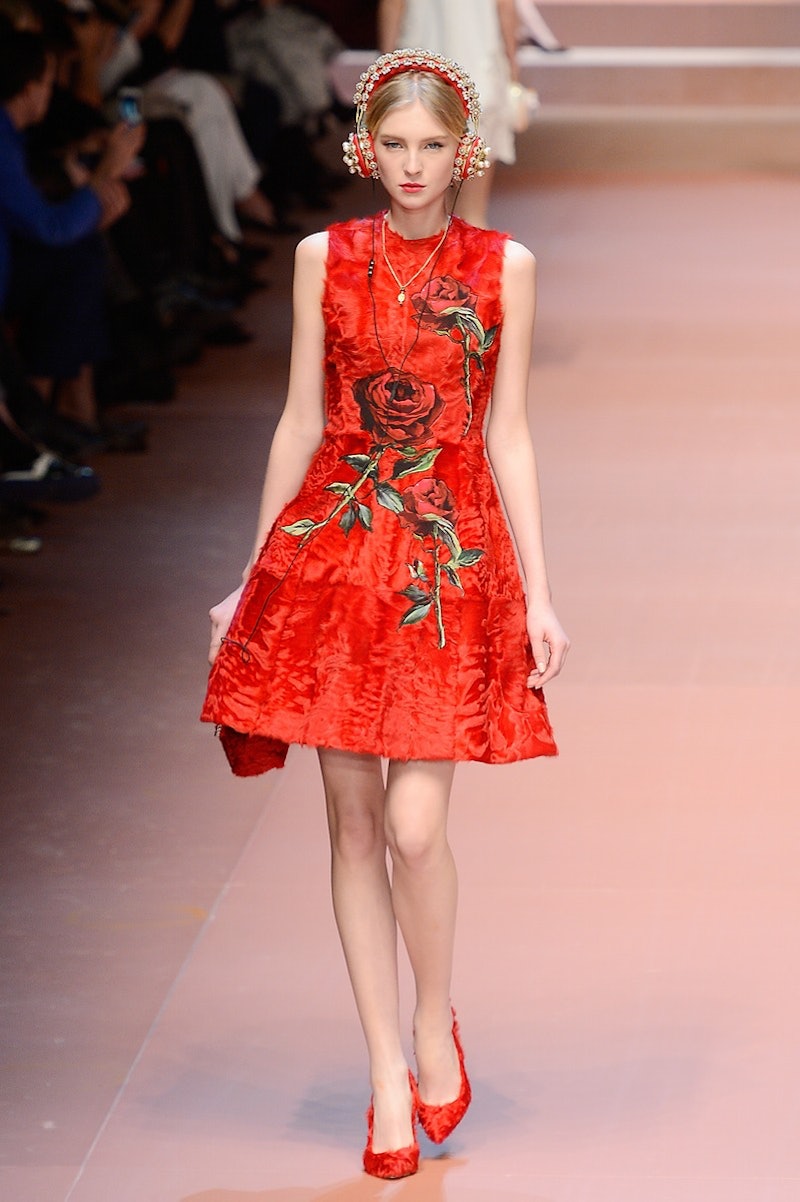 Honestly, my biggest struggle is deciding whether I can afford a latte over the more modestly priced black coffee. So when I heard about Dolce & Gabbana's $7,000 headphones, I thought, that's like, 3,888 times I could've gotten guacamole at Chipotle. But these came with a serious price (ba dum tss) because now, Dolce & Gabbana is being accused of stealing a woman's design for their headphones.

The headphones were part of Dolce & Gabbana's Fall 2015 collection and could cost up to $8k for the fur-lined ones. Made of leather and covered in the brand's jewelry, the headphones were made with materials like pearls, gold chains, velvet, and Swarovski crystals, according to The Daily Mail. These headphones were originally made just for the runway, but with increasing popularity, were made available to the public thanks to a collaboration made with technology brand Frends.

Colombian artist Adriana Duque is suing the company because she claims that they stole the idea from her. She began seeing these headphones on taxi advertisements and claims that the designs were clearly taken from a series of photographs she had shot featuring women and children wearing adorned headphones.

What's that saying? Imitation is the sincerest form of flattery. And I must admit, the Dolce & Gabbana headphones look shockingly similar to those in Duque's photographs. But who's to say they weren't inspired by something else? And in fashion, as is with most arts, ideas and designs are recycled and reinvented. Who doesn't love a little ice here and there?

We're not sure who is going to win this battle, but one thing's certain: Dolce & Gabbana are not having a good week.

And here are Adriana Duque's designs:

What do you think? Coincidence or no?

More like this
These Are The Best Socks A Woman Can Buy
By Lisa Fogarty
Tilda Swinton’s Neon Yellow Hair Is More Than A Style Statement
By Justine Knight
15 Chrome Nail Polish Colors For An Easy, Mirror-Like Manicure
By Audrey Noble
The Beauty Industry Disrupter From Dallas
By Jordi Lippe-McGraw
Get Even More From Bustle — Sign Up For The Newsletter