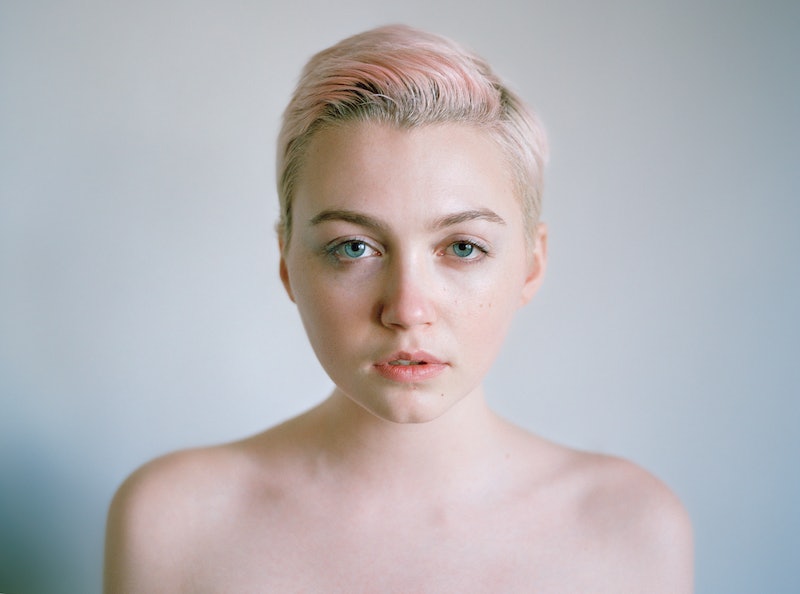 In 2010, New York-based photographer and filmmaker Jessica Yatrofsky released a now famous series called I Heart Boy. It featured hairless, androgynous young men posing nude in dimly-lit apartments. Yatrofsky's intention for the project? To put a spotlight on the male nude — "its beauty, its mystic energy, its taboo, and the attitudes people have toward it". Now, Yatrofksy has released a raw new series called I Heart Girl and it reveals a haunting look at gender identification and female sexuality.

Yatrofsky's intention for each series was to focus on the fluidity of gender and sexuality. "It's an impossible task to de-sexualize women," she told VICE magazine. "I think sexual identity is important for the self and I care about celebrating and honoring what resonates with how each subject chooses to express herself. I'm merely capturing and presenting a facet of women, what the viewer does with that information is her business!"

Most of the I Heart Girl subjects are photographed partially or fully nude. Yet, no matter the amount of clothes — or lackthereof — the subjects are neither objectified nor defined by gender. According to VICE, Yatrofsky believes nudity is less about sexuality and more about vulnerability: the act of showing up and shining humanity through external gender identification.

"It's funny how a hand full of nude portraits create the illusion that everyone in this series is naked and I like that," said said. "I think this happens because all of the subjects convey a vulnerability. While I don't think it's necessary to be naked to capture vulnerability I think it interesting to see subjects both clothed and unclothed existing side by side in my work."

The photos are proof that simple can be deeply impactful — seeing "women" in a variety of colors and forms reminds us that femininity is truly fluid, and best defined by each of us on our own terms. Black, white, hairy, hairless — all these women exude an intuitive beauty and sensuality. Seeing women in their rawest, most authentic form makes me wonder why we ever stand for media and societal censorship, expectation, and definitions surrounding the female body and gender.

"Women as sexual objects is an idea that's been in place since the beginning of time," Yatrofsky told VICE. "I think it's important to push boundaries and keep moving towards a more realistic expression of the body in relationship to sexuality." Amen, girl!

Yatrofsky is releasing a book based on the I Heart Girl series, available in May. You can preorder it here. And you can buy the book for her I Heart Boy series here.

More like this
Berriez Founder Emma Zack On Her Size Inclusive NYFW Show
By Dominique Norman
The Best Plus-Size Looks From New York Fashion Week
By Dominique Norman
The 12 Best Strapless Bras That Won’t Slip & Fall Down
By Audrey Williams and BDG Commerce
Help! I'm Not Getting Any Attention On Dating Apps. What Can I Do?
By Sophia Benoit
Get Even More From Bustle — Sign Up For The Newsletter