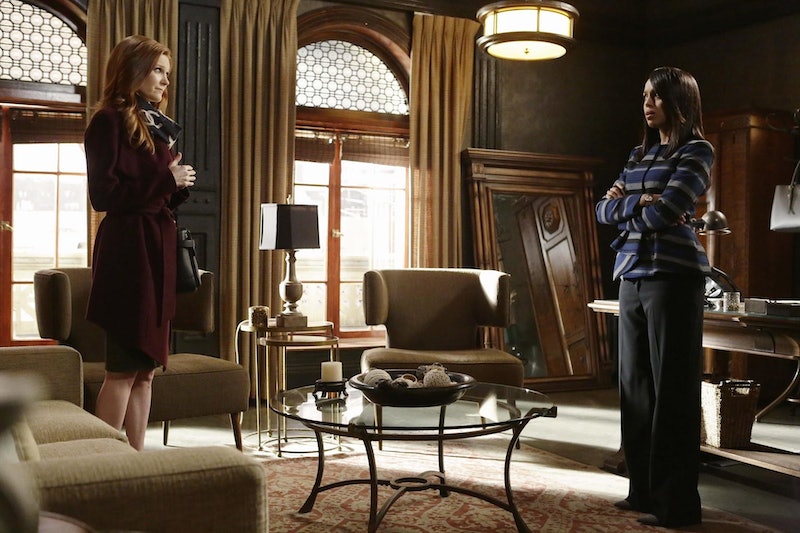 This season on Scandal has been Abby's chance to finally step up and become a power player in her own right. But on the this week's Scandal the show not only showed Abby as a successful career woman, but also delved into some of the sexist double standards she has to face in her position. Because being White House press secretary is awesome, but the spotlight isn't always fair.

In the episode, Abby's boyfriend Leo faces a potential sex scandal from a revealing tell-all book by a woman named "Kinky Sue." You get the idea. And as they wait to see if the story will break, Abby prepares to hand in her resignation in anticipation of the fallout. And when Leo presses her about why this is necessary, she responds by spelling out a few things that have apparently gone over his short, arrogant head.

Yes, she tells him, the press does write about the news she delivers from her podium, but they also write about her. "If I wear lipstick I'm dolled up, if I don't I've let myself go," she explains. People speculate "if I'm trying to bring dresses back." People complain about "repeat outfits even though I'm on a government salary." They say she's too skinny. They joke that maybe she's on a hunger strike until there's a Democrat in office. And in every story about her, they mention her relationship to Leo. "So people can be assured that there's a man who wants me," she sarcastically explains.

In the eyes of people who write these stories — in other words, the eyes of the media at large — Abby's world must revolve around Leo. He must always be mentioned as part of her life. And the fact that her world doesn't actually revolve around him is irrelevant. If Leo goes down for a sex scandal, Abby would fall with him. And even if Leo isn't aware of it, Abby is.

The whole speech is an important moment on a show that's already very good at calling out sexist double standards and standing up for feminist principles. Seeing a show not only give a female character an empowering new job that she grows into and eventually excels in is great, but it's made all the more so when the show draws attention to the additional obstacles she's had to overcome to get there because of her gender — including the issues that she can't overcome, the ones that will always just be there, like the way the press talks about her. Because no matter how hard women work or how successful we become, those double standards will still be out there, embedded into society. And seeing that reality validated on television is important.