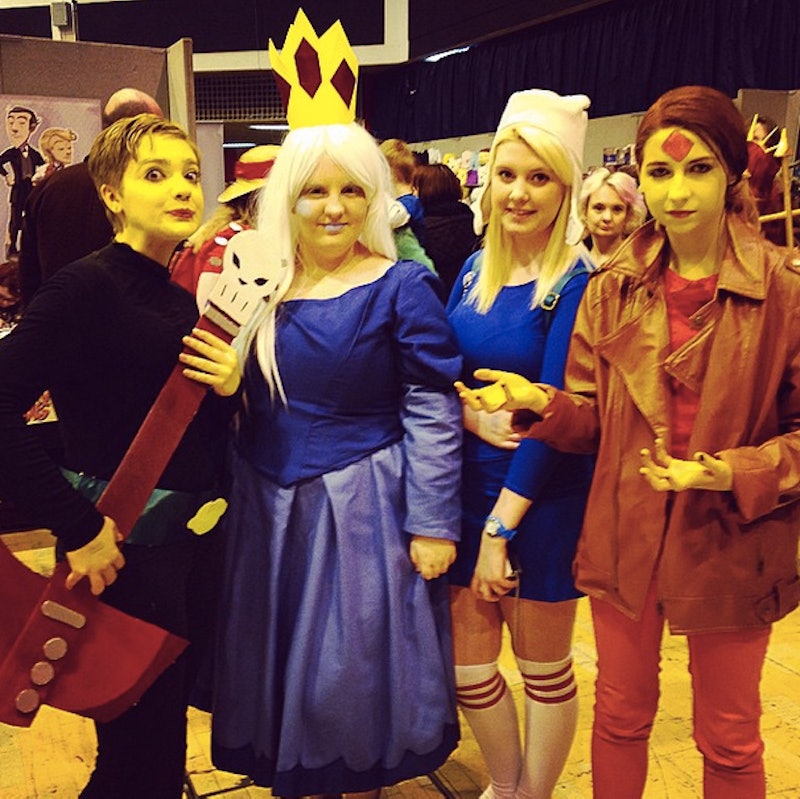 Ever since I attended my first comic convention, I’ve been intrigued by cosplayers. (I seem to be naturally drawn towards things that encourage dressing up, no matter their form.) Whilst I’m not into video games or knowledgeable enough on comics to know many of the characters being portrayed, there’s something I’ve always loved about seeing cosplayers at these events. Literally meaning "costume play," how can the practice be anything other than fun and games?

But I decided to delve a bit further into the cosplay world. My starting point was to look into why people cosplay. Obviously all cosplayers have their own take on this, but the recurring theme is simply "because it’s fun." It’s a way of indulging in your fandom of a particular book, game, movie, etc. by having the chance to immerse yourself into one of the characters' personas. Cosplayer Meagan Marie points out in her article "Why Do I Cosplay" that there’s also a great social aspect — anyone who has ever donned a costume for Halloween will know that it's an easy conversation starter — and if you’re cosplaying as a fairly well-known character, chances are you’ll bump into some comrades from your own universe along the way.

The realm of cosplay can be a hugely creative one. Whilst some cosplayers buy their costumes, many opt to create or customize them. One such notable cosplayer is Dust Bunny, who has over 193,600 likes on her Facebook page, posting regular tutorials and selling signed prints and handmade items on her Etsy store. Amongst her many other cosplay creations, she has created some surprisingly elegant gowns based on Pokemon's Pikachu and Studio Ghibli's My Neighbour Totoro.

This is the cosplay that excites me most — when people create their own interpretations with a different take on ubiquitous characters such as these. I once met a girl in a Victorian-style dress with crinoline and corset, entirely in cutesy bright pink and purple, with a fantastic fascinator and wig. I didn’t know if she was cosplaying a particular character — or just dressing up in general — but when I asked her, she informed me that she was a "human version of a My Little Pony character."

As well as the creative side, there’s also the aspect of fantasy and escapism. As Meagan Marie puts it, "I want to play in worlds where magic is real and superheroes take to the sky to save the day.” Who wouldn’t? I’ve written before about the importance of play and how dressing playfully can give you permission to do so, and cosplay is a more obvious form of that. You want to feel like Wonder Woman? Actually be Wonder Woman for a weekend, then! The environment of comic conventions and cosplay meet ups means you’re surrounded by other people who get why you’re dressed up, so it can be a more comfortable environment in which to do as such.

However, the cosplay world sadly does not offer an entirely safe space for play and imagination. Cosplayers have spoken of their struggles with being criticized or outright bullied for being the wrong size, gender, race or body type for the character they’re portraying. I was saddened to come across a website devoted entirely to shaming cosplayers — particularly those deemed "too fat to wear that."

Tabitha Grace Smith of Doctor Her writes of how this attitude meant that her first cosplay experience was also her last, whilst a commenter on the post hits the nail on the head: “It’s all fantasy, right? That’s the whole point.” Those who shame others for not fitting the image of their character are entirely missing the point. They are also implying that cosplayers do what they do for the gaze of others. Whilst for some there is an element of this — after all, cosplay masquerades and competitions exist, and some cosplayers now actually make a living out of it, which does rely on people wanting to look at you — the point of cosplay for many is to indulge your fandom and your fantasy. To become a character you admire, to imagine and to play; for your own entertainment rather than that of others.

It would be impossible to write about cosplay, comics and video games without touching upon the issue of objectification. "There seems to be an impression from those external to the cosplay community that the hobby is sexual at its core,” continues Meagan Marie. “The belief I’m seeing echoed is that we craft costumes with the ultimate goal of being objectified by strangers.”

Now, I’ve been to a few comic conventions and I have witnessed my fair share of objectification of this kind. Maybe I assume the worst, but I have felt incredibly uncomfortable seeing older, non-cosplaying men photographing female teenagers in revealing cosplay outfits. One convention I attended even had Page Three glamour models in signing booths alongside comic artists — the presumed relevance being what? Sexiness? The objectification of women?

Many girls and women in cosplay wear very sexualized, revealing costumes because that’s what many female characters actually wear in video games and comic books. Even those of us unfamiliar with these genres are aware of the images of Supergirl and Wonder Woman, for example, with their tiny waists, powerful thighs and sumptuous gravity-defying bosoms. I’m not suggesting, of course, that the image of Superman is a realistic one for men. But type "cosplayers" into a Google Images search and the majority of images are — you guessed it — sexy women. Most, albeit not all, of the images on the Cosplay Train Wrecks shaming site are currently of women, too. Vox writer Alex Abad-Santos points out that "what you have to keep in mind about cosplay is that the source material mainly comes from comic books… and the representation of women in that material hasn’t always been realistic or body positive.”

Meagan Marie is all too familiar with the risk of being objectified as a cosplayer, after a photo of her on a popular cosplay blog sparked a conversation of over 100 comments about the size of her breasts in relation to the size of the character’s breasts — something she describes as “dehumanizing." She clearly stresses that she has no problem with people dressing to be sexy, but that this isn’t her intention in cosplay and that even “if someone does find something I wear sexy, I do still expect common decency and respect in our exchanges.” That’s not too much to ask, is it?

I’ve never really cosplayed as such, but I do love dressing up and I once wore a very unofficial Wonder Woman style outfit to somebody’s birthday party. Whilst I wore black leggings to make the outfit less revealing and, in retrospect, I looked, well, pretty hot. I just felt incredibly self-conscious the whole time with the way people were eyeballing me. Although it’s kind of unreasonable to expect strangers to not look at you when you’re dressed as Wonder Woman, it’s what people do with that visual information that can be problematic; it’s the reaction to the sight — you can choose to be respectful, but some people choose not to be.

Dust Bunny recently asked her Facebook followers what they thought the biggest problem within the cosplay scene was. One of the recurring themes was an echoing of Kristen Hughes’ statement: "Acceptance of all cosplayers needs to happen. Too many people hate on others for not being the right size, gender, color, etc.,” as well as many discussing the issues surrounding "sexiness" in cosplay.

Body positive cosplay sites are also out there, and the "cospositivity" movement is aiming to "put the play back into cosplay." Whilst the cosplay world, like our world, is far from perfect, it’s great to see these discussions happening, to try and shake away the judgement and negativity and distill the scene back to its core value: fun.

More like this
Rupert Grint Just Shared A *Major* Update About Ron Weasley’s Future
By El Hunt
I Tried Kendall Jenner's No-Pants Look As A Plus-Size Woman
By Sarah Chiwaya
Instagram & Facebook May Finally Lift Their Notorious Nudity Ban
By Allie Fasanella
Twitter Is Overjoyed By Angela Bassett’s Record-Making Oscar Nomination
By Maxine Harrison
Get Even More From Bustle — Sign Up For The Newsletter
From hair trends to relationship advice, our daily newsletter has everything you need to sound like a person who’s on TikTok, even if you aren’t.