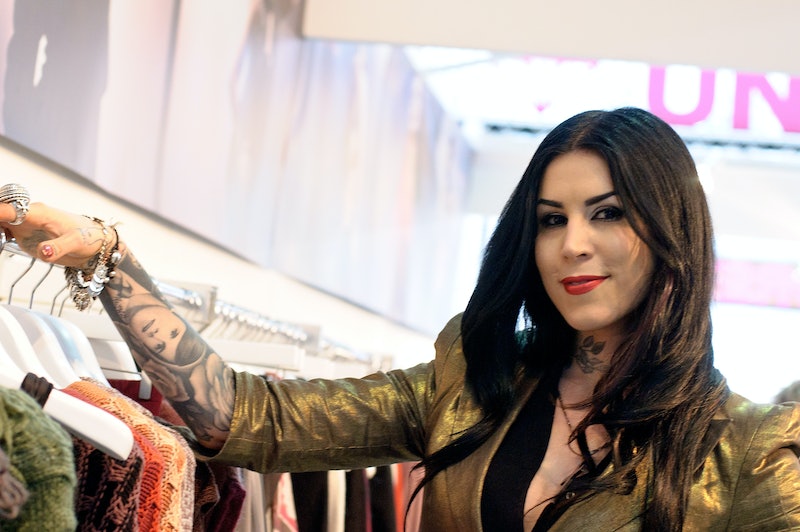 Earlier this week, the Internet erupted in outrage over the title of Kat Von D' lipstick, Underage Red . While questions have been raised and an outcry has occurred regarding the connotations behind the word underage, Von D won't apologize for the lipstick moniker.

This isn't the first time that Von D has been in hot water for the name of a product. Back in 2012, the tattoo artist turned cosmetics developer released a shade entitled Celebutard. Hm. That shade has since disappeared, but Von D's returned to playing the questionable name game.

In a statement on her Facebook, Von D attempted to clarify the rationale behind the lipstick name stating:

"'Underage Red' was one out of four lipstick shades that I released at the very start of the makeup line, seven years ago. It launched, alongside 3 other variation of red shades: 'Hellbent,' 'Misfit,' and 'Lolita.' Out of those 4 shades, 'Underage Red' was the matte, borderline-neon, fire-engine red," she continued. "I clearly remember wearing a variation of this shade when I was 16 years old. I also remember the feeling of wanting so badly to go see a specific concert at this age, and not being able to get in to the venue because I was underage. Back then, I was already deeply in love with punk rock music, and although in the eyes of many (including my parents), it may have been inappropriate for me to be wearing lipstick. But i [sic] did."

Her rationale does make sense even if I don't full comprehend it. However, I also remember being 16 and desperately wanting to appear older and sexy. So promoting a shade that seems to celebrate a girl's desire to move past her adolescence too soon does put me on edge.

Von D didn't finish her statement there. She defended her integrity and brand stating:

"These wild, and horrific accusations proclaiming that any aspect of my makeup line would ever promote the degradation of women, statutory rape, sexual behavior, human trafficking, underage drinking, or even idealization of fleeting youth, goes against everything I stand for. So, please excuse me if I find those articles and comments appalling and inaccurate...So, NO. I refuse to sacrifice my integrity and creative freedom. NO. I will not be pulling 'Underage Red' from my collection. And NO. This is not an apology."

I definitely don't believe Von D ever meant to endorse any of the horrible behaviors that she mentioned. While an apology clearly isn't coming from Von D, I'd honestly settle for an acknowledgement of how the title is problematic.

More like this
15 Must-Have September Beauty Launches, According To Our Editors
By Rachel Lapidos
This Week’s New Makeup Releases & More Beauty Headlines
By Audrey Noble
Billie Eilish Teased The Debut Of Her New Fragrance
By Audrey Noble
26 Easy Halloween Makeup Looks For 2022 That Require Zero Skill
By Olivia Rose Ferreiro
Get Even More From Bustle — Sign Up For The Newsletter