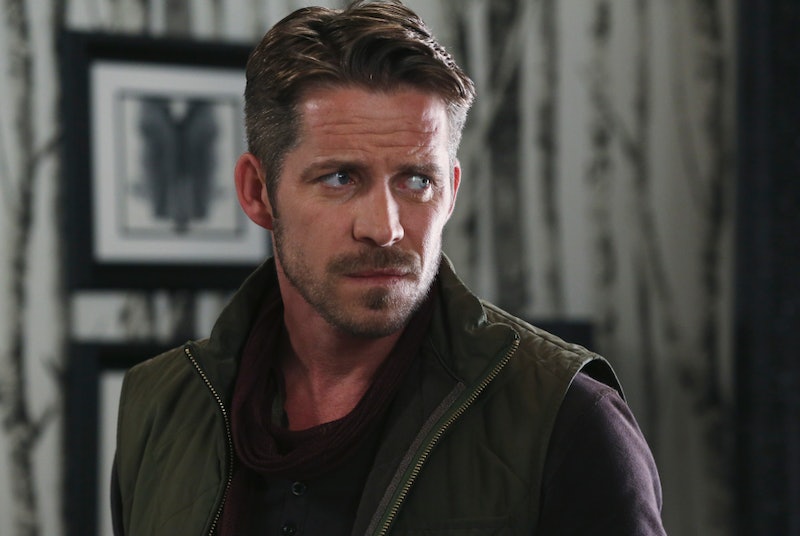 Oh, Robin, you confusing son of a bow and arrow. A new sneak peek of this week's episode of Once Upon A Time shows Robin Hood and Regina together again, happily making out, and it's left fans very confused. We want to be excited, but it's hard when the last time we saw Robin, he was leaving Storybrooke, seemingly forever. In all likelihood, the promo was probably a flashback, dream sequence, or Rumple messing around with Regina. However, I haven't lost hope, because there are still a few ways Robin could return to Storybrooke, and most importantly, to Regina.

Between Regina, Rumple, and Maleficent, there's plenty of dark magic to assist in Operation: Mongoose. If they find the author, Regina's plan is to make them write her a happy ending, which of course will have to include Robin Hood. But in all honesty, I don't think finding the author is the only solution to bringing Robin and Regina back together.

Sean Maguire, who plays Robin on the show, has been popping up in too many backstage moments with the other actors for me to believe that he's gone for good. Maguire even mentioned in Once Upon a Time: Secrets of Storybrooke that he is still rooting for Robin and Regina — which makes me believe there's more to tell. The battle between good and evil is only beginning, but in the midst of it all, one of these potential occurrences could be a catalyst in Robin's return.

They Get Rid Of Magic In Storybrooke

I'll be the first to admit that I was anti-Henry back when he was trying to rid the world of magic. But considering the circumstances, the kid had a point. Think about it: if any of the major villains lacked magic, including Rumple, all would be well and good in Storybrooke. Without magic, Marian would be capable of surviving there — in which case, why not move back?

Unfortunately for Marian, her heart remains frozen because Robin's True Love's Kiss didn't work on her. But that doesn't mean someone else's won't. Let's face it, their marriage is at its end, so I have to wonder whether someone out there can break Marian's spell. I'm not suggesting that she'd leave Roland behind with Robin to start a whole new life, but if someone else thaws her heart, she could return to Storybrooke with her family and new love.

This definitely isn't the ideal scenario, especially since Robin has already gone through the loss of Marian once and it would be heartbreaking for Roland, but OUAT has killed off a member of a love triangle before (RIP Neal), so I wouldn't be surprised if they did it again.

If the snow queen's scroll brought Rumple and the Queens of Darkness over the town line, is there any reason it can't do the same for Robin? If his memories are in tact and he knows where the town line is, he should definitely be able to spend some weekends in Storybrooke.

Realistically, all it would take to get Robin back into the picture is a quick game of catch over the town line. After all, this isn't The Enchanted Forest where cell phones don't exist. Why hasn't she called him yet? Please, OUAT, bring back Robin, and give him some bro-bonding time with Hook while you're at it.

More like this
The 'New Amsterdam' Series Finale Opens An “Unexpected” Door To The Future
By Brad Witter
Netflix Shut Down 'Bridgerton' S3 Rumours About A “Very Dark” Storyline
By Bustle
Bill & Frank’s 'The Last Of Us' Episode Has Twitter Emotionally Wrecked
By Alyssa Lapid
This 'Gossip Girl' Wardrobe Error Has Gone Viral On TikTok
By Alyssa Lapid
Get Even More From Bustle — Sign Up For The Newsletter
From hair trends to relationship advice, our daily newsletter has everything you need to sound like a person who’s on TikTok, even if you aren’t.