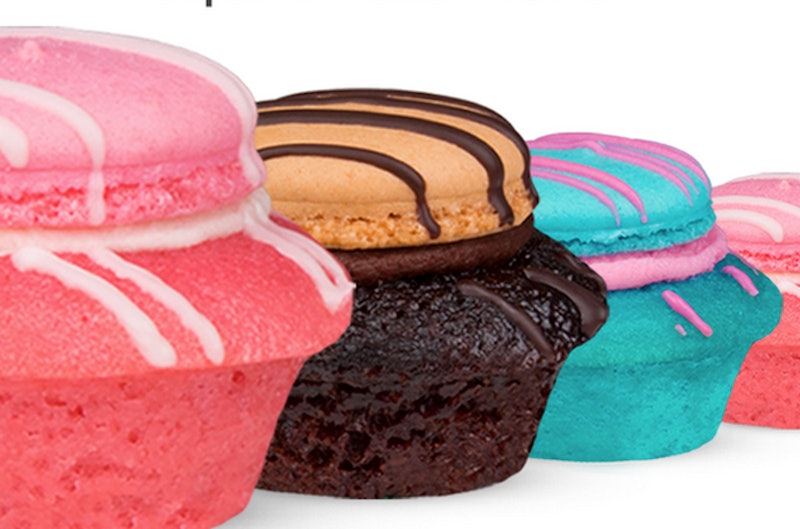 I usually wait until at least noon to get so jacked up on sugar that I scare innocent passersby, but today I had to make an exception. Today is the day that Baked By Melissa launches the cupcake-macaron hybrid, or "Cupcaron," which I truly believe is humanity's ultimate destiny. It has taken me 20-some years to fulfill it, but I am proud to say that I stormed one of the many New York locations mere minutes after their 8 a.m. opening with the kind of swagger I imagine Kanye has on his birthday. And oh, my friends, this Cupcaron was well worth the wait.

A bit of history on the Cupcaron: Baked By Melissa only announced the creation of this life-changing hybrid dessert this past Tuesday. Basically they put a tiny macaron shell on top of their tiny cupcakes, a feat which is so simple and yet so brilliant that I don't know how it took us all this long to make it happen. It comes in Cotton Candy, Strawberry Cream, and Chocolate Graham, and you can bet whatever your butt was baked by that I have tried every single one of them and I HAVEN'T EVEN HAD COFFEE YET.

Here they are, nestled on the Baked By Melissa shelves in all of their sinfully sugary glory.

The verdict? The Strawberry Cream one is basically a strawberry-frosted Pop-Tart for very fancy people and basically makes your taste buds scream for spring. Cotton Candy was so delicious that I went in for seconds, but, oh good God, if you love chocolate, you have to try the Chocolate Graham one. I'm not even sure who I am anymore after eating it.

LOOK how beautiful they are. Also, please praise me for the self-control it took to take this picture, because half of them were bitten into within five minutes of taking it. I'm pretty sure I'm going to be incapacitated for the rest of the day.

No sweat if you're not in New York, because you can order your own online and pretend that you're going to share them even when you're 100 percent going to gobble two dozen of them in one sitting. (Letting that happen is easier than you think.)

The Cupcaron is, of course, far from the first dessert hybrid to make history. If you're looking for another dessert bastard child to fully wreck your heart's capacity to pump blood in 2015, you have SO many options!

You would think that we'd be over this by now, but apparently we are not. I just passed the line to the original store and it was out the door and full of people I was too scared to contend with. Thankfully you can get a recipe for it here (even if it will take you like 6 million years to make).

Otherwise known as the Bagel-Croissant, courtesy of Crumbs.

The donut cannoli hybrid you can only get in South Philly, unless you're ambitious enough to try this on your own (i.e., shove a donut and a cannoli into your face at the same time).

I'm surprised time didn't just stop after this was created. Like, bye, earthlings, you've officially reached the peak of what you can achieve and you're done using this planet now, make room for some other organism that still has stuff to learn. If you want a piece of this, you have to head to Robicelli's in Brooklyn, and also fight me, because I'm about to attempt to eat it all, other people be damned.