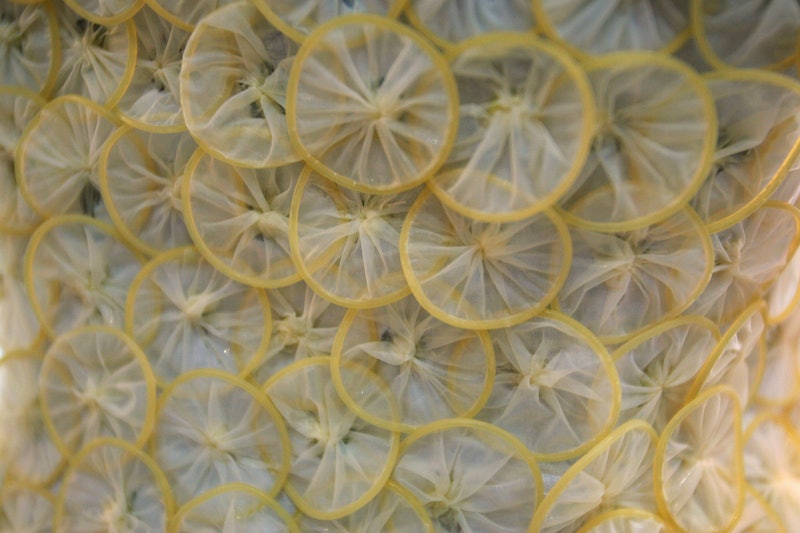 Here's a great example of condom sense. Yuk yuk yuk. Sorry, but seriously? This guy who hotboxed a condom is a prime supportive case to back my argument that potheads are, for their many annoying qualities, the most creative people you will ever meet. Notice I said "creative" and not "good at planning ahead". Because although the prospect of crafting a pipe from a handful of Starbursts sounds impressive in theory, it kinda fails to nod at the very real possibilities of the sticky candies melting into a sort of lava wax on your hands and when you're stoned and likely already slow to respond, that's a hurdle we shouldn't deliberately set up for ourselves. Or at least I wouldn't want to. Nonetheless, I applaud that kind of dedication to anything, even getting high.

So now we have this guy who miraculously stretched a condom over the entire top half of his head before puffing a vape pen, exhaling through this nose, thus filling the condom with smoke. Gettin' THC floaty while spreading the good word of safe sex (because, clearly, that's what he was trying to do here). He is hotboxing a condom, you guys. This is real.

I have a lot of questions, although the first seven are various forms of, "WHY? WHY IS THIS HAPPENING?" Here are other questions I have about this:

1. How did he get the condom on his head anyway?

Did he partially inflate it then go for the painstaking pulling-over-head portion? Or is his head especially pointy in a way that allows him to roll it on as if instead of a head, he actually had a big ole' penis?

2. How does the spermicide interact with the pot smoke?

That stuff is potent and I can't imagine, super healthy to inhale in such close quarters and so concentrated.

3. What kind of condom is that, anyway?

This might make for one of the only cases ever in which I'm mildly interested in whether or not the rubber is flavored and therefore scented.

4. How many times did he have to practice before this video?

5. Does this guy ever get laid?

Is this what he does instead with all his condoms?

To be way honest, this was surprisingly difficult for me to watch all the way through. Suffocation seems too real of a possibility and I'm not into that. That being said, I'm thankful I grit teeth and made it through to the very end because that pop followed by his shriek. Oh boy.