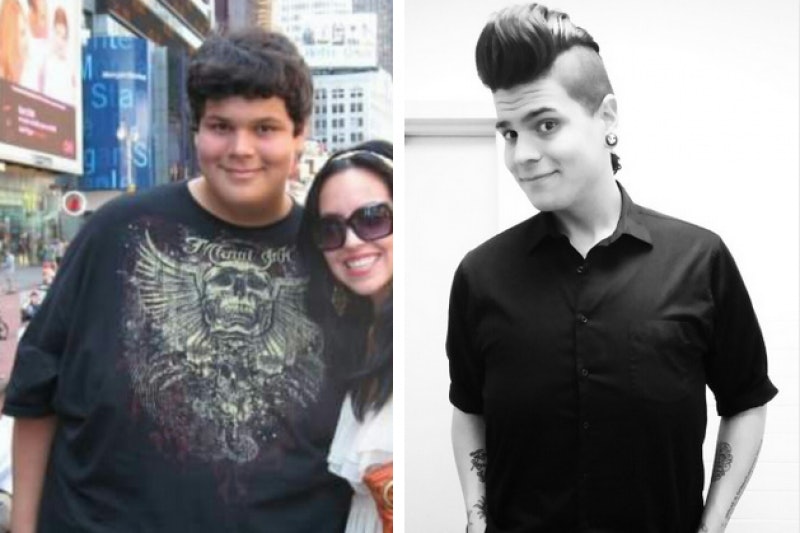 Matt Diaz is well-known among his Tumblr followers for always being open and honest about his history with weight loss. A frequent poster of on fleek selfies, he will often juxtapose images of himself today versus images of himself six years ago, before his 270-pound weight loss. But the most impactful image that the 22-year-old writer and comedian has shared was a body-positivity video posted to Tumblr showing the excess skin resulting his weight loss, which he says he has vigilantly kept hidden since he reached his goal.

"I'm scared people won't find me attractive anymore, I'm scared all the nice messages will stop," he says in the video to his fans. In a message of true vulnerability and strength, he goes on to say, "I wanted to share with you guys because I think it's important that I'm not ashamed of who I am. I worked really hard to get here and I still don't have the body that I want, but I'm trying really hard, I love myself."

What Diaz is experiencing is not uncommon among people who have experienced major weight loss. At the age of sixteen, he was the subject of a study at the NYU medical center that tested out lap-band surgery on teenagers. As a result, he is now down from 497 pounds to 220, but even though he works out every day and maintains the healthy weight, he has lived with the excess skin since it happened.

And here are some of the images from the video he posted to Tumblr:

According to Diaz, the only way he can get rid of the excess skin is through surgery, which is why he has launched a GoFundMe page. The reaction to his body positive video was met with such an outpouring of support that he has already well surpassed his initial goal of $20,000 to cover the procedures for his arms, chest, and stomach.

Diaz's message has not only resonated with people who have experienced the same problem, but has gone far beyond him. When asked what the most unexpected part of sharing the images of his body on the internet, he answered:

"A really surprising side-effect were the number of transgender people who've thanked me saying that they understood my struggle, even though their body-related insecurity grew from different roots. I'd never even begun to [think] of what that must be like, and the fact that my message could help even though my problems began somewhere else is really incredible."

He recently shared another video to Tumblr to express his gratitude for the backers on the project, share plans on his future surgeries, and continue encouraging those who were inspired by his original post.

He also had a message for people who are struggling to make peace with their own bodies the way that he has:

I want you to remember that you are not the problem, certain aspects of society are the problem. You'll constantly be told that you're too heavy or too tall to be attractive, or you're not masculine or feminine enough, or that your skin isn't the right tone or your hair isn't the right color, and these people are always always always wrong.Luckily, we're slowly starting to see these ideas get phased out by modernity. Plus-sized, unretouched models are getting more attention in major brands, more attention is being put on the alternative scene for high fashion, it's becoming clear that these negative ideas are not going to last, though it's going to take a while."

More like this
Bennifer, Kravis, & 14 Other Fun Celeb Couples Halloween Costume Ideas
By Emma Carey and Brittany Leitner
Why Harry Styles & Olivia Wilde Make A Great Couple, According To Astrology
By Nina Kahn
Help! I'm Not Getting Any Attention On Dating Apps. What Can I Do?
By Sophia Benoit
The 12 Best Strapless Bras That Won’t Slip & Fall Down
By Audrey Williams and BDG Commerce
Get Even More From Bustle — Sign Up For The Newsletter