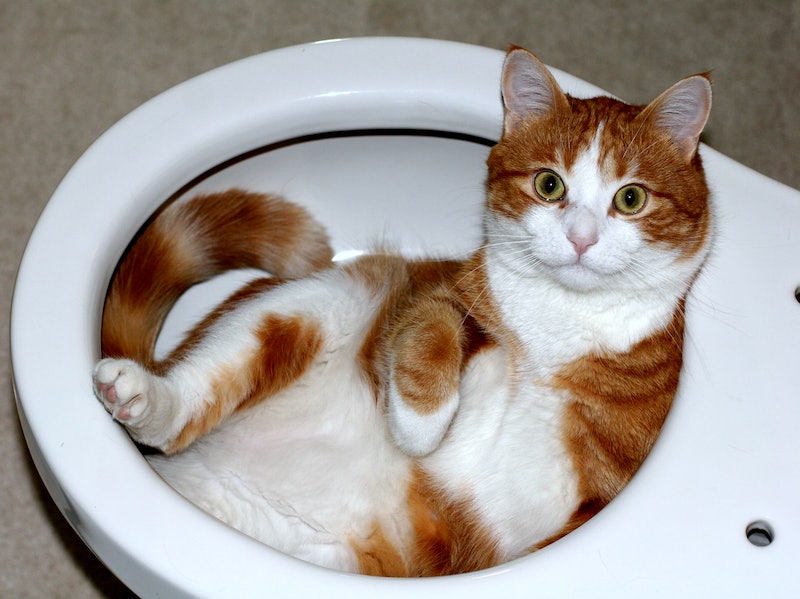 If you're a dude and you're already lifting the toilet seat to pee, congratulations, you're halfway there! Everyone is very happy that you're realistic enough to admit that your aim is imperfect, and that lifting the seat now is easier than wiping up a bunch of pee later. But unfortunately, one other lingering bathroom issue remains: are you putting the seat back down afterwards?

If you care even a little bit about the ladies that you share your house with, you should be willing to spend one second going out of your way to flick the toilet seat up and down in order to help them avoid the sad, soggy fate of accidentally falling in the toilet. Seems simple enough. But for some reason (cough, cough: casual misogyny), a lot of men have gone to a lot of trouble in order to justify leaving the toilet seat up.

In fact, an economist at Michigan State even went so far as to develop an economics-based theory about why leaving the toilet seat up is OK. You know what would have taken way less time that researching and creating a graph about how it's OK to leave the toilet seat up? Putting the damned toilet seat DOWN. And that economist is far from the only dude to put their extensive education to work developing complex theories about why falling on your ass into toilet water after they leave the seat up is simply not their problem.

So, if the dude in your home feels like his energy is best used arguing that leaving the toilet seat up is somehow ethically defensible, please feel free to print this article out and tape it to the inside of the toilet lid/his face.

In fact, a 2012 study conducted at a British teaching hospital found that feces-borne, diarrhea-causing bacteria can spray from the toilet during a flush, with the bacteria then settling on nearby surfaces. So there you go: protect yourself from ever having to describe yourself as suffering from the effects of "feces-borne diarrhea-causing bacteria" and level out the toilet seat movement workload in one swoop — just by keeping the whole damned thing closed whenever you're not using it.

Look, you're already going to put the seat down whenever you poop, and up when you pee. So, no matter what, there are situations where you, as a man, are going to have to flick the toilet seat up with your hand, exposing yourself (and thus, the household) to germs from the seat. If you put the seat up every time you pee, you are now both coming into manual contact with the toilet seat.

However, if you take one second to flick the toilet seat back down after you pee, you're not exposing yourself to any new germs that you didn't already touch while flicking the seat up. And you're also preventing your female housemate from touching the seat, thereby exposing her to toilet germs — which, if they make her sick, can potentially be transmitted to you at a later date (particularly if she is a "lady-friend," rather than just a lady who is a friend).

The point here to minimize the number of people who have to touch the toilet seat. (Seriously, is this what modern day chivalry has come to?)

No matter how you style them, toilets are always kind of gross, due to the fact that they are giant tubs of water that we poop into. But when the toilet seat and lid are down, we're at least spared the visual reminder left by the splatter of pee (and whatever else) that often ends up on the underside of the toilet seat.

If you're dedicated to leaving the seat up, are you also dedicated to cleaning the toilet of all unsightly stains at the day's end? Oh, what was that? You can't discuss this because you have to go make some more toilet graphs? I thought as much!

4. Someone Will Fall Into It If You Leave It Up

No one ever expects the seat to be up in the middle of the night. If you're sleepy, thinking about something else, or just not looking closely, it is very easy to not notice that the toilet seat is up, and accidentally plunk your butt into germ water or onto the nasty rim.

Women are not the only ones who can accidentally fall into toilets. Some men pee sitting down all the time — they just don't want to admit it because of the social taboo. Men also get up in the wee (sorry) hours to poop, or even pee sitting down because they're tired, and fall in just because they weren't anticipating a raised toilet seat.

Is this how you want your house guests to remember you? As the guy who made them take a toilet water bath because he thought leaving the toilet seat up was some kind of moral high ground?

You're not going to find the best reason to put the seat down by doing a side-by-side analysis of how often men and women poop, because the motivating factor behind putting the seat down isn't efficacy or speed; it's manners.

It's probably speedier to slam doors in people's faces or knock over elderly people taking their sweet-ass time on an escalator, too — but we don't do that, because life is already enough of a hellscape nightmaretown, and ultimately, being courteous to someone else for a few seconds makes your day/life much better than acting selfish in the same of efficiency.

6. Because Nothing About The Bathroom Is Fair For Women

You think it's not fair that you have to take an extra second to put the toilet seat down? Sure, fine, it's not fair! But nothing about going to the bathroom is fair for women. It's not fair that we have to take down their pants to pee, thus making the entire act take longer, or that we have to pee more often, creating a log jam in public restrooms (most of which only offer the same number of facilities as the less-crowded men's bathroom, by the way).

It's also not fair that women are supposed to roll their used pads and tampon applicators in toilet paper, so that they don't offend the delicate sensibilities of anyone who sees them in the bathroom trash. It's not fair that evolution placed our pee holes so laughably close to our *other* parts! Nothing about going to the bathroom is fair for us. Hell, most things about being a woman in our ENTIRE society aren't fair. Which brings us to, last but not least ...

7. It's A Really Easy Way To Show Some Solidarity

Every single thing we do in our society is a complex dance of privilege and disempowerment — even using the bathroom. Putting down the toilet seat won't make you less masculine, it won't take up your valuable time, and it won't prevent you from earning $1 for every 82 cents a woman makes.

Just put the damned seat down.

More like this
The 19 Best Tweets & Memes About Bisexual Awareness Week
By Lexi Inks
These 4 Signs Are The Seductive Sirens Of The Zodiac
By Brittany Beringer
Black Women's Equal Pay Day Highlights An Upsetting Problem
By Brandi Neal
Are Quality Time & Gift-Receiving Love Languages Compatible?
By Lexi Inks
Get Even More From Bustle — Sign Up For The Newsletter