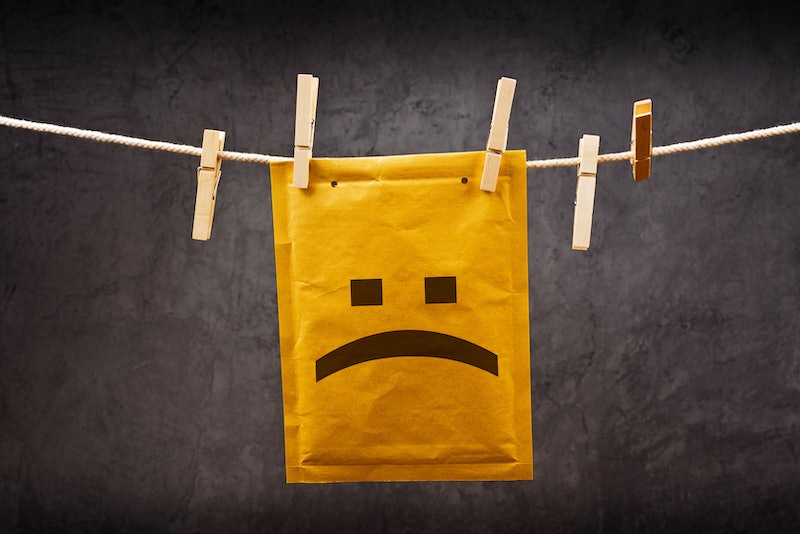 We already know there's a tie between emojis usage and sex, but a new study just found that emoticons are impacting our love lives in more ways — and this time it's all about Facebook jealousy. The study, led by Dr. Denise Friedman and published in Cyberpsychology, Behavior and Social Networking, discovered there's gender difference in jealousy when it comes to perceiving emoticons in social media messages. Researchers asked a group of undergraduate students to imagine that they were in a committed relationship and had to borrow their significant other's laptop (you can see where this is going *cringe*). Their partner's Facebook was open, of course, and there was a message from someone of the opposite sex saying, “What are you up to later?” Participants were randomly assigned a message either with an emoticon or without one and were asked to respond to the situation.

While this is the first time the impact of emoticons on social media jealousy is being studied, it's not the first time we're seeing research on Facebook's impact on our love lives. Facebook is now considered a leading cause of divorce and it can even predict divorce. I think we also know couples who have fought over Facebook interactions, whether it be a friend request, message, or status update.

The study found that women show more jealousy on Facebook in general, but researchers think the different reactions to the emoticons are due to the difference between how men and women view infidelity.

I think one thing we need to clarify is who is this person sending a message to their partner? Is it someone they both know? An ex? Someone he/she regularly talks to? That would make a huge difference in interpreting this suspicious winky face and whether or not this person is a lying cheater. Give us more details, science!

Researchers have been on a roll lately studying our online interactions, which makes sense because a lot of us are scratching our heads and debating with our friends over what they mean. While yes, a winky face may be seen as flirting to some and "wanna hook up tonight?" to others, it also could be used as a friendly gesture.

The thing is, emoticons mean different things to different people and I think a lot has to do with how the person receiving the message uses emoticons, too. If you rarely use emoticons, regardless of your gender, wouldn't you read into a kissy face a bit more? Whereas someone who practically speaks in emoji faces might not think twice over a wink here and a heart there. Emoticons are a pretty new language for us, let's not let them totally ruin our relationships just yet.