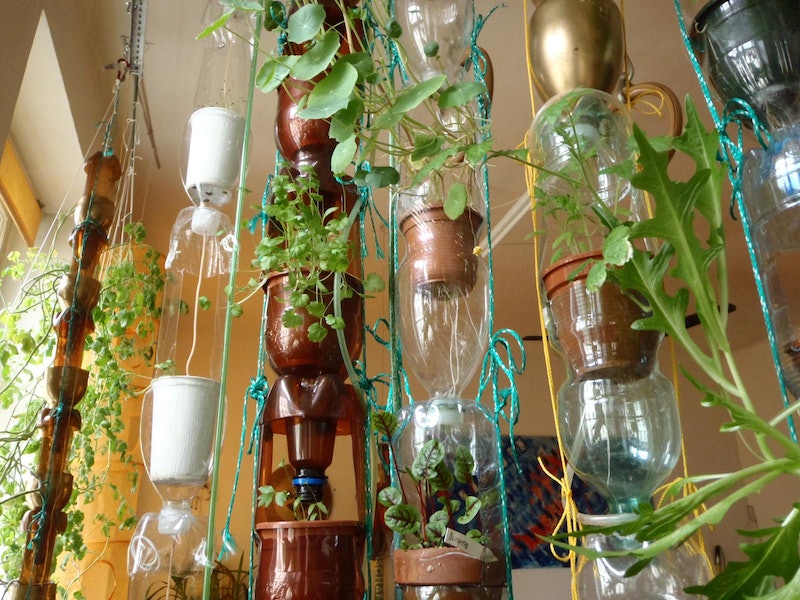 The idea of a robot chef isn't exactly anything new. Getting something mechanical and precise to do the chopping and steaming seems like a pretty good idea: in China, for example, one restaurant's food is entirely prepared by robots. And the idea of an in-house cooking robot which can whip up meals for a family is taking the tech world by storm; one idea looking for funding, the Cooki, claims to only need a recipe selected and the ingredients placed in a tray, and it can do the rest itself. (Though at the moment all the robot can do is stir stuff a bit.)

But fancy robots aren't the only way that tech is making our kitchens insanely futuristic. There are some much smaller, and sometimes simpler, gadgets for sale that make it really clear that when it comes to the kitchen, we aren't in Kansas any more. Kitchens are often at the forefront of affordable tech revolutions, because while not everybody might own a TV or a car, everybody eats — hence the big investment in things like Internet-linked fridges and electric egg freshness-checkers. (Yep.)

Here are seven new foodie inventions that prove that the sky's the limit if you've got a science degree, an empty stomach, and enough imagination.

3D-printing food? Old news. The PancakeBot is making headlines for doing precisely what it claims to do: printing out elaborate pancake designs onto a sizzling custom hotplate.

The only problem thus far is that the bot only uses one pancake-nozzle, which means that some bits of the elaborate designs are going to be cooked through faster than others. But if you're seriously into the idea, head over to Kickstarter and boost its budget.

This one is such serious business that it's government-funded. While we've known how to molecularly analyze food for a while, the Thai government is taking authentic flavor to the next level with their E-Delicious robot, which measures the chemical signatures of any food that claims to be properly "Thai" against a golden standard.

If it fails, it flunks the government's test, and doesn't get to call itself authentic Thai food. (But the government, nicely, has also provided prospective cooks with proper recipes to make sure their dishes pass muster.)

A variety of latte printers exist in the world, and all with one purpose: to "print" digital images onto the top of your morning coffee. That elegant swirl your barista does with just cream and a stick is soon to be completely outmoded.

It's a bit too difficult for everyday use as of yet (some companies are doing it for special occasions, like Chinese New Year or Valentines Day) so you'll have to mostly rejoice in your old-fashioned handmade cat picture on your cream. For now.

Doubtless after one too many nights in the lab instead of out on the town, a British scientist has invented the Levitron, a machine that creates levitating cocktails. Why? Because why not.

The science gets tricky — the alcohol is "suspended" in ultrasonic sound waves that levitate it in drops off the ground, rather like anti-gravity — but it might soon be coming to that hipster bar that enjoys fiddling around with nitrogen and smoke near you.

This is the most low-tech of the inventions, but it's still pretty amazing — and resoundingly successful. After a high-profile Kickstarter campaign, Windowfarm launched its invention, a set of hanging gardens designed to sit in front of your apartment window. The techie bit? There's no dirt involved — just water and nutrients, pumped regularly into the pots on a timer.

It was only a matter of time before somebody got the iPhone involved. Fortunately, nobody's taught Siri how to critique your cooking technique (yet), but a company called Range has a bunch of thermometers for different dishes, from sugar to meat, that plug straight into your phone and allow you to monitor temperatures.

The one problem with this one seems to be keeping your phone very, very far away from potential gloopiness/wetness/burning — but the cables are 4.5 feet long and can be magnetically pinned to keep them out of the way, so I guess we might be safe for now.

IBM has been dabbling in robotics for a while, but their latest use for their artificially intelligent creation Watson is culinary. Watson's currently being billed as the newest chef on the market for people looking for serious cuisine — because it's been filled with the chemical profiles and cooking tendencies of every ingredient the creators could think of, and left to, well, stew.

Matching ingredients through chemical compounds is something we do naturally by taste, but Watson is coming up with some truly avant-garde compositions based on what chemicals they share, and even has his own cognitive cookbook.

Living in the future, people.

More like this
20 Smart Devices Under $35 That’ll Change The Entire Vibe Of Your Home
By Emma Carey
16 Kitchen Products You Need For Cooking A Holiday Dinner In A Small Space
By Barbara Bellesi Zito
How To Turn Off Night Mode On Your iPhone Camera
By Emma Carey
Behind The Hilarity Of The "POV: You Walk Into My Room" TikTok Trend
By Lexi Inks
Get Even More From Bustle — Sign Up For The Newsletter