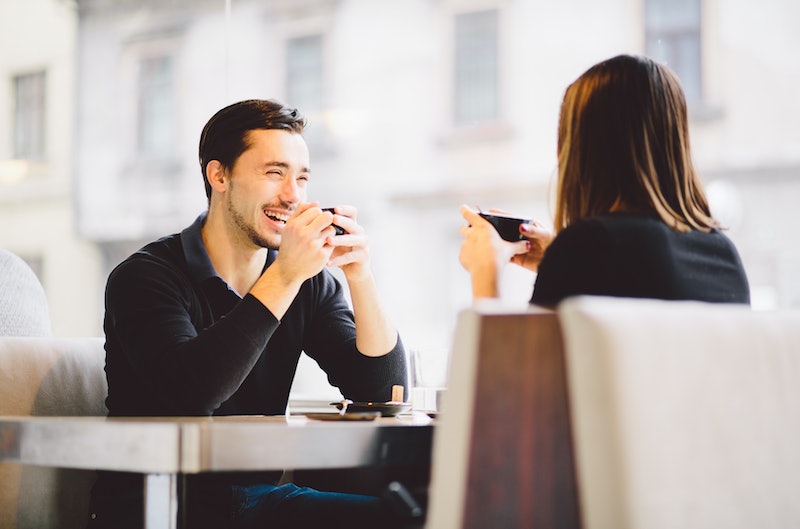 Dating can be the social equivalent of playing Russian roulette with your bank account — both of you reach for your wallets, and deciding who should pay for dates can be a game of persistence and sheer willpower. American Express Spending & Saving Tracker recently aggregated data on the spending habits of heterosexual couples to answer our burning questions about how frequently the respective sexes cough up the cash for those pricy artisan cocktails. Because this is 2015, damn it, and chivalry goes both ways.

In a recent survey from NerdWallet of more than 1,000 American adults, they found that 77 percent of couples think men should pay the bill on first dates, and men were the more likely of the two to feel it was their responsibility to front the tab. “Who’s expected to pay for a date may seem trivial — some would even argue that covering the tab is a form of respecting women,” points out Joe Pinsker at the Atlantic, “but there’s reason to believe that this minor, ‘benevolent’ form of sexism can lead to a fraught question of what the man is then owed.” And breaking those traditional molds of gendered expectations are just as necessary as a mutual interest in treating your partner to a nice meal.

The American Express data was compiled similarly using a random sample of 1,713 adults, but found that a significantly lower 49 percent say the man should pay (down two percent from last year — hell yeah, ladies!). So it seems that the timeworn habit of men being grabby about the check seems to be on its way out (or at least with AmEx card holders). But their data is a little more expansive, breaking down not only who should pay but also how much is spent on average. Here’s how the first date spending habits of those surveyed break down:

49 percent: People who think the man should pay the bill

31 percent: People who think the person who initiated the date should pay

54 percent: A declined card was the last straw for an otherwise interested party

12 percent: Folks who think the tab should be split

49 percent: Adults who say contesting the bill was a deal breaker

48 percent: Adult who claim an offer to split the bill sealed the fate of their date

It looks like we have our work cut out for us yet, gang.

More like this
10 Ways To Be More Empathetic To Your Partner
By Raven Ishak and Lexi Inks
Think Your Partner Is Cheating? These Tarot Cards May Confirm Your Suspicions
By Kristine Fellizar
Shonda Rhimes' Net Worth Makes Her One Of The Wealthiest People In TV History
By Hugh McIntyre
How Much Are The 'Schitt’s Creek' Stars Worth?
By Hugh McIntyre
Get Even More From Bustle — Sign Up For The Newsletter