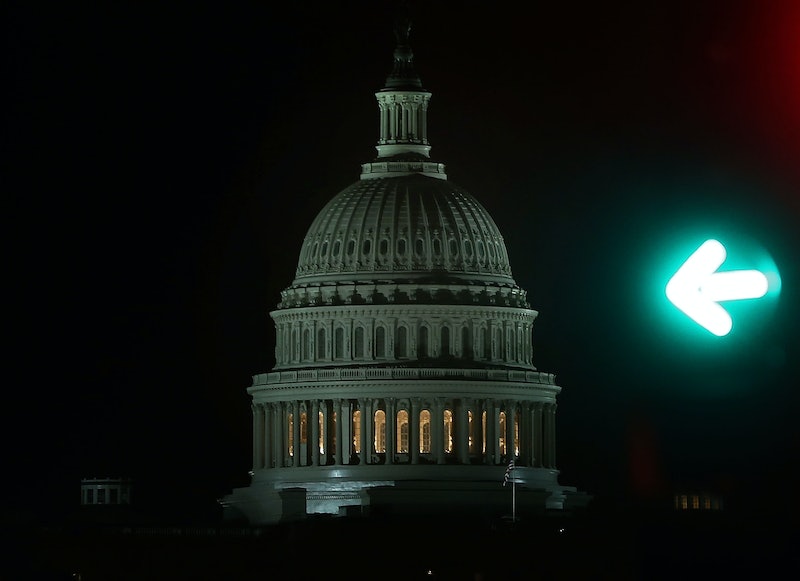 Is it any wonder that after the absurdist last few weeks our government has had, someone would publicly unravel on the floor of the House? Dianne Reidy, the official stenographer of the House of Representatives, was led out of the chamber during the government funding bill vote Wednesday night in the midst of a rant that could have come straight from The Da Vinci Code. The reportedly well-liked employee launched into a monologue about religion and freemasonry before two men escorted her away and the vote resumed.

"They were very gentle in taking her out because they know her,” said congressman Peter King. “It was very shattering really. She lost it … she went absolutely berserk. It’s a very sad story.”

Videos of the event show Reidy gripping her podium and hanging on as two men pried her hands off. "[God] will not be mocked," Reidy shouted. "The greatest deception here is that this is not one nation under God. It never was. It would not have been. The Constitution would not have been written by Freemasons. They go against God." (Wikipedia’s helpful article on Freemasonry states that some Christian dominations are wary of masonry because its structure conflicts with church doctrine. A belief in a “supreme being,” though, is a requirement for many masonic groups.)

Apparently Reidy continued to yell “You cannot serve two masters. Praise be to God. Praise be to Jesus” even after being escorted off the floor. Reidy was reportedly taken for a psychiatric evaluation after the unexpected outburst.

Fox News, of course, thinks she wasn’t having a psychotic episode but rather a religious experience. Fox & Friends co-host Steve Doocy read aloud a letter from a minister that said what Reidy was “doing was known as an exercise of the gifts of the spirit where she was, she had brought a warning and a message from God regarding the activity, he felt, there in the House." (The letter apparently didn’t clarify how the Freemasons fit in, or why this happened when the crisis was over.)

“I think there’s a lot of sympathy, because something clearly happened there,” Democratic congressman Gerry Connolly told The Washington Post.

It is a little poetic that an outburst like this punctuated the end of a two-week-long battle in Congress about funding the federal government and making sure that the country didn’t default on its national debt. Results of Reidy’s mental health evaluation haven’t been released, but something tells us that despite her breakdown, she’s not the nuttiest one in that room.