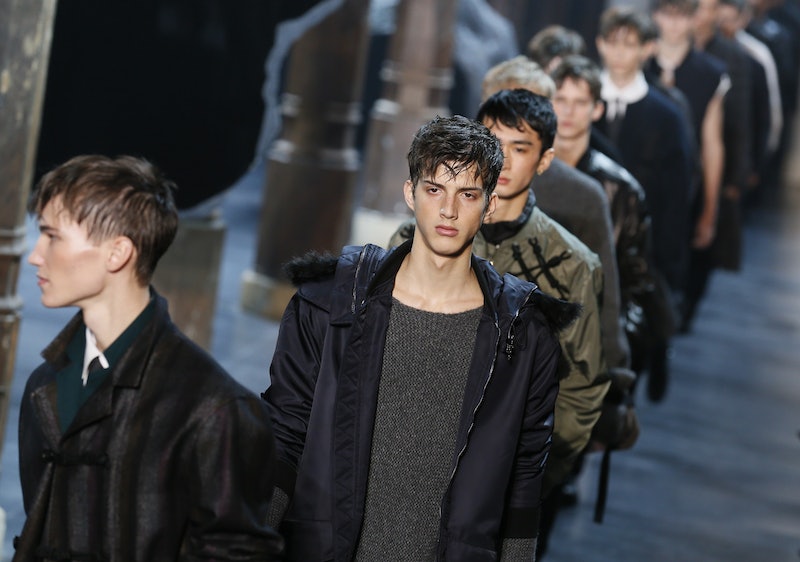 In a BuzzFeed video that has received over a million views since it was posted earlier this week, a group of models demonstrate how male beauty is perceived throughout the world. Titled "Men's Standards of Beauty Around The World," the clip manages to drive home the point that there is a glaring lack of diversity when it comes to the "ideals" of beauty, but to be honest, it could be better.

Black, Asian, and Hispanic models appear alongside the majority of white models used, yet based on the comments that the video has received, it's just not diverse enough. Each model featured represents a specific country and what that country's idea of male beauty is, from the American "lumbersexual" (complete with man-bun), to the "Germanic features" of the mixed-race Brazilian, the "Sprezzatura" of Mr. Italy, and the macho/metrosexual standard of the Philippines.

Male body image and beauty isn't necessarily a new topic, although it certainly hasn't been discussed at length as those of women's. However, that is rapidly changing as the media is starting to focus more and more on the male form, from the hoopla surrounding Jamie Dornan in 50 Shades of Grey , to the release of the Magic Mike sequel, and yes, even Justin Bieber's Calvin Klein ads.

BuzzFeed's video stars male models that are supposed to symbolize "how drastically the physical attributes of the 'ideal man' vary across 12 different countries," but if the idea of beauty is always evolving on and off the runway, is it really fair to represent the whole world based on a dozen male models?

Their skin color aside (and yes, that is still a very important factor) each model is around the same height and body weight. This doesn't come across very drastic at all, especially when you consider Glamour 's sexiest men of 2015 that includes Adam Lambert, Tinie Tempah, and Joseph Gordon-Levitt, or a gallery of Asian male models that don't fall in the "macho" category, or even the first disabled man to walk New York Fashion Week.

One could argue that the "Men's Standards of Beauty Around The World" video doesn't really present anything new about what is considered beautiful throughout the world, especially when it uses models (whose basic job requirement is to be perfect human specimens) rather than delivering something more substantial and representative of what each country truly thinks is the perfect male image. Instead, it relies only on certain aspects of a country's culture, whether it's a Bollywood actor, a Korean pop star, David Beckham, or the Hemsworth brothers. Wouldn't it be better to take a cue from street style photographs that show true diversity?

The video has much more potential to show real male beauty ideals all over the world, if only the producers took more time to research their subjects and less time focusing on making the models look fierce for the camera.

Watch "Men's Standards of Beauty Around The World" below: