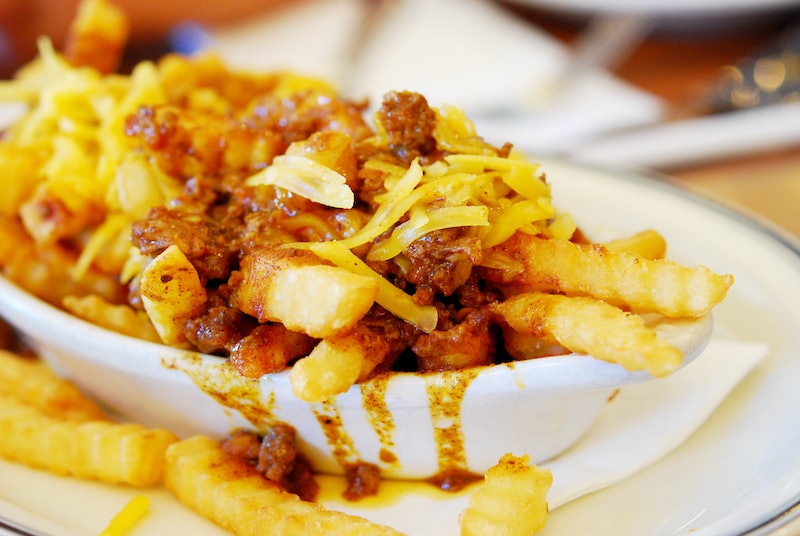 To make any recipe better, just add cheese. That's the mantra I live by. Morning, noon, and night, meals are better when they're sprinkled with shaved Parmesan or covered with slices of fresh mozzarella, whether it's an egg-filled brunch or a giant pan of macaroni and cheese. As for the beautiful pairing known to the world as cheese fries? Where do I even begin? One of cheese's best friends is potatoes, particularly when they're fried. Mean Girls' Regina George didn't say "Whatever, I'm getting cheese fries" for no reason. This is an indulgence that everyone should appreciate, all day, every day — for dinner, as a midnight snack, and when you're sitting down for breakfast. Yes, I said breakfast.

That's right. You may want to sit down — just not with Gretchen Weiners — because cheese fries aren't just for late nights at the bar, football games, and meals at Shake Shack anymore. You can have cheese fries for breakfast without anyone side-eyeing your plate, because this home fries and cheese curds recipe looks like a normal brunch dish. I first experienced this incredible combination at Perennial Virant in Chicago, and I haven't been able to get it out of my head since. Thankfully, Chef de Cuisine Ed Sura was able to give me the lowdown on how to re-create this dish at home. Here's everything you need to know to make your new favorite breakfast.

Since Russets don't have as much starch content, they hold up well to frying without getting soggy. To start, Sura says, wash your potatoes, prick them all over, and sprinkle with salt and pepper the night before you want to make them. Bake at 350 degrees for a little over an hour, then chill them overnight. If you want to try another variety of potato, he recommends fingerlings or small, red-skinned potatoes. Just don't go for Yukon Golds, which never get really crispy.

Sura says that frying or baking is acceptable, and both can render super crispy results. "Baking could even be better," he admits, but at Perennial Virant, they cut the cooked potatoes into chunks and deep-fry them at 350 degrees in grapeseed oil for 3-and-a-half to 4 minutes. If you bake them, go for a 450-degree oven for 20 to 30 minutes until browned and crisp. As a rule of thumb, one big potato will serve two or three people.

Don't shy away from lots and lots of cheese. "If there's more cheese curds than potato, you're doing it right!" Sura explains with a laugh. A ratio of 1:1 potato to cheese is perfect, though you can go for a 2:1 if you want to scale back. If you can't find cheese curds, you can use chunks of cheddar or Swiss — any harder cheese will mimic the texture and melt in a similar way. For an extra punch of flavor, Sura recommends trying smoked cheddar, like one from Nordic Creamery from Wisconsin that they use in an incredible grits dish at Perennial Virant.

Since this side dish is modeled after Canadian poutine (fries covered in cheese curds and gravy), you can make a breakfast gravy to go on your curd-studded home fries. Sura loves the herbaceous broth-based chicken sausage gravy they serve, but you can also go for a traditional milk-based sausage gravy. Eggs are a great topper, but sauteed vegetables and meat can also be tossed in for a complete dish. You could also transform this for dinner by serving them as a side dish to roasted meat or fish with a spicy sauce over top.

Eat Cheese Fries For Breakfast, Because The World Truly Is A Beautiful Place

Would you look at that cheesy potato goodness? Time to tuck in and enjoy.