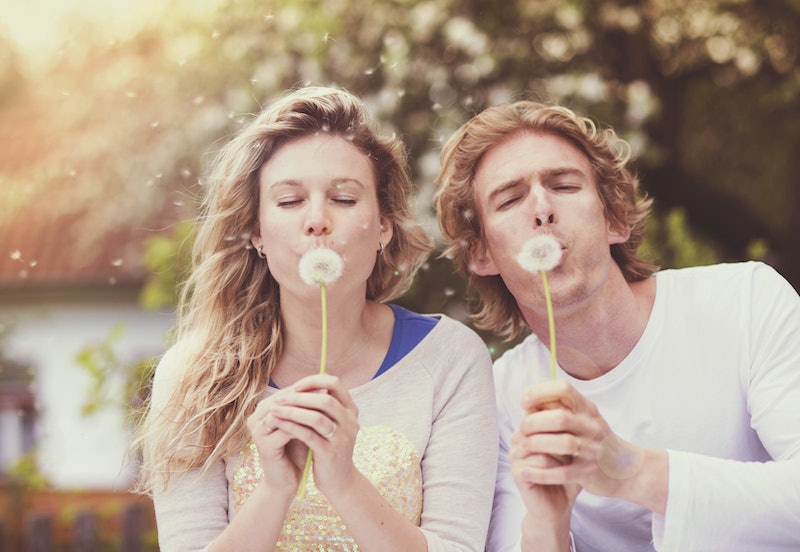 Today was the first official day of spring, which is hilarious given the two inches of snow accumulating in New York City as we speak. And according to new data reported by online dating app Zoosk, the impending warmer weather (if it ever arrives) means love is a-bloomin’. Its findings suggest that online dating rates go up in spring, with sunnier seasons seeing a sharp spike in intra-app communications, which is good news for all of us who’re currently dusting off our Tinder and OkCupid accounts (or that one for beard fetishists) that have remained untouched since late last year.

And an online dating proprietor would know a thing or two about seasonal dating. The fellas, particularly, make up the majority of dating app users (a fact that may appeal to the interests of a fair amount of women). “A whopping 62 percent of location-based dating app users are men, with only 38 percent being women,” reported Bustle’s Lucia Peters recently. “Furthermore, in news that surprises probably no one, the largest group of users fall into the 16-to-34-year-old age bracket: They account for 70 percent of location-based dating apps’ audience.” So whatever your preference in partners, no one can argue with that 70 percent demographic of millennials trying to win your affections. It seems the season is ripe with opportunity.

There are plenty of ways to date during the colder months, sure. Everybody deserves a kiss beneath the falling snow at least once, right? (Er, not me, but certainly someone.) But the warmer seasons offer a whole new field of date ideas and summer love. And Zoosk has some interesting information on how that pans out. It reports that spring brings a 34 percent increase in first message exchanges; a whopping 28 percent more deep conversations; and 11 percent more daily registrations. These are good numbers, people.

Here's the data in chart form for those of us who're spatial learners:

More like this
10 Ways To Be More Empathetic To Your Partner
By Raven Ishak and Lexi Inks
Why TikTok Is Flooded With Controversial Videos About "Pick Me Girls"
By Courtney Young
30 Clever Ways To Slide Into Your Crush's DMs
By Griffin Wynne, Carolyn Steber and Lexi Inks
How To Politely Reject Someone Who Keeps Asking You Out
By Laken Howard and Lexi Inks
Get Even More From Bustle — Sign Up For The Newsletter