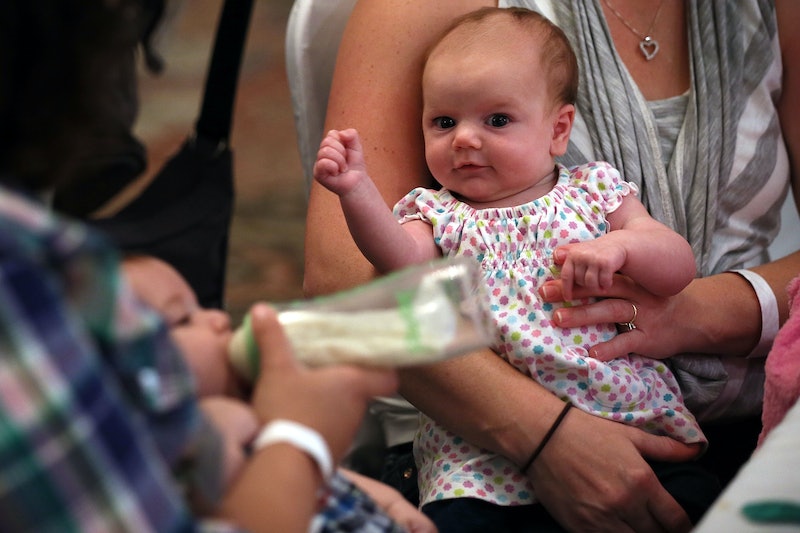 Gender roles aren't what they used to be — or rather, more and more people are willing to step outside of gender roles than there used to be. And as a result, we've reached the point where more men than women say they want kids. Though I'm sure the stereotype that women are the baby-crazy ones will continue.

Based on several recent surveys, it seems that although a majority of people of both genders want kids, men are more interested in becoming parents than women. In fact, in a nationally representative 2013 survey of childless adults, more than 80 percent of men said they were interested in having kids, while only 70 percent of women said the same — which is a pretty wide gap. So why are men more into the whole kid thing?

Well, one perspective is that since women take on more childcare responsibilities than men, women are just less inclined to take on the amount of work that having a baby entails. As historian and sociologist Stephanie Cootz told New York Magazine, "The younger generation of women is even better integrated into the workforce and feels like sometimes they’re forced to choose between having a meaningful career and having kids at all." For women in their 20s and 30s today, having kids is not only a more of a choice, what with birth control and the fact women aren't just seen as baby makers anymore — it's also a choice that affects your whole life. And women are very aware of that fact.

Not only that, but studies have also shown that women contribute more to housework and childcare than their male partners. In fact, this trend persists despite the fact that a majority of both men and women say they want an egalitarian relationship wherein both partners do the same amount of work. So if being stuck with all the responsibilities and being the one whose life gets the most affected is what's keeping women from being as enthusiastic about kids, then is there anything guys can do to change that? Things that might balance out the divide?

The answer, of course, is yes: Being more willing to take on the same responsibilities. Here are five things guys should be willing to do if they want to have a baby. They're all things that women have been doing for generations:

This might be shocking, but babies cannot be left home alone all day. Someone has to take care of them, and unless you can afford a nanny, that is probably going to have to be one of the parents until your child is old enough for day care. Women have been taking time off work to be with their kids forever. If prospective dads are really gung-ho about the kids thing, they should be willing to do the same. Oh, and employers? You matter here, too: Granting paternity leave will definitely help.

2. Spend Equal Time With The Baby

If you don't take off work — or after you go back — there are going to be days when you come home and you are tired and all you want to do is relax... except either your spouse has been home alone with the baby all day and needs a break, or your spouse has also been at work all day and is tired too. If you are not willing to put in equal time with the child, even when you're tired and cranky — even when the child is also tired and cranky — then this isn't an equal relationship.

See, we haven't even gotten to all the actual chores that go along with raising a kid. If you want to be a parent, that should mean signing up for half of the childcare duties as well — even the gross ones. Even the ones that are the same frustrating ordeal every damn day, like bedtime. You still have to be willing to do it.

Kids get things dirty. They draw on your walls, they track dirt on your floor, they knock over lamps, they build forts out of your couch cushions, and they put their sticky fingers everywhere. And those are just the basics. They mess up your whole house. If guys want to have kids, they ought to be willing to step up their household cleaning game accordingly.

Kids aren't just a handful when they're babies. They require constant attention, love, and scheduling. They need to be picked up from school every day — usually at a time when their parents are still at work. They have to go to soccer and band practice and art lessons and play dates. They get sick and need someone to stay with them. They need something to bring to the class bake sale. They need permission slips signed. They need a chaperone for the class trip. And that's not even taking into account the hard stuff like trying to raise them right and make sure they're happy. If guys want kids, they have to be willing to take on a equal share of all of that.

Basically, the moral of the story is that if you're a guy and you're not thinking about this when you picture raising a family, you're probably just assuming that most of this nitty-gritty stuff will fall on your spouse. You're probably not doing it on purpose, but that doesn't change the fact that it's happening anyway. If you want to be an equal parent, that means taking on 50 percent of all of this. Just, you know... something to bear in mind.

More like this
Black Women's Equal Pay Day Highlights An Upsetting Problem
By Brandi Neal
10 Ways To Be More Empathetic To Your Partner
By Raven Ishak and Lexi Inks
Think Your Partner Is Cheating? These Tarot Cards May Confirm Your Suspicions
By Kristine Fellizar
The 19 Best Tweets & Memes About Bisexual Awareness Week
By Lexi Inks
Get Even More From Bustle — Sign Up For The Newsletter