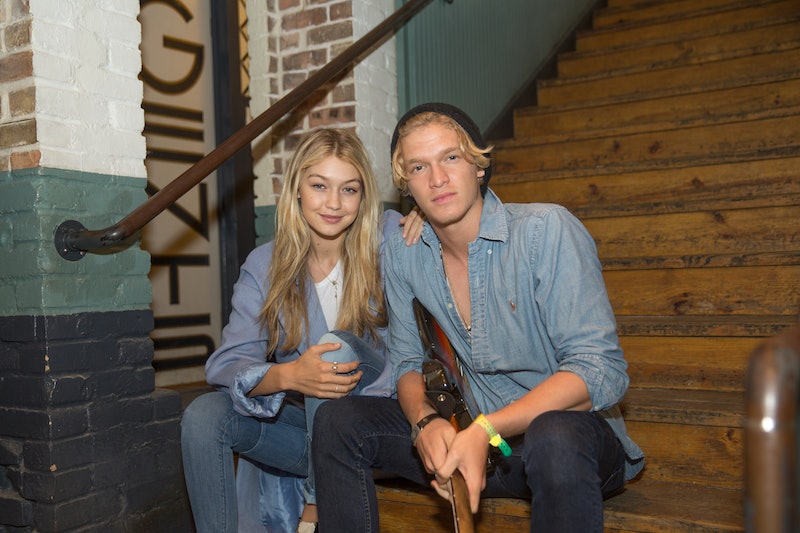 It's Gigi's world, and we're just livin' in it.

The 19-year-old supermodel Gigi Hadid posed with Cody Simpson for Mario Testino, and let me tell you: there wasn't much clothing happening. At all. The famed photographer shared a photo on Instagram earlier today, sharing a black and white image of the couple wrapped up in each other and in little else.

The handsome Australian casually wraps his arm around his girlfriend, while Gigi stuns with long legs and a towel wrapped around her head. She gives us her signature stare while her boyfriend sports an almost smile.

Gigi's and Simpson's nether regions are barely covered by a towel and are lined up in a pretty sexual manner. Had I posed with my boyfriend (now husband) at that age, in this way, my parents would have probably lost their shit. But, she's proved it before: Gigi Hadid is a grown woman and nothing can stop her now.

The beautiful couple often captures moments in their relationship through Instagram. It's hard to imagine two globetrotters such as these making a long-distance relationship work, but by the looks of things (on their social media account) they are doing just fine. Ah...to be young, mega-beautiful, and in love. Best of luck to these lovebirds!

More like this
Gigi Hadid’s Dad Shared What He Knows About Those Leonardo DiCaprio Rumors
By Brad Witter
Dixie D’Amelio & Noah Beck “Love Each Other” Despite Breakup Rumors
By Julia Emmanuele, Jordyn Tilchen and Grace Wehniainen
30 Clever Ways To Slide Into Your Crush's DMs
By Griffin Wynne, Carolyn Steber and Lexi Inks
Confusion Reigns After Kanye Changes His Instagram Profile Pic To Kris Jenner
By Jake Viswanath
Get Even More From Bustle — Sign Up For The Newsletter