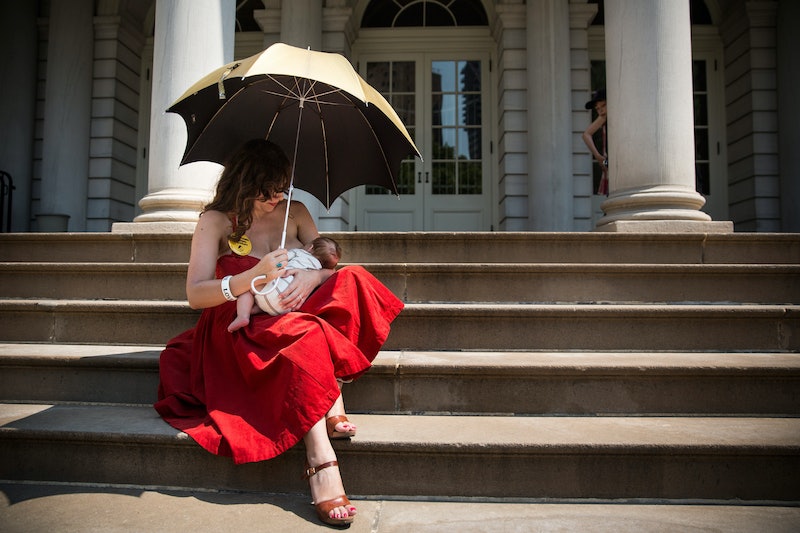 For some reason I can't quite wrap my head around, the ability for women to breastfeed their children in public has become a controversy lately — remember the time American Airlines told a breastfeeding mom to cover up, or when a woman was fired for breastfeeding and the Supreme Court ruled it was okay? Yeah, I'm angry too, but don't get too fired up just yet because at least Brazil is doing something right: The city of Sao Paulo will now fine businesses who shame breastfeeding moms. Can I get a hooray?

The legislation, which is expected to be passed by the São Paulo municipal government and go into effect within the next few weeks, will fine both private and public businesses around $150 if they refuse to let women breastfeed. Hey rest of the world, look over here, look at this awesome thing Brazil is doing, maybe take a hint?

This great new bill came about after a string of protests where groups of mothers gathered in public and nursed their babies, chanting, "Breastfeeding is my right." There were also a number of high-profile incidents of women getting shamed for publicly nursing their babies, which helped raise awareness. For instance, model Priscila Navarro Bueno was reprimanded by a security guard for breastfeeding at a museum. She pointed out the absurdity of the situation, saying, "Unfortunately society is still very puritanical. During Carnival, women can show their breasts, but it is not permitted to do so to give milk to your child. It is absurd that women have to breastfeed in a hidden room."

I thought about putting in an applause GIF because honestly, that comment is so spot-on that there's really nothing I can do but sit back and clap. It's so ridiculous to me that people take issue with women breastfeeding in public because breastfeeding is a natural part of life (unlike, for instance, flashing your boobs at Mardi Gras, which nobody ever seems to have a problem with). Like, your baby gets hungry, so you feed it — what's the big deal? Sure, I was alarmed when I saw a woman breastfeeding in public when I was a little kid because I didn't really understand. Then my mom explained it to me, and I was good. Are we as a society really not past the "LOL, look, a boob!" stage in maturity? I don't even know. I just don't get it; clearly I'm missing something.

Personally I think what Brazil did is a bandwagon more countries need to jump on (that means you, America). I don't really care if we fine businesses or not, but overall it would be cool if we stopped making such a big deal about breastfeeding and stood behind the women who choose to do it. I can pretty confidently say that this is one thing we just need to take a giant chill pill on, and let breastfeeding moms nurse their babies in peace.