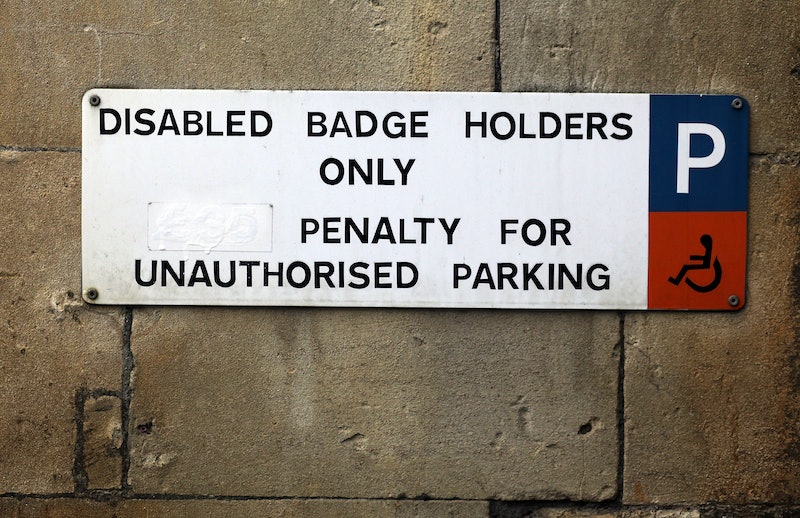 After losing her leg in an accident last year, 26-year-old Ashley Brady of Miamisburg, Ohio, was happy to finally have a handicapped parking space close to her apartment building. She had struggled through the winter, falling several times on the ice walking across the parking lot. But not long after she finally got the designated space, someone without a handicapped placard started parking in it. Frustrated, Brady wrote a note and stuck it on the other car's windshield, she told WKEF-TV in Dayton. "I was stern and confident in what I was saying and just letting her know she doesn't know what its like to walk around without your own leg," Brady told the TV station.

Soon after leaving word on the offending car, Brady got a note in response from the other car's owner, telling Brady to "shove it" and threatening to file a report if Brady touches her car again. It's pretty appalling, and puzzling too, because, I mean, has the nasty note-writer never heard of the Internet? Come on, honey, this is the kind of thing for which the term "going viral" was invented. You can't be mean *on paper* to a woman with a prosthetic leg who calls you out for parking in her spot and think it's not going to wind up on Facebook. (Spoiler: It did.) This person is bad at life and bad at the Internet.

That mean-spirited missive has been shared more than 3,500 times on Facebook since it was posted on Monday. Now, to be fair, we only have Brady's version of events here. We don't know exactly what she wrote in her note to the neighbor, and we don't have the neighbor's side of the story. Nonetheless, whatever was in Brady's note doesn't justify such a nasty response, and anyone who starts a note to a woman whose leg has been amputated with "Hey Handicap" is not really someone who inspires sympathy. The note-writer seems to be taking particular glee in the fact that she has two legs while Brady only has one, judging from the last sentence. And "honey, you ain't the only one with struggles"? What does that even mean?

Brady told the television station she got a lot of feedback from other amputees who had been in similar kinds of situations. (That I even had to type that as a true sentence makes me a little nauseous.) "She told me to cry to someone who cares, so I went to the Internet, and it turns out a lot of people care," Brady said.

Brady filed a grievance with the local police department. As of the time this post was written, the apartment complex where both women live has not decided what, if any, action it will take.