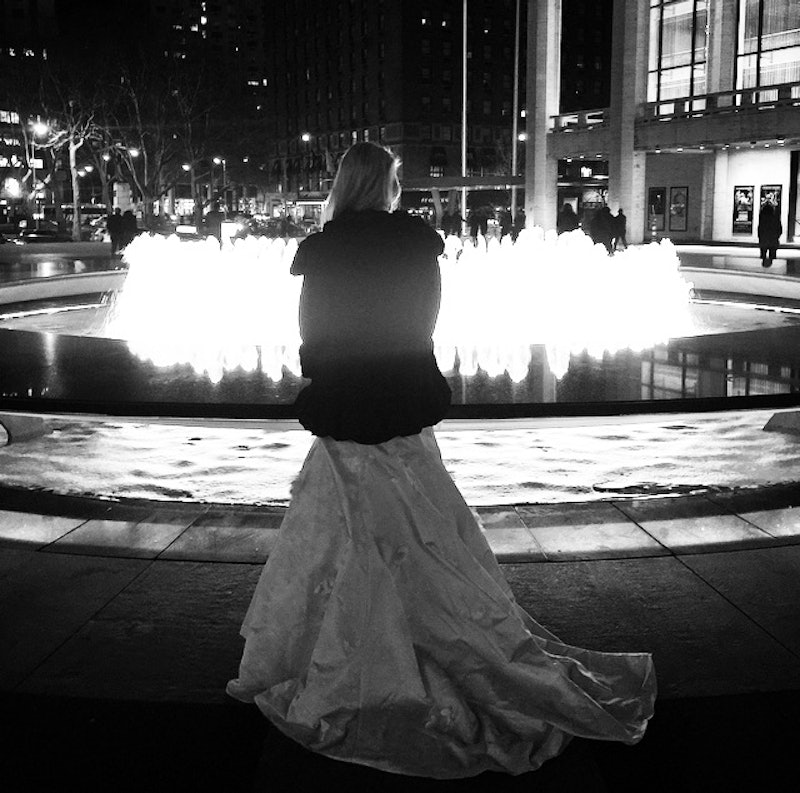 It was my first night at any opera, but not my first rodeo wearing my wedding dress. Recycling evening gowns is tricky since they're quite attached to memory and often rather extravagant, but we shouldn't be limited to Halloween if we want to go out and play Bride For A Day! So a still-single gal now, I planned to put on my ivory white again for an evening at the Lincoln Center to watch The Metropolitan Opera's Lucia di Mammermoor, complete with a pre-curtain call gathering for "Instagrammers, opera lovers and unhinged brides" who could also look the part of going mad over love.

But I missed it. Of course, I was running fashionably late and decided to keep my commitment to wearing the outfit. (I hadn’t tried on the dress since the last time it made an appearance.) After rushing home from an event, I tried zipping it up and it fit... quite snugly. Years later, my body had changed to fill the unaltered dress. I sucked it into the corset, zipped up and showed up with 15 minutes to spare. Unfortunately, my date Laine (a girlfriend of mine) was running behind, too, so I did feel a little bit of that left-at-the-altar kind of thing.

Slight self-consciousness started to creep into my mind as women quietly gaped as they walked by the ticket line. Interestingly enough, there were a few guys who seemed more catty and started whispering to their dates (clearly about my dress). But I let it all slide off into full awareness, beaming as a few older women came by and commented “beautiful dress, you look gorgeous.”

What I loved was having everyone's eyes eventually dance up my dress and meet my own as I greeted them with a giant smile and beaming eyes. They couldn’t help but sheepishly glance back, (maybe with a hint of embarrassment). The best thing was when they broke into a big smile, too, of course.

Well, Laine didn’t make it to the first act but during the first intermission we caught up and took some pictures on the patio. She was wearing a beautiful reception dress that she didn't get to use for her actual wedding. She also had on a fabulous, gifted pair of Valentino heels that she never wore. (Girl, those rosettes are meant to be seen.) I was glad this was an excuse to take these girls (the dresses, that is) out on the town: Why should we keep things hidden in our wardrobes, just because they're slightly impractical? People stared as we snapped selfies from the outside, and honestly, I felt like I was on display at a zoo whose spectators were New Yorkers trapped in the same semi-professional clothes on a Wednesday night. You would think in a city full of so much culture, they could be more blasé and respectful, maybe even admiring of clothes as cultural homage or something more personal.

As we watched Lucia di Lammemore, I reflected on period-wear. After the bustle came into fashion in the 19th century, women wrapped themselves in a full bodice with a corset and lady-like (?) lobster tails that created full-bodied curves. The ensemble makes one look as though you're standing more upright, with an umbrella as a cane, as beautifully documented in Sunday at the Park with George.

Still, I wondered how Lucia the prima donna was able to breathe and sing so sweetly and sadly under such material constrictions. As she and the flutist echoed each other, I thought about how for the opera singer it's her voice, for the flutist her percussion instrument, and for me my clothes — all forms of expressing and projecting our own music; our own melody. You don't have to follow someone else’s tune. If you want to reclaim the white dress, no one can tell you otherwise! Besides, a wedding dress is period clothing, too, since nuptials are a significant (albeit often short-lived) time in a woman’s life.

My mother, like many Koreans in the '80s, borrowed her ceremonial wear (modern and traditional). Some gowns nowadays cost anywhere from $200 to more than $10,000 for a gorgeous lace number from Oscar de la Renta (a girl can dream). A good few are kept through generations, others are resold. But frankly, either way it’s a lot of money for usually once-in-a-lifetime-wear. I'm not sure I want to trash the wedding dress or dye it another color because it's perfect as it is for now. Instead, I’ll keep mine as a reminder to feel like a fearless princess by putting it on every few years.

During the second, half-hour intermission, my friends and I hung out near the orchestral bar. People started to become a little bolder themselves, coming up to question the several women in white this night as we tried to explain each time that it was part of an event. (Sometimes, I admit I get a little frustrated about why we have to explain ourselves regarding whatever we're wearing or feeling.)

“I also think it’s kind of nice to dress up… for the opera,” I told a lady who held season tickets. She was wearing khaki boots and had her hair in a ponytail. But I then realized that I was judging. I'm not one to stop you from wearing sweatpants to Lincoln Center, if you're confident in them. Just own the night like a queen or the opera like a phantom, and people will shout "brava" from the orchestra pit; maybe they'll even ask for an encore.