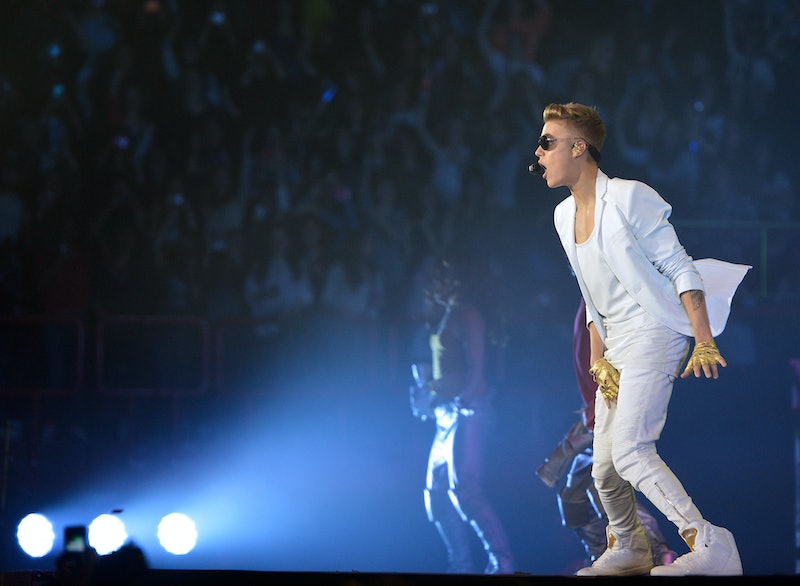 Justin Bieber continues to churn out an air of questionable judgement. Most recently, that materialized in the form of Bieber’s curious fedora and equally mysterious ensemble as he lorded over a Clippers game from his box seats at the Staples Center. The hat looked as out of place as he did perched atop the lap of model Ashley Moore.

The fedora — which appears to flaunt a match in its bow — is the neutral shade of beige favored by aging grandfathers for Sunday service. Bieber paired the accessory with a plaid not-all-the-way sleeveless top which appeared to be frayed, an oversize black T-shirt, some blue jeans, and tall khaki boots that served only half of their intended purpose. His recently blonde hair poked out of his headwear in tufts.Bieber is likely still trying to locate his pride following his Comedy Central roast, where everyone from Ludacris to Martha Stewart joined in on the opportunity to poke fun at the world’s most reviled Canadian. Bieber has become such a fixture of tabloid take-downs that Men’s Health recently posted a scathing character critique, saying, “This is a kid who had his bodyguards carry him up the Great Wall of China. Everything was handed to him. And now he’s a big boy and he thinks manhood is going to be handed to him too. And you’re like, no, dude. No.” Burn.

It appears his arrested development has contributed to something of a style identity crisis. And while Bieber has asserted his self-awareness in recent months, it's clear that doesn't extend to his wardrobe, which is just as confused and tone-deaf as ever.

More like this
Hailey Bieber Just Responded To *That* Viral Met Gala Moment
By Radhika Menon and Sam Ramsden
Bella Hadid's Flare Jeans Under A Dress Outfit Is So Nostalgic
By Allie Fasanella
7 ‘Ugly’ Trends Kendall Jenner Makes Look Cool
By Allie Fasanella
These Are Kylie Jenner's Best Paris Fashion Week Looks... So Far
By Dominique Norman
Get Even More From Bustle — Sign Up For The Newsletter