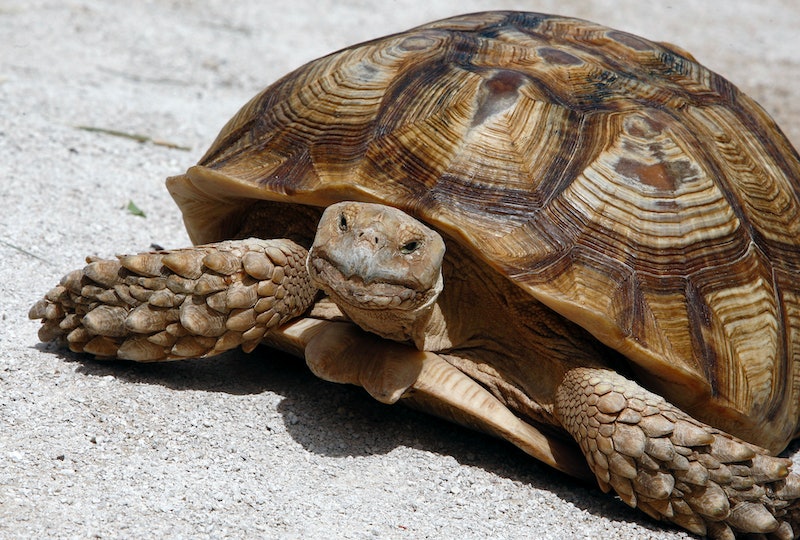 Giant tortoises are like the rest of us (stay with me here): For the most part, they want to be left alone, especially during those intimate moments with their special someone. So it's no surprise that two mating tortoises on the Seychelles were none too pleased when National Geographic reporter/explorer Paul Rose and producer Neil Gelinas happened upon their love nest and stopped to check out their bow chicka bow wow. Rose's retelling of the events in a post titled "Never, Ever Interrupt Mating Giant Tortoises" is actually pretty funny.

Walking across the island I was drawn toward a powerful rhythmic grunting coming from dense bushes and was delighted to find that it was two giant tortoises mating — a beautiful thing to witness. I did the obvious and — together with Neil Gelinas, our film producer — sat in the grass, quiet, almost holding my breath for fear of disturbing them.

Let's all stop to appreciate the phrase "powerful rhythmic grunting," shall we? The male tortoise, who weighs in the 600-pound range, heard the two guys creeping up on his hump haven, and when he saw where they were, he stopped what he was doing before completing the act, and started a slow-speed chase.

To Rose's surprise, the tortoise did not back down when he saw the two humans, and even though he was not exactly breaking land speed records, kept charging forward. It may have been the fastest that tortoise ever moved, and man, was he mad. "He got close, very close, close enough that his snorting and spitting plus the look in his enraged eyes above his snapping powerful beak made us retreat in a panic," Rose wrote.

My friends, let me assure you there is nothing funnier than a gif of a pissed off giant tortoise because it takes for-ev-er just to wheel its giant shell around.

The humans are all, "Ah, who cares, he's a tortoise!" but this guy was just interrupted in the middle of sexy time and he is NOT PLAYING. He keeps coming toward them, slowly, but the guys barely manage to scurry out of the way before that giant beak comes at them. Tortoises obviously cannot talk but there was definitely a lot of silent, implied "BRO, SERIOUSLY. BRO. UNCOOL," in this little guy's body language.

I know these guys are nature explorers — Rose's bio on NatGeo's website calls him an ardent explorer and vice president of the Royal Geographical Society, so he's more than legit — and absolutely no disrespect to National Geographic, which is a great organization, but, should they really be peeping on animals when they are doing the dance with no pants? (Actually, I guess all animals do the dance with no pants since they don't wear clothes but you get what I'm saying.)

This seems to me about as good an idea as driving through a wildlife reserve in Africa and leaving the car doors unlocked near a pride of lions. Let's review what happened there, shall we?

More like this
The 19 Best Tweets & Memes About Bisexual Awareness Week
By Lexi Inks
Why A Libra & Libra Couple Might Become Codependent
By Kristine Fellizar
These 4 Signs Are The Seductive Sirens Of The Zodiac
By Brittany Beringer
Breeding Kinks Have Been On The Rise Since Roe V. Wade Got Overturned
By Lexi Inks
Get Even More From Bustle — Sign Up For The Newsletter