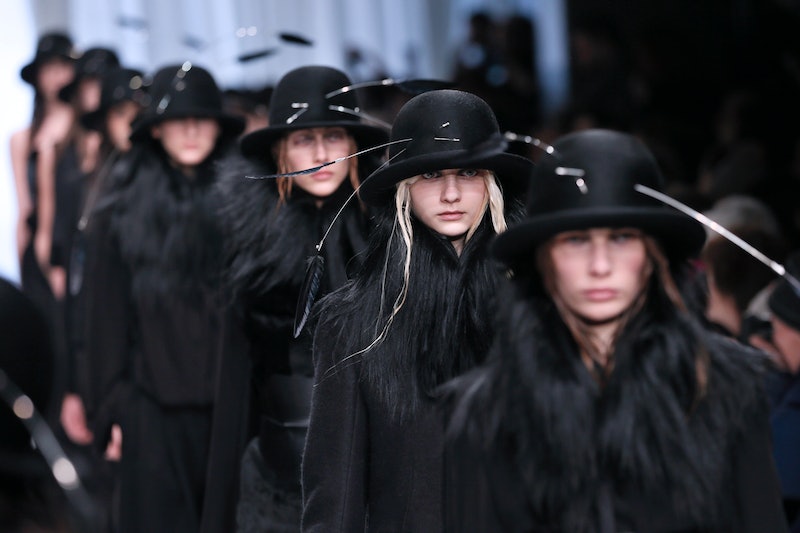 OOF! Well, that's pretty embarrassing. In its seasonal diversity report, the Fashion Spot found that found that 80 percent of models in the Fall 2015 shows were white. Even if fashion may seem like it's becoming a more diverse industry, this is undeniable evidence that they've got a long way to go.

The site examined the model bookings in New York, London, Paris, and Milan for their Fall 2015 fashion weeks to measure the split between white models and models of color. The site defined "models of color" as "those who appear to be nonwhite or of mixed backgrounds." Looking at the 9,538 models booked in 317 shows during all four Fashion Weeks, it found that four out of every five models was white. Comprising the percentage of models of color, 7.4 percent of the models were black, 7.4 percent were Asian, 2.9 percent were Latina, and 2.1 percent were described as "Other." Apparently, there was a three percent increase in the visibility of models of color from Spring 2015, when 83 percent of models booked were white.

Ever the melting pot, New York was found to be the most diverse our of the four Fashion Weeks. Out of the Big Apple runways, 24.4 percent of the models were women of color, but that percentage was dwarfed by the 75.6 percent that were white. Rather unsurprisingly, Milan brought up the rear in the diversity stats, reporting that 84.2 percent were white, and 15.8 percent were models of color. In most cases, the populations of color that were most represented were black, except for in London where Asian models came in second. Middle Eastern models were seen in Paris and New York, but were nowhere to be found in London or Milan. Paris showed no Latina models.

In terms of individual shows, Ashish, Peter Som, and Kenzo hired the most models of color. Disappointingly, TFS couldn't identify all the models in Kanye's Adidas fashion show, so couldn't include it. The fact that models of the super-diverse show were unidentifiable definitely says something significant about the face of the modeling industry. Ranking lowest in the diversity categories were Sharon Wauchob, Yang Li, and Ann Demeulemeester, all of which showed no models of color.

The shining moments of inclusivity on the Fall 2015 runways may have left us feeling optimistic about the state of fashion. But even if we'd like to think that the industry is becoming more broad-minded, these statistics show that this isn't exactly the case. The fact that 80 percent of this season's models were white is incontrovertible evidence that the industry still prioritizes white bodies over all else as the beauty standard. In order to be truly diverse, the industry needs to rectify this fundamental issue of blinding whiteness on the runways. Hopefully then it'll get to the point where diversity stops meaning tokenism and just becomes the norm.