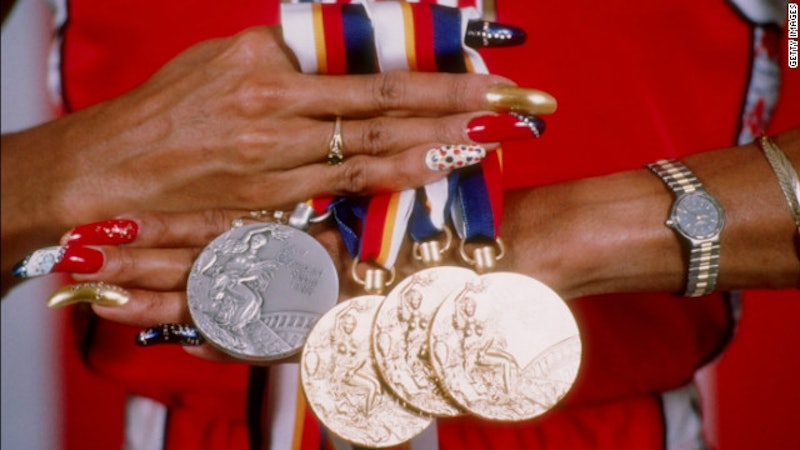 What better opportunity to deconstruct traditional fixtures of beauty as an extension of female identity than at the intersection of art and feminism? In a new exhibit coming to the Studio Museum in Harlem, called "Salon Style," artist Pamela Council does just that, exploring both social and cultural identities through sculpture work inspired by Olympic gold medalist Florence Joyner, more commonly referred to by her nickname, Flo-Jo.

Organized by Senior Curatorial Assistant Hallie Ringle, the exhibition describes itself as an examination of “artists that use hair and fingernails as subjects or media in order to explore the complexities of identity, and issues such as gender, politics and consumerism,” says the Studio Museum’s website. Council re-creates Flo-Jo’s manicure worn during the 1988 Summer Olympics in Seoul with an engrossing 1/100th scale 200m track fashioned out of gaudy acrylic fingernails (red, white, and blue, of course).

“[Ringle] and I did a studio visit in which I showed her some of my work, and she was very interested in my Blaxidermy nail series,” Council tells Bustle of her involvement in the group show. “Blaxidermy is a word I use that combines taxidermy and an idea of blaxploitation. In the series, I used beauty supply products and a lot of sculptural elements that referred to the body. Like blaxploitation, I hope it’s somewhere in the space between comical, outrageous, horrific, and enlightening. And always exuberant.”

"I’m one of these Sephora/product junkies," she says. "Blaxidermy started in part because I was hearing all these statistics about how much black women spend on beauty, and thinking about making $0.67 on the white man’s dollar at the same time. I feel like beautification and luxuriation are a trap, yet I know that at the same time I’m fully ensnared. It’s just too much fun. There’s an obsessive side to beauty and fashion that I love, but which also scares the shit out of me."

"I started painting the blackface nails for the Blaxidermy Sconces during a summer in Vietnam while working for Reebok in their sneaker factories. I was thinking about the Korean and Vietnamese-American salon industry and also heard Philip Martin reporting on the sex-trafficking in those nail salons."

Of her own relationship with beauty, Council adds, "Self-presentation is [a major component of] power. Sticking to your own eccentric style is hard, and I really admire those who can do it. What I love about Flo-Jo is that she was a winner. She worked so hard and practice, practice, practiced, and also had this mad exuberant sense of personal style that she brought to the world stage. I love the idea of not only setting a world record, which she still holds today (Fastest Woman on Earth), but doing it, literally, with flying colors. With panache."

Catch Council's work in "Salon Style" at the Studio Museum in Harlem March 26 through June 28, 2015.

More like this
Androgynous Formal Wear That Will Make You Feel *So* Fancy
By Megan Lasher
An Honest Review of MeUndies Boxers, According To A Non-Binary Person
By Megan Lasher
Prefer Alcohol-Free Perfumes? Water-Based Fragrances Are On The Rise
By Audrey Noble
How To Get Your Hands On The Pat McGrath X Supreme Nail Kit
By Justine Knight
Get Even More From Bustle — Sign Up For The Newsletter