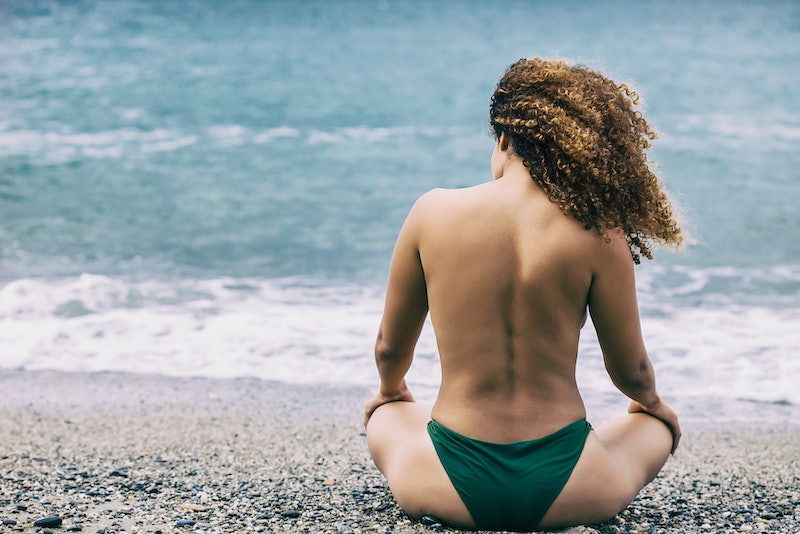 Boobs are complicated. Our intense relationship with our lady lumps likely began in junior high, when we either cursed our chest for being too big or Googled miracle creams with mammarius maximus extract to make our boobs grow faster. From the misgivings of puberty to running in slow motion on the beach to performing a breast self-exam to breastfeeding, our breasts live surprisingly full lives. But there’s one aspect of having boobs that is a constant source of controversy and debate: Should you go braless in public?

For many of us, putting on a bra every morning feels no different than brushing our teeth or moisturizing our legs. We don’t even think about it; it’s just part of our routine. We robotically reach into that disheveled underwear drawer and hope to pull back one regular bra instead of reeling in a tangled mess of straps and g-strings.

But even on our best days, it's hard to deny that wearing a bra sucks. We still fasten those stubborn hooks with a grim sigh of obligation, but it's nowhere near as comfortable as putting on a cute dress or a new pair of earrings. After all, don’t we look forward to that moment at the end of the day when we can shed our underwire and release the twins? And if we so look forward to the moment when we can unharness our bust, why do we do it in the first place? And why is not wearing a bra in public so polarizing, especially when I think we can all agree that they can be a hassle sometimes? To wear a bra or not to wear a bra may not be as fraught as Hamlet's famous soliloquy, but it's a pretty tough decision.

If some trendy reporter stopped me on the street and pressed me to explain why I choose to wear a bra just about every day, my answer would be woefully unsatisfying. “Because I should,” isn’t exactly the fervent bra endorsement you'd expect, but that’s where I’ve landed after all these years. My entire bra history — spanning a little over a decade — needs to be taken into consideration.

When I started wearing my first training bra in the sixth grade, it was a cool rite of passage. I actually wanted my little white straps and the outline of my modest brassiere to show through my shirt so everyone would know I had officially entered the "I’m Not A Girl, Not Yet A Woman" phase that Britney Spears sang about. In the years since, that initial tween bra mystique has worn off, and while I don’t resent wearing my over the shoulder boulder holder, I wouldn’t say I particularly enjoy it either. But I keep on wearing it, and I can’t imagine regularly foregoing wearing a bra in public.

To elaborate on my “Because I should” answer, I would probably add that modesty and comfort are what coax me into wearing a bra before making my debut outside the house every day. Sure, it’s also about “preventing sag,” “giving shape," “providing lift,” and any other bra-related lingo you’ve heard before, but the simple truth is that unless I’m in a baggy shirt that obscures my chest, I don’t feel confident being seen with my boobs unrestrained.

Maybe it's because breasts are overly sexualized and censored in our culture. Maybe it's because I'm worried onlookers will be able to discern that my right boob is bigger than the left. Maybe society has conditioned me to be chaste about my chest in this weird subliminal way, or maybe wearing bras keeps me at my own personal boob comfort level. Whatever the reason, I just can't imagine walking through the office with my breasts on the loose underneath my blouse. If nothing else, I appreciate having some reasonable assurance that I can avoid a nip slip and that one or both of my boobs won’t go flying out of my shirt somehow. I’m not alone in these insecurities, either.

Before I started this article, I chatted with a few of my girlfriends about their bra-wearing habits. I should mention that by this point in our friendship, we’ve been in each other’s company while bra-less (and farting) before, but I was curious when they thought it was “okay” to go out in public without a bra on. One of my friends explained, “The only time I go out without a bra are on days when I really am being a total slob.” Another elaborated, “I only do it if I’m staying in the car going through the drive-thru, and I have a hoodie on,” citing her larger breast size as the reason it’s unacceptable.

As I continued gathering info, I was surprised to find that four words kept popping up in discussions about not wearing a bra: getting away with it. As in, “If you have small boobs, it’s easier to get away with it.” Suddenly, it feels like we're plotting to rob a coffee shop (for the coffee) rather than deciding to hit up the grocery store sans brassiere.

Though our reasons may vary, our general discomfort about going braless reveals that we feel the decision requires a solid explanation — an excuse. Something legitimate we could whip out on the witness stand if need be. We have a tendency to assume that bralessness says something about us as a women that goes much deeper than, "Whoops, forgot to do laundry. Looks like the girls are on the loose today." It might seem like a simple matter of semantics, but this sure seems tantamount to latent boob shame. After all, when we do decide to face the potential consequences of freeboobing, we try to minimize the possibility than anyone around us will know the truth about what isn’t under our shirts.

There are plenty of legitimate reasons for wanting to wear a bra, but it seems that for many of us, the main reason we abstain from going braless isn’t because it’s uncomfortable, risqué or embarrassing: We just don't want to be the girl who goes out in public without her bra on. I’m not sure if that’s good or bad, but I do think it’s something we may have a hand in perpetuating boob shame — even beyond the myriad ways society and our culture redact our breasts.

I’m guilty on a few counts of girl-on-girl crimes, and one that I'm the most embarrassingly dismissive of is making rude comments or having less than charitable thoughts about other women's boobs, of all things. I've crossed paths with busty women in the city with nary a demi-cup to be found and have thought, “Your chest is too big to leave the house without a bra, sweetie,” with Regina George-esque finesse. I’ve even boob shamed women who were wearing bras, whispering things to my friends like, “She needs a better bra.” Maybe it stems from insecurities with my own boobs, or perhaps it's just a result of growing up in a culture that makes boobs into a big deal, but who died and make me leader of the boob brigade?

What I've realized is that maybe the bra/boob conversation is much bigger than we realize. Is it possible that the critical gaze from fellow women causes just as many feelings of unwelcome scrutiny as the gaze from men? Perhaps going braless extends beyond what makes us comfortable or what looks good and proves that sometimes we elevate our own personal preferences about what’s acceptable into principles to which we hold everyone accountable. Maybe the fear of being caught without our bra on is borne out of the same troubling mentality that makes us think women should fit into a specific size or wear a certain style of clothing.

Whatever our motives, we should never base our decisions on boob shame, and we should definitely stop dishing it out, too. I may not feel comfortable walking the streets without the support of my bra, but that doesn't a woman with breasts of any size, at any age with any number of kids isn't entitled to let 'em loose. The bra rules that govern our own lives might seem absolute to us, but like any other part of our bodies, we should always respect those who choose to express it in ways that might contradict our own. Can't we all just try to get along for the sake of the twins?