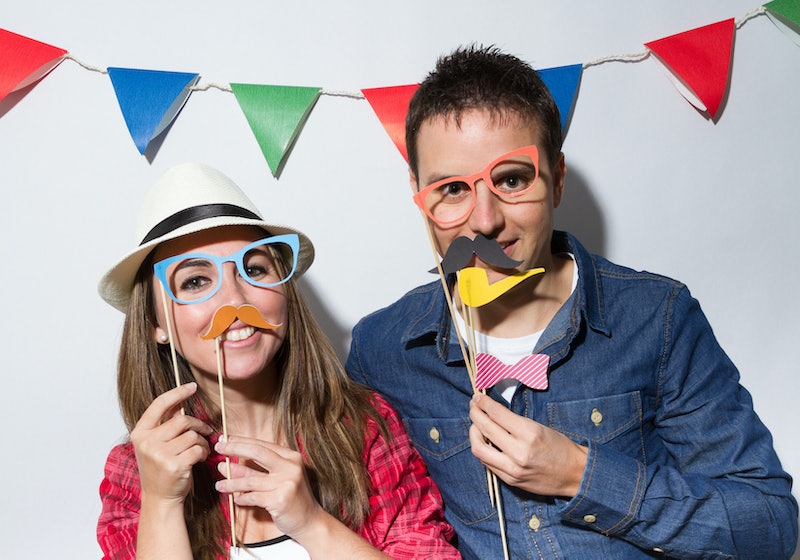 For pranksters and jokesters, April Fools' Day is like the Super Bowl for humor. It’s the day when contemporary jesters put their four-pointed, bell-tipped thinking caps on, and try to out-do their mischievous masterpiece from the year before. Whether you're looking for an April Fools' Day prank to play on your significant other, best friend, or coworker, today is the day to get a little silly.

I especially like to trick my parents on this day just to keep them on their toes, and to remind them of the little monster they made. I’ve grown a lot since using candy-corn bits to fake having my two front teeth knocked out though. Last year, for example, I told them I had bought a one-way ticket home for the summer with the real potential that I’d be living with them for, “oh, who knows how long?! Surprise!!”

It’s also the day to have some fun with your favorite person to pick on: your significant other, of course. Once, I told my now ex-boyfriend that I was being transferred out of state right after he had transferred back to the city I was living in to be with me. (Maybe that’s why he’s my ex now?)

Pretending you’re pregnant is overdone. Telling him that you got a neck tattoo with his name on it, or bought him two Chihuahuas from your neighbor who wants an open adoption with, duh, visitation rights is too amateur for you. No, no. This year, it’s got to be good. Here are eight April Fools' Day joke ideas for your significant other that will lift your comedic status to greatness.

1. "Throw out" something valuable

I'm sure your better half has a few treasures. Maybe he or she even has something of value that they've been wanting to sell for a pretty penny, like the older version of their DSLR camera. Have it go "missing" from its usual place so that your SO will notice, and casually mention you threw it away. Or, call up your love all excited and say that you sold it for them. Here's a few sample responses to really rub some salt in the wound:

"Omg, I must have thrown it out with the recycling on accident!" Or, "Guess what? I found a buyer at work for you! Here's $40."

So you swapped out your love's shampoo with Summer's Eve, huh? It may seem mean, but it's totally harmless. Plus, it will be great to hear your oblivious SO complain that their hair feels greasy and smells nothing like the Herbal Essences they've used in their morning routine for a decade.

3. Move the clocks an hour ahead

Set all the clocks in the house an hour ahead, and don't forget about re-setting the time settings on your significant other's phone. Sure, it will wake you up earlier too, but watching their confusion will make it worth it.

4. Give your lover's car the Post-It note treatment

Cover your someone special's car with sticky notes or plastic wrap. But, make sure you find a way to be there in order to capture his or her reaction on camera. You'll want to post that on YouTube.

5. "Tattoo" his or her name on your neck (or something similarly scary)

It's not just enough to get fake bear-claw tattoos on your boobs like Eve. In order to really freak out your SO on April Fools' Day, you'll want to make a DIY tattoo of their name (or your hypothetical child's name) that lines the side of your neck. Or, you could always convince him you got a tattoo wedding ring as a promise to him that you'll wait forever until he proposes. Yep, that'll do the trick!

6. Say you're thinking of joining an obscure group, and ask them to do it with you

Tell him you're thinking of converting to an obscure religion and need his support. Or, tell her you're dead serious about pursuing your passion of LARPing (live action role playing) — medieval style. The catch is, you've got to play the part to make it believable. Have a brochure ready for him or her to review in preparation for your first "meeting" with the group that night, for example. Or, get the outfit and accessories needed for the evening's knight battle or Quidditch match.

I've used this one before on that same ex-boyfriend I mentioned earlier. The trick to making this one successful is to try it later in the day after you've already pulled a prank so that your SO doesn't immediately dismiss this one as a joke.

Pick a weekend when you know his friends are coming in to visit, or when he has a concert or game he's been looking forward to, and tell him that you hope he's not mad, but you've promised your grandma you both would host her and her friends' girls trip since their original itinerary got screwed up.

"It's just for two nights, and they can sleep in your king-sized bed (while we're on the air mattress), but we will need to be home for dinner at 5 p.m. Oh! And I'll need your help administering medications and stuff."

8. Pretend to put a ring on it

Get down on one knee in a public area, preferably somewhere busy like Times Square where people are rushing by. (You don't want it to be in a restaurant or an enclosed venue where someone might actually call the entire room's attention to what you're doing, because then you'll just look awkward.) Take your little velvet box out, start your from-the-moment-we-met-I-knew speech, and watch the beads of sweat roll down his or her forehead. Warning: Do NOT try this if the two of you have seriously talked about marriage. The point of April Fools' Day is to have fun — not be a terrible person.

More like this
10 Ways To Be More Empathetic To Your Partner
By Raven Ishak and Lexi Inks
The 19 Best Tweets & Memes About Bisexual Awareness Week
By Lexi Inks
21 Signs You're Not In Love Anymore
By Sara Altschule, Kathleen Ferraro and Carolyn Steber
Are Quality Time & Gift-Receiving Love Languages Compatible?
By Lexi Inks
Get Even More From Bustle — Sign Up For The Newsletter