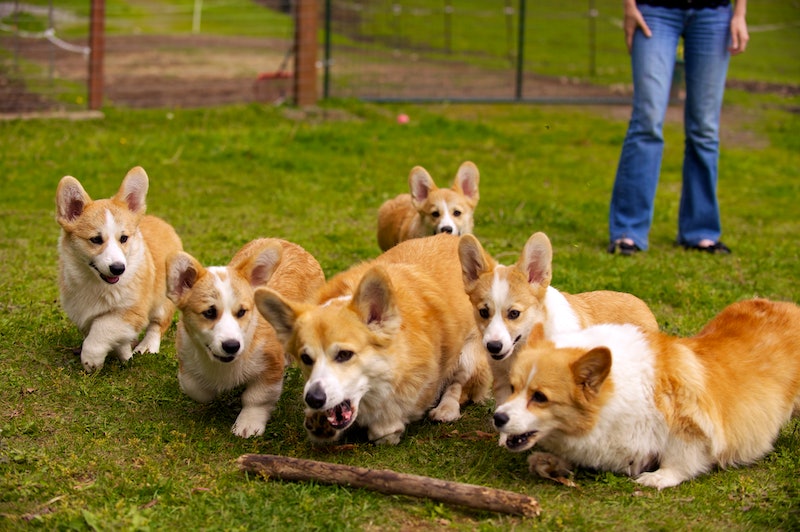 Full disclosure here: although they seem like very nice people and Kate Middleton has incredible hair, I couldn't care less about the royal couple, or their unborn baby, or their other baby who's about to get upstaged by his little brother or sister. That being said, I totally care about corgis, which is why I wholeheartedly support this ridiculously adorable video in which Prince William and Kate Middleton's new baby name is decided by a corgi race. It doesn't matter if you're a cat person, dog person, or naked mole rat person — if you don't crack a smile at the sight of a bunch of squat, fluffy dogs waddling around in royal garb, you just haven't watched it enough times. We have the geniuses at Ladbrokes to thank for uploading the footage from their Barkingham Palace Gold Cup. The race to determine the name and sex of the next Royal Baby is over in a flash, but let's be honest here. You're not watching for the actual race, you're watching for two uninterrupted minutes of corgis flopping around outside while their handlers try and get them to pay attention. I won't spoil who won, but let's just say I wouldn't place any bets on Boris.

It's just too cute for words.

I can't be the only one who sees the potential here, though. Why don't we make all important decisions this way? In fact, I have a few suggestions for where we can start...

I mean, it's not like people participate in elections anyway. Plus, we can blame the corgis if Republicans keep getting elected.

If you're the kind of person who has several ladies or gents in rotation at all times, you know it can be hard to pick one to settle down with. Just designate a few corgis with potential suitors' names, and let them decide for you!

Forget stuff like financial aid, student life, or proximity to establishments that serve alcohol. If you can't pick out where to go to school, leave it up to whether Harvard's corgi can waddle faster than Princeton's.

Figuring out what to do with your life is scary and difficult, especially when you're expected to choose at the ripe old age of "early twenties." You know what's easy? Labeling your neighbor's corgis with different job options and watching them go.

5. What to Eat for Dinner

I can't be the only adult who spends longer deciding what to eat for dinner than it takes to make it. Admittedly, that's probably because as a rule I don't make anything that takes longer than five minutes, but my point still stands.

I don't know about you, but I'll definitely be implementing the corgi race tactic in the near future... I guess. Maybe not. Oh, I can't decide.