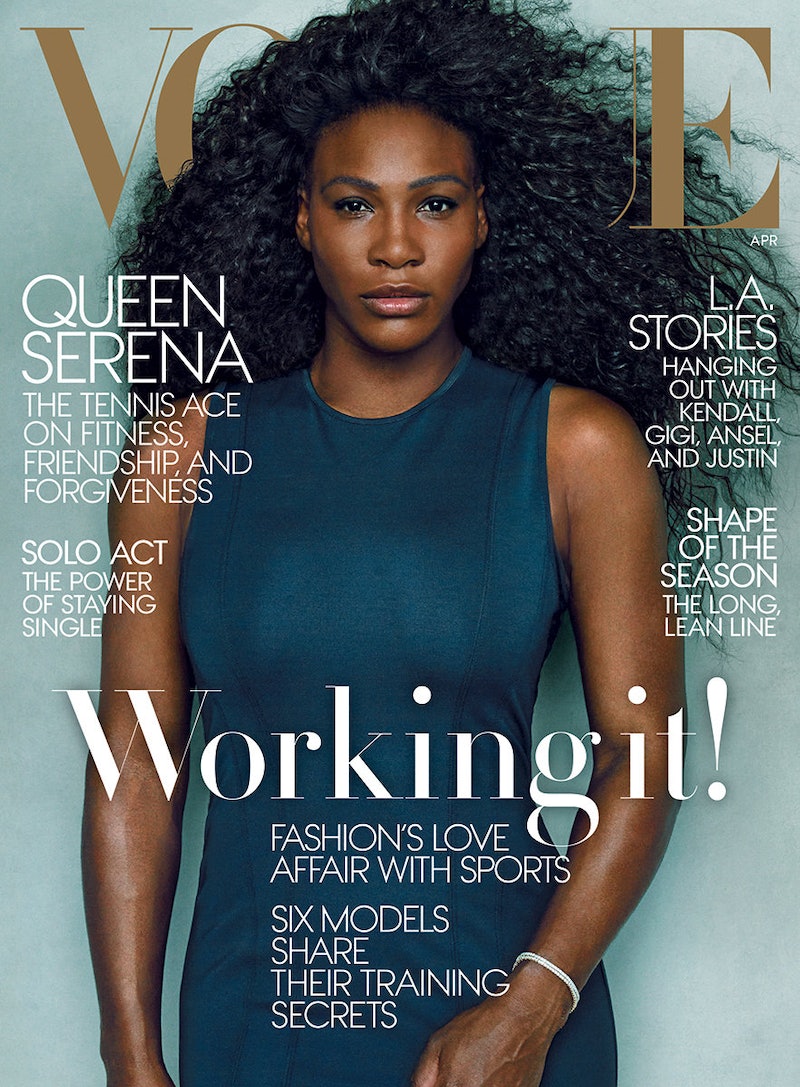 I could make a shameless sports pun about how amazing tennis goddess Serena Williams is on the April 2015 Vogue cover ("it's a Grand Slam!" is one I thought up), but instead, I'll just keep it simple and say that she looks majestic and stunning. Seriously, though, she's a portrait of fierceness.

On Saturday, Vogue released the full text of Williams' upcoming profile as well as a handful of the editorial images shot by Annie Liebovitz. In the Rebecca Jones-penned interview, 33-year-old Williams discusses her prodigious tennis career (she turned pro 20 years ago), the beauty of female friendships in sports, and some surprising body insecurities. Despite the fact that her toned biceps are likely the envy of millions, Williams admits that she used to hate her arms. Williams confesses that she wouldn't lift weights after her first Grand Slam, because she "wanted them to look soft." Basically, even athletes, whose bodies are as close to traditional images of "perfect health" as humanly possible, aren't above the damaging influence of cultural beauty standards.

Body hangups aside, the 19-time Grand Slam title holder looks strong and beautiful in all the images. In the cover photo, she wears an athletic-inspired Rag & Bone sheath dress that showcases her exquisite arms. Also, the beauty is nothing short of spectacular, with both her hair and her brows on full fleek, as the kids would say. In another image, Williams wears a crimson Donna Karan silk jersey gown, and looks a classical statue.

Caroline Wozniacki, Williams' best friend/tennis competitor, is featured alongside her in the spread.

Although the two are often pitted against each other on the court, they're also very close. In the text, the pair delves into their bond, and dispels a very cliche cultural myth. "Let’s just put an end to this myth that women players cannot be friends,” said Williams, “We can!"

It's no secret that Vogue typically showcases a certain kind of body — specifically, a waifish, nubile model body with the "soft" arms that Williams references. Hopefully, the magazine will come to showcase more women with muscle like Williams and Wozniacki as beauty icons. I would imagine that this would encourage more young girls to conflate strength with beauty.

More like this
Serena Williams Looked Like Royalty In A Bodycon Velvet Dress
By Allie Fasanella
These Are The Best Socks A Woman Can Buy
By Lisa Fogarty
The 2022 Emmys' Top Nail Trends
By Olivia Rose Ferreiro
How To Wear A Bucket Hat Like Rihanna, Dua Lipa, & More
By Allie Fasanella
Get Even More From Bustle — Sign Up For The Newsletter