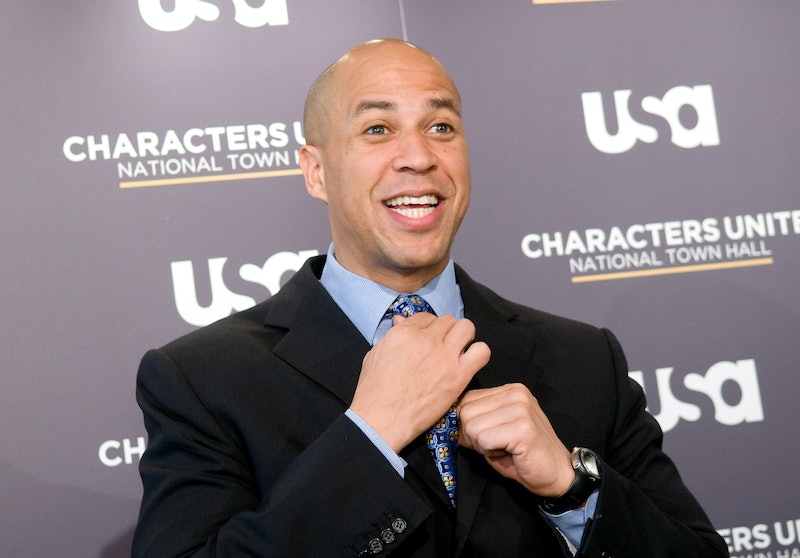 Newark Mayor Cory Booker coasted his way into the U.S. Senate Wednesday night, easily defeating Republican Steve Lonegan yesterday in his bid to fill the late Frank Lautenberg’s old seat. Booker won in part because he’s a Democrat in New Jersey; a state that hasn’t elected a Republican to the Senate since 1972. But that's not the only reason Booker won: people like him because he's a different sort of politician.

Booker is considered one of the Democratic Party’s fastest-rising stars, and some believe him to be a dark-horse candidate for Vice President in 2016. We did some thinking and concluded that Booker is, in fact, the perfect presidential candidate for Millennials (slash Generation Y, slash Boomerang Babies — we won’t wade into that debate right now). Here’s why.

Twitter is now basically mandatory for elected officials, but Booker’s Twitter savvy both predates and overshadows that of most of his peers. He lets his constituents DM him with any local issues they’re having, and is know for personally responding to them. This has been key during extreme weather events, such as Hurricane Sandy or 2010’s “snowpocalypse,” during which Booker would drive to people’s homes to deliver blankets or help them shovel snow after they’d pinged his account.

He’s also got a wicked sense of humor, as evidenced by this joke on Twitter, and the web videos he produced during his comedic faux-fued with Conan O’Brien back in 2009.

This was a perfect example of a politician connecting with young people in a way that was technologically savvy, genuinely funny, and relevant to public service. Booker is great at that. The role of social media only going to grow in future presidential elections, and Booker’s a guy who just has it down pat.

Not literally, of course. If Booker was literally a superhero, we wouldn’t know it, duh, because he’d be hiding his identity, since that’s what superheroes do. But he’s done a lot of stuff during his mayorship that definitely puts him into superhero territory. There was the time he stormed into a burning building and rescued the woman living there. Or the time he saved a freezing dog that had been tied up outside after a Twitter follower alerted him to its plight. Or when he helped stabilize a man who’d been hit by a car.

Also, he once let a bunch of Hurricane Sandy victims hang out at his house after their power went out. (That’s far enough from the realm of something a superhero would do that we’ll just call it “outstanding constituent services.”) While critics have accused him of caring too much about his public profile, the fact of the matter is that when it comes to his constituents, Booker gets it done. Granted, this is much harder as president than it is as mayor, but it’s evident that Booker cares deeply about his city’s residents and is willing to put in the blood, sweat, and tears to improve their lives.

While an undergrad at Stanford, Booker published an op-ed about the transformation he went from opposing gay rights to supporting them. Rumors that Booker himself is gay have been swirling around Newark for years now, partially because he’s single (which is still really quite rare for any elected official) but also, more crucially, because he’s never denied the rumors. Some would point to his refusal to answer as proof that he is indeed, gay, but to Booker, that’s not the point. After winning the Democratic Senate primary, this is what he had to say about his sexuality:

People who think I’m gay, some part of me thinks it’s wonderful. Because I want to challenge people on their homophobia. I love seeing on Twitter when someone says I’m gay, and I say, ‘So what does it matter if I am? So be it. I hope you are not voting for me because you are making the presumption that I’m straight.’”

For the many young people who care about LGBT folk being fully accepted into American society, you really couldn’t possibly hope for a better answer than that.

(For the record, Rachel Maddow claims that Booker isn’t gay)

In 1999, Booker went on a ten-day hunger strike. This was shortly after he was elected to the Newark City Council, and he found that none of his colleagues would move legislation to deal with the crime and housing problems in the city’s worst neighborhoods. To bring attention to the issue, he went on a hunger strike and — more impressively — set up a tent alongside drug dealers in one of the city’s most dangerous high-rise apartments. He lived there for two weeks, after which point the drug dealers left. Again, you can say a lot of things about Booker, but you can’t say he’s unwilling to suffer in the name of public service.

A common metric by which Americans gauge would-be presidents, at least according to political scientists, is: “Do they feel my pain?” Booker came from an upper-middle class family, so he was never forced to live in abject poverty, but he has taken rather significant steps to empathize with his poorer constituents. Last year, he partook in a challenge last year to live only off of food stamps for a week. That meant he had only $4 per day for food, and by the end of the week, he was publicly contemplating making a soup out of salsa, mustard, and mayonnaise to tide himself over.

He’d be the first vegetarian president!

Booker stopped eating meat twenty years ago, as he explained in a recent Reddit thread:

I was a competitive athlete back then and wanted to see what could take my body to the next level, also I was reading everything I could about food, where it came from, what impact it had both on me and my world. So in 1992, I decided to experiment, to try it for 3 to 6 months. And WOW! when I did my athletic performance took off, I felt so much better and it comported with other values and ideas I was exploring at the time, so I decided that this is what is best for me. It was a very personal decision.

He also experimented with veganism, but admitted that Ben & Jerry’s single-handedly ruled that out as a viable option (“There is something about those two guys I love so much, that I lean on, that I so badly just want to hug: Ben & Jerry – I couldn’t leave them”). So, despite being a tech-savvy superhero with an ambiguous sexual identity who lives in tents next to drug dealers, he’s also relatable. And would you just look at that face?!