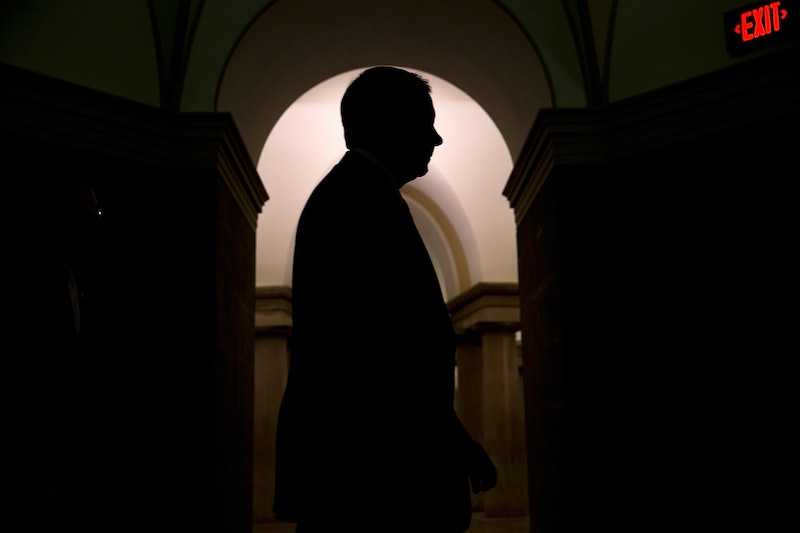 As everybody knows by now, the government shutdown is finally over. We'll be funded through Jan. 15, and the federal debt ceiling has been raised until Feb. 7. Hooray, it’s time to celebrate! Right? Wrong. Last night, as I watched President Obama issue his brief statement to the media, I found the ending very jarring. As Obama left the podium without taking any questions, CNN’s Brianna Keilar called out, “Mr. President, isn’t this going to happen all over again in a few months?”

According to the official White House transcript, the response was, “THE PRESIDENT: No. (Laughter.)”

Are you sure about that, Mr. President? I’m not laughing, because this shit-show isn’t over. The precarious situation that Congress has gotten the United States into is one that not even Joe Biden can smooth over with muffins.

At this point, I’m not sure how any U.S. citizen has any confidence at all in our Congress’ ability to make meaningful, efficient decisions. What we have is a vicious cycle: Congress bickers amongst themselves, waits until the very last minute to act, and the entire country shrugs a collective “meh.” Theses types of shenanigans are instilling a false sense of comfort in us that Congress will hold the hammer above our heads — but never actually slam it down. Kudos to Obama, though, for at least professing his faith in our representatives:

Once again, I want to thank the leadership for coming together and getting this done. Hopefully, next time, it won’t be in the 11th hour. One of the things that I said throughout this process is we’ve got to get out of the habit of governing by crisis. And my hope and expectation is everybody has learned that there is no reason why we can’t work on the issues at hand, why we can’t disagree between the parties while still being agreeable, and make sure that we’re not inflicting harm on the American people when we do have disagreements.

Well, good luck with that. Because come next January, he may be forced to eat his words as the government increasingly resembles some sort of alternate House of Cards universe, where power plays are more important than actually getting the job done.

As I heard about representatives from both parties congratulating each other on the deal and blathering about the “American people” for the umpteenth time, I couldn’t help but feel completely disgusted. No, even Obama didn’t save anyone. He just postponed our government’s utter disgrace for just a little while longer. Nobody won.

Even though Republicans arguably botched their own credibility and turned unfavorable opinion upon themselves rather than on the flawed rollout of the Affordable Care Act, this won’t be a turning point.

Even though it’s completely mind-boggling, some members of the GOP have vowed to keep fighting against Obamacare, even if it means putting the government at risk again.

Rep. John C. Fleming (R-S.C.) views it as a boxing match: “I’ll vote against it. But that will get us into Round 2. See, we’re going to start this all over again.”

And Congressman Tim Huelskamp of Kansas told MSNBC, “I don’t know how anything changes between now and when we hit the next debt ceiling. We are winning the war.” What war is that exactly, representative? To me, if you want to go to war, you join the military.

So exactly what kind of war can we expect around Jan. 15? Well, it doesn’t seem like anyone really knows yet. My advice? Brace yourself for more of the same, even though it’s completely unfair.

We are fairly certain of one thing, however: The GOP will try their darndest to use a "conscience clause" to wrangle with Obamacare's birth-control mandate in the coming months. So hold on to your ladyparts, because if extremist Republicans get their way — and if your employer objects for religious or moral reasons — women could be denied birth control, yearly doctor visits, and domestic-abuse counseling. In particular, Paul Ryan (R-Wis.), the House Budget Committee chairman, wants to use the clause as "leverage" to stagnate the Affordable Care Act's individual mandate.

The Washington Post’s Jonathan Bernstein doesn’t think that another shutdown will occur. Yet, as he points out: “The dynamic this time was that a relatively small group wanted [a shutdown], and a much larger ’fraidy cat group was terrified of allowing any visible difference between themselves and the radicals. That could repeat itself next time — and the radicals, especially those in outside groups, may actually be pleased with the fundraising results of this fight, even if it hurt the party overall.”

We shouldn’t be celebrating right now. We shouldn’t even be relieved. We should be pissed off. And utterly disappointed, like White House press secretary/part-time sad puppy Jay Carney says: