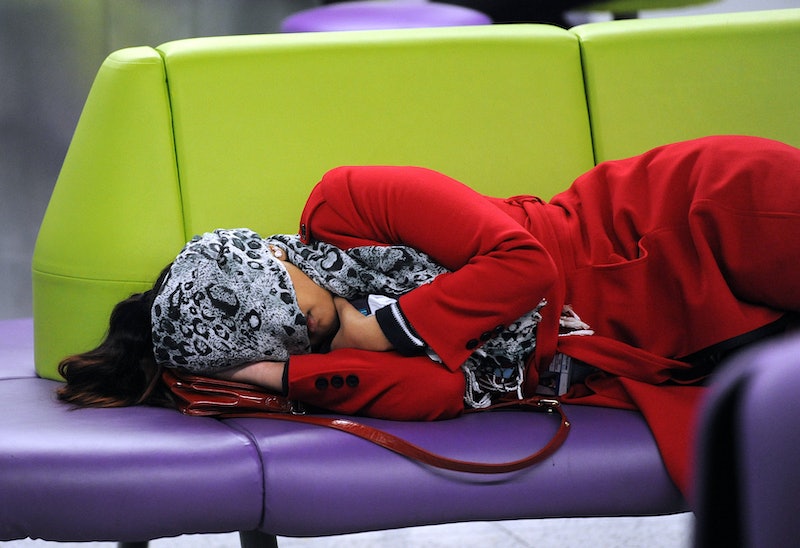 If there's one thing that's right up there with terrible plane food as one of the most annoying parts of international air travel, it's jet lag. The phenomenon has been a term since at least 1966, where a travel magazine referred to it as "a debility not un-akin to a hangover," but we're no closer to getting rid of it. The symptoms of jet lag — exhaustion, headache, and a complete inability to sleep at the appropriate time at your new destination — are pretty easily explained by the fact that our internal "body clocks" didn't evolve to rocket around the world. The cure (aside from taking sleeping pills on a red eye) has proved elusive — and there's a scientific race to find it.

Whoever cracks the code can be promised massive windfalls from travelers tired of losing two days of holiday to bleary-eyed exhaustion. The good news? All us jet-setters can use the many different scientific solutions to ease our own experience. It looks like the next few years are going to be exciting ones for serious pharmaceutical jet lag cures — but, even without the FDA approval, we can still nab some ideas from clinical trials and papers to help us cheat our way to perfect body-synching.

So here are six of the most promising scientific jet-lag cures, and how you can use them to get to the beach pronto. The best advice? Don't just rely on one: use a combination, and you're much more likely to wake up with the overseas sunrise.

Jetlag's basic problem is the disruption of your circadian rhythms: they're the organic rhythms in your body over the course of the day that dictate when you're tired and when you're awake. All organisms have them and they can change slowly, but a plane flight is simply too fast for your rhythms to adapt. (Hence stumbling around bumping into things.)

Mobile technology is one of the new frontiers to keep track of your circadian rhythms and how they're going to be changed by your trip. The University of Michigan has developed a free app called Entrain based on the well-known fact that exposure to daylight is one of the fastest ways to "trip" your circadian system.

Put in your usual sleep schedule, your destination, and what kind of things you're going to be doing there (i.e., whether you're going to see a lot of light or not), and Entrain will tell you when you need to sleep and wake up. It claims to help you sync within four days of a 12-hour time difference shift. Pretty amazing.

2. Change When You Eat

Another frontier in the fight against jet lag? Food. The University of Japan found that insulin levels in the blood actually have a big role in your circadian rhythms — and that when you eat can seriously affect your sleep schedule.

The basic rule? Eating sets your body's schedule as well as light. If you're traveling somewhere which is six hours earlier, start eating when you would in that time zone before you go, to help your body's insulin rhythms adjust.

If you travel regularly, you'll have heard about the supposed wonders of the hormone melatonin as a cure for jet lag. Is the fuss really justified? Well, in some cases, yes.

Melatonin is a hormone released in the body in anticipation of sleepy-times; its rise in the body makes you less alert and more snoozy. A now-famous study in 2002 looked at small doses of melatonin for long-haul travelers crossing five or more time zones, and found that 0.5 to 5 milligrams of the hormone made people fall asleep at the "correct times" in their new places — and so helped them reset their body clock fast.

But it ain't all good news. If you have epilepsy or are on anti-coagulant drugs, melatonin is definitely not a good idea. You also can't drink alcohol while taking it, and we don't have any studies yet about its use over time. Also, while it's marketed legally over the counter in the U.S., it's not legal or requires a prescription in some other countries, so you need to be prepped if you're taking it overseas.

If you can stand it, setting up a camera to flash every so often during the night before you leave may just help you reset.

Stanford scientists tested this by flashing millisecond-long flashes on sleeping volunteers during the night, and found it helped them significantly reset body clocks — without disrupting their sleep. Said brains were exposed to flashes of light and then observed, and the results were pretty remarkable.

The flashes of light, the scientists in charge said, effectively "reset" the brains' circadian rhythms. One flash made each brain shift forward two hours, basically bringing itself from waking up at 8 a.m. to 6 a.m., and then settled there.

In 2013, Japanese researchers found what they claim to be the body's "master clock" in the brain — and also claimed that fiddling with it in mice meant a complete body reset to a new rhythm in just one day.

The actual neurological science is a little tricky: essentially, around 10,000 cells in the brain "talk" to one another about the time. Preventing that communication — suppressing the cells' vasopressin receptors, to be technical — confuses the master clock and lets it be reset very easily.

Unfortunately vassopressin suppressors for humans don't exist on the market yet — so this one's still a dream, at least for now.

A bunch of scientists at McGill University in Toronto think they've pinned down the next big experimental drug to destroy jet lag — and this one relies on steroids.

It doesn't work on confusing the brain or the stomach; it goes for blood cells. As you're guessing, keeping time in the body is a complex thing, and a lot of different parts have to interact — one of which is our white blood cells. The scientists used glucocorticoids, a kind of hormonal steroid, to disrupt the internal clocks of the white blood cells, and hey presto: reset body clocks.

Glucocorticoids are already on the market for anti-inflammation — but they're used with caution and have massive side effects, so please don't go out and merrily try to track some down for your next trip.

Wait until they do more tests, guys.

More like this
You Can Stay At The 'Hocus Pocus' House On Airbnb
By Alexis Morillo
Craving The Beach? Here's Your Guide To A Solo Vacation In Turks & Caicos
By Alexis Morillo
20 Smart Devices Under $35 That’ll Change The Entire Vibe Of Your Home
By Emma Carey
Why TikTok Is Flooded With Controversial Videos About "Pick Me Girls"
By Courtney Young
Get Even More From Bustle — Sign Up For The Newsletter