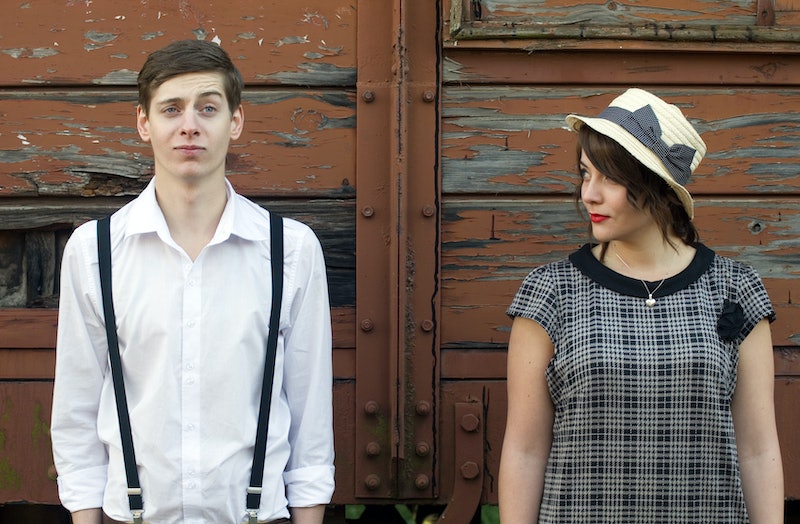 I am on a mission. For those of you who haven't stumbled upon my investigation into what men really think of women's bodies, I have a fascination (read: borderline obsession) with the romantic and/or sexual relationships between men and women. And I have a particular interest in how men look at women as opposed to how women view themselves. My belief is that the issue of the male gaze is more complicated than it seems, and my personal investigation through the medium of lingerie, and more recently, writing, explores this notion. I am a self-described feminist — I take the standpoint that men and women should be equal in the eyes of society and in personal interactions. However, I acknowledge that — although performance of gender is partly socially constructed, and gender in its biological sense can be fluid and is, perhaps, more of a spectrum than a binary idea — men and women have seemingly intrinsic differences. I believe these differences should be taken into account, but should never be used to justify inequality.

My thoughts on the male gaze specifically — in a nutshell — are that the male view of the female body and/or experience as an outsider looking in will be more objective by default. A man can never fully grasp the inner workings of the female experience, no matter how many women he is friends with or how many books he reads. Just as one will never be able to fully experience the world through the eyes of one's mother, best friend or boss. You can only speculate, listen and engage your empathy. A man's gaze upon a woman, no matter how friendly, will always be that of an outsider.

When we speak of the male gaze, what we usually mean is a patriarchal gaze — one that has caused an unknown list of issues for women, and men too. It reduces a woman's worth to her looks, and those looks need to fit a narrow parameter to be validated. This, in turn, reduces the representations of female sexuality in the mainstream. It also teaches men to worship, and expect, a very narrow type of female sexuality in the real world. Basically, it's bad for both of us.My issue is when people critique this dangerous black and white gaze with an equally simplified gaze. Men have varied and complex desires, just like women. Not all men succumb to this prescribed way of viewing women. And even if they do, it doesn't mean that's how they see women, period. Also, the act of men looking at women, admiring their bodies as different to their own, and finding them beautiful and/or sexual, isn't fundamentally a bad thing. It is a biological response. And come on, ladies do it to men too!

So: The simple fact that heterosexual men often like to look at women isn't bad. Rather, it is the way a narrow representation of this admired beauty is put on a pedestal and prescribed to men as the "ultimate babe." It is the fact that men are taught that it is okay to comment on a woman's body, when their opinion is not asked for. It is that a large percentage of men still think it is acceptable behavior to comment on women's bodies because of their entitlement, however conscious they are of it, that is problematic.

This is why, when presented with a mission that delves into these very notions, I was eager to accept:

My mission was to gather doodles of women by their partners. Through these clumsy artistic attempts, I was to investigate how men really envisage their objects of affection. I was also to ask these same women to draw themselves, to see how the results compared.

I spoke to five couples for this experiment. The couples range dramatically in age and length of their relationship. Some were young teens, while others were adults from their twenties to forties. Some couples were married or in long term, committed partnerships, and others in the initial stages of romance.

I'd also like to add that I don't fancy myself as a qualified psychologist! However, my degree did require me to be able to accurately read and interpret images! Also I would like to think of myself as a pretty analytical thinker, but I will let you, lovely reader, be the judge:

After pondering on the best way of showcasing the similarities and differences between the male and female scribbles, I decided to display each couple's attempt next to the other. The man's drawing of his girlfriend is shown first, followed by his partner's self portrait. Bear in mind, not all the participants are of an artistic background:

Daisy as drawn by herself.

Imogen as drawn by herself.

Becky as drawn by herself.

Ragini as drawn by herself.

Natasha as drawn by herself.

Now, whilst not every doodle above is exactly a Da Vinci, there is a lot of interesting visual information conveyed within them, regarding how these five Romeos picture their corresponding Juliets. Especially in relation to their sweethearts' own self visualizations. As I suspected, the women's self portraits depict themselves in a more intimate and internal manner, which contrasts to the portraits by their partners which feel more objective or glamourizing. This difference, however, is not as obvious as I predicted.

The first thing that struck me about the differences in the representations of each woman was the lack of color used in the female self portraits. Although only two men used color in their doodles, none of the female participants did. To me, this makes the male drawings more visually gregarious in nature. Their corresponding female self portraits feel more reflective.

The choice of Owen of Couple 4 and Jim of Couple 5 to represent their partner's outfit choice in color tells us that they notice their partner's self expression through apparel. In order to include this in their images, they must see this outwardly expressive side to their partner as something important to note. As outsiders looking in, it makes perfect sense that the men would do this. Owen of Couple 4 carefully pens his partner Ragini's hair adornments in gold and records the contrast of her sweet white Peter Pan collar agains her royal blue top. Likewise, Jim of Couple 5 lovingly crafts his partner, Natasha's boat necked tee made from soft, black fabric with his tablet. In contrast, their partners both softly describe themselves in sketchy lines only. They do not focus on their outward appearance, despite both women actually being heavily into clothing and the way it can be used to express themselves, in their everyday lives. (Ragini is a style blogger and Natasha co-owns and designs for her fashion company.)

In fact, Imogen of Couple 2 and Natasha of Couple 3 have both chosen to just portray their faces, which feels similarly internal in contrast to their partners' more somatic depictions. Imogen gives a nod to her fashion choices as a form of self expression — briefly describing the texture of her cardigan with her biro and choosing to picture herself wearing a '90s-inspired choker; but in no way does she use the amount of detail that her partner Alfie does. Despite his jokey, comic, cartoon style, Alfie has painstakingly scribbled in Imogen's legs black to give the impression of opaque tights. He focuses on the graphic on her t-shirt and even accessorizes her outfit with a scarf. Even more extreme than Imogen's, Natasha's self portrait is very illusory — barely describing the outlines of her face, ignoring her hairstyle entirely. There is nothing that gives away her outward style. Instead, Natasha draws a dreaming woman, an essence, something mutable.

The women's drawings also illustrate their bodies in slight, but remarked differences compared to their observers. Both Jamie of Couple 1 and John of Couple 3 are sure to include their muses' breasts, whereas their partners Daisy and Becky leave them out of their drawings completely. Alfie of Couple 2 also corrects the original boyish shape of his drawing, by adding his partner's round hips to his doodle. His partner Imogen leaves out everything from her shoulders down. This cheeky reference to the feminine body parts the men so admire physically on their girlfriends contrasts to their girlfriends' more neutral depictions of their own bodies. The men draw the parts of their partners' bodies they love so as to celebrate them.

It is quite upsetting to note the deliberate inclusion of the female participants' perceived bodily flaws, and the omission of the parts the women feel are not perfect enough to include. I asked the participants to describe what they were drawing, either verbally (if we did the experiment in person) or in writing (if they sent their submissions externally). Ragini of Couple 4 was sure to include her uneven breasts in her drawing, whereas her partner overlooked them in his. Although Ragini told me in her email submission that she included this because she had become comfortable with her breasts as part of her unique body, the very fact she notes them in her drawing is quite telling. Yes, she has incorporated them into the positive visual narrative of herself, which is amazing, but the inclusion of them could be read almost as an apology. Though I guess that is open to interpretation.

Daisy of Couple 1, Imogen of Couple 2, and Becky of Couple 3 both do not depict their feminine bodies at all. Imogen makes no reference to her boobs despite drawing her chest, and Becky similarly leaves out any mention of her breasts. In conversation, both women express their slight paranoia about their breasts' diminutive size. Daisy summarizes her drawing using negative adjectives mentioning her perceived "big, untamable hair" and "short legs," pointing out her self-pronounced "flaws."

Although the distinctions between the men's drawings of their girlfriends and their partners' self portraits may be subtle at first glance, the differences in representation of the subject by her observer and herself are apparent.

Thankfully, though none of my female participants conveyed a terribly negative self image, there were discrepancies. As each couple took part in the experiment, I noticed the way the men recognized positive physical attributes in their partners, whereas the women couldn't help but apologize for their "flaws." Flaws that were not picked up on by their loving SOs. As I expected, the female portraits were far less focused on their outward appearance. Instead, their drawings took on a vagueness that suggested an insider looking out. These drawings point out the void between how we perceive ourselves internally and how we are viewed externally by others, even if in a lighthearted way. Perhaps we women should focus less on features we perceive as flaws, as it seems our observers might not see them in the same spotlight we do....

More like this
Kim Kardashian Reveals Her Response To Kanye’s Fashion Opinions
By Jake Viswanath
How To Politely Reject Someone Who Keeps Asking You Out
By Laken Howard and Lexi Inks
Help! I'm Not Getting Any Attention On Dating Apps. What Can I Do?
By Sophia Benoit
20 Ombré Box Braids To Get You Out Of A Hair Rut
By Natasha Marsh
Get Even More From Bustle — Sign Up For The Newsletter