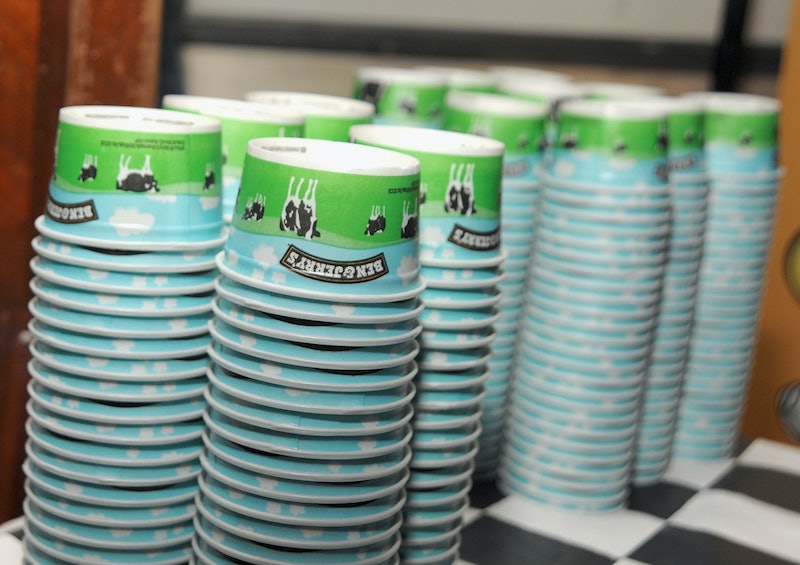 Passover starts in just about a week and a half, so if you observe the holiday, you're probably already starting to stock your kitchen with kosher-for-Passover essentials. I have good news for those of you in that proverbial boat, too: This year, that might include ice cream — because Ben and Jerry's Charoset-flavored ice cream is a thing, and yes, it's kosher for Passover. The one downside? You can only get it in Israel. Apologies if I just got your hopes up only to dash them due to the location in which you currently live — but hey, at least this stuff actually exists, right? That's delightful enough in and of itself!

One of the foods that appears on the Passover Seder Plate, charoset (alternatively haroset and charoses) is a sweet paste made of fruit and nuts; there are a couple of different types, but the one the Ben and Jerry's flavor seems to be based on is the Ashekanzi or Eastern European version made from apples, walnuts, cinnamon, and some sort of sweetener like honey. The Jewish Standard caught sight of it the other day, and it's spread like wildfire on social media since then. For the curious, it looks like this:

Reactions seem to be somewhat mixed; some of the commenters on The Jewish Standard's Facebook page think it's the greatest idea ever, as demonstrated by the use of this memorable Futurama meme:

While others are… shall we say, slightly less thrilled. “Oh dear… well, at least it's not Maror flavor. So there's that,” wrote one commenter, referencing the “bitter herbs” — usually romaine lettuce and/or horseradish — traditionally consumed alongside charoset. All things considered, though, there are probably worse Passover-themed flavors Ben and Jerry's could have dreamed up, soooooo… yeah. Do with that what you will.

Interestingly, though, this isn't the first time Charoset-flavored Ben and Jerry's has appeared on shelves in Israel: The Vermont-based ice cream company first made waves for their kosher for Passover flavors back in 2012. When the Charoset flavor first debuted, Times of Israel writer Elli Fischer described it as “vanilla-based with apples and cinnamon, and lots of walnuts.” He added that, while it's “definitely premium ice cream and quite tasty,” it's also “not very [c]haroset-y.” Admittedly it sounds a little more like a seasonal fall flavor from that description, but hey, at least it tastes good. According to the Israeli Ben and Jerry's website, other kosher for Passover Ben and Jerry's flavors include chocolate, chocolate with walnuts, banana with walnuts, vanilla, coffee, and Dolce de Leche.

Don't live in Israel? You can still experience either the joys of horrors (depending on your point of view) of charoset ice cream by dolloping some of the leftovers from your Passover seder on top of a bowl of vanilla ice cream. Best situationally-appropriate sundae ever? I think so.

More like this
10 Pumpkin Recipes That Are Way More Creative Than Pie & Lattes
By Rebecca Deczynski and Alexis Morillo
TikTok's Butter Board Might Be The New Cheese Plate
By Emma Carey
On TikTok, Tinned Fish Date Night Is The Latest Viral Food Obsession
By Emma Carey
Deliveroo Is Selling Lotus Biscoff Cinnabons Now
By Darshita Goyal
Get Even More From Bustle — Sign Up For The Newsletter