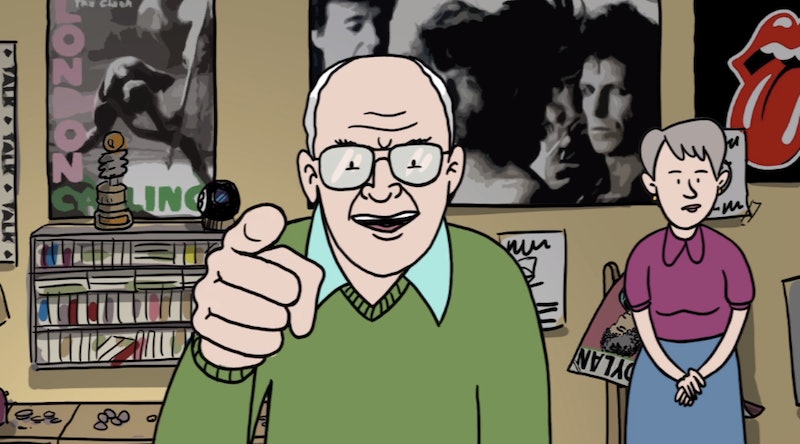 Imagine if you had've recorded every argument you had with your parents growing up. You'd look back and cringe right? I know I would. Being a teenage know-it-all is kind of embarrassing in retrospect. Mike Cohen is not only looking back, he animated an argument he had with his parents in 1985, with the help of artist Rodd Perry. As the video begins, Mike, a big fan of rock music, says he grew up in Buffalo, New York in a "Republican, conservative, Jewish home", and refers to his dad as a "grumpy old Jew". Mike secretly taped many of the arguments he had with his parents between the ages of 12 and 28, which has got to be both vindicating for the times when he can look back and relive his parents being unreasonable and overbearing, and downright un-dignifying when it comes to listening to the kinds of bratty arguments he made when he was a kid.

The argument will stir up some nostalgia in you for sure, thinking about the way you used to bicker with your parents. Both sides are stubbornly adhering to their stance, and neither is doing a very good job of actually hearing the other. Sound familiar? There's the parental panic of wanting their child to be clean, to be better, and to succeed, and then there's the defiant child, unable to see that while parents are sometimes crazy and unreasonable, they have the best intentions, which is what they perceive to be their child's best interests, at heart.

Watch the incredible creation below, and see if you can't seem any similarities between his argument and ones you had with your parents when you were growing up:

We've all fought with our parents as unruly teens at some point, and Mike's recorded conversation captures the essence of what it's like to feud with your curmudgeonly elders. Here are some of the ways in which waring with parents as a teenager makes you feel:

Like they just needs to relax because you've got this