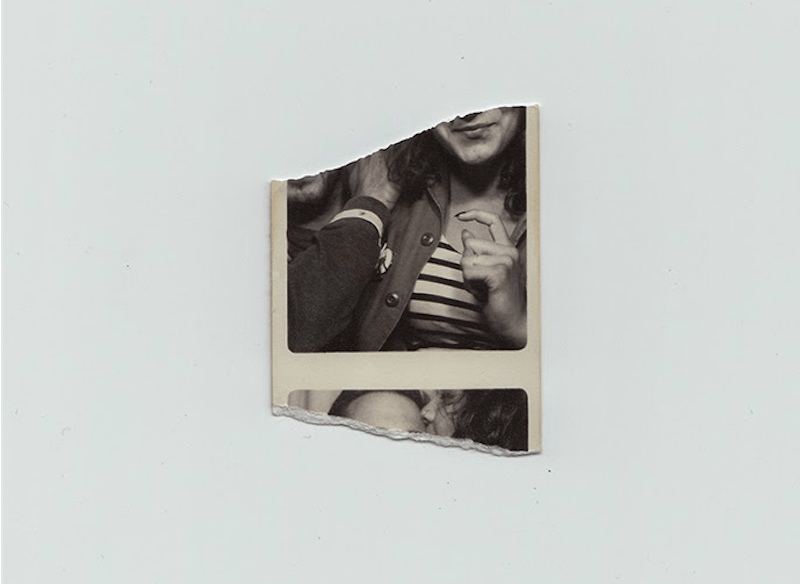 We all have a box somewhere — physical, digital, or even mental — full of memories: Pictures, objects, souvenirs, photographs, and more. But what do we do when the things within those boxes become too hard to keep? Do we destroy these memories that have grown so painful over time? Do we keep them anyway, potentially allowing them to destroy us instead? Or do we do… something else with them? Chicago-based photographer Jason Lazarus' “Too Hard to Keep” project fits into the “do something else” category — and I suspect it might actually be the most useful option of all.

First begun in 2010, the project asks people — all people, no matter who they are or where they're from — to send in any photographs they can no longer bear to keep. They can be physical photographs, photo albums, or photo-objects; they can also be digital images. Once the images have been received, they might find their way onto the THTK blog or as part of an actual exhibition — but whether or not the scene actually depicted in each image is shown depends on the submitter's wants and needs. If you send one in, you can grant permission for your photo to be seen in full; however, you can also request that it remain private. If you decide to keep it private, it will be displayed face down.

Some of the images come with stories; others are sent in without context. Unlike HERCLAYHEART's "Lover's Shirts" project, however, Lazarus doesn't require that submissions include the reason their owners are letting them go — as he writes on the THTK website, “The reason you can't live with the photo, photo album, or photo-object I do not need to know… the images are shown without explanation or attribution.” The project's goal, he says, is to “[create] a repository for these images so that they may exist without being destroyed.”

As Beautiful Decay points out, some of the photos don't need a story to tell you why they might be difficult to keep. Take this torn string of photo booth shots, for example:

It's likely something happened between the two people featured in the photos: A romantic relationship soured; a friendship ended; someone left or is otherwise no longer around.

Others, however, are more difficult to understand. This black-and-white photograph of a tangle of brush, for instance:

What happened here? Or what does the place represent?

Then there's this image of a graduation ceremony:

What might have turned what should have been a joyful occasion into one you'd rather not hang onto?

Or this shot, taken from the lower level of a suburban house:

I can't help but think that maybe this one has something to do with the person seen walking away here; at the same time, though, maybe it's not about the person. Maybe it's about the place.

Most mysterious of all are the things that Lazarus calls “photo-objects” — items like albums:

But regardless as to whether we think we know what might have inspired the submissions, the bottom line is this: We don't know that. We can't know it from the images alone, and what's more, it's not our place to ask. In this way, the project serves a dual purpose: It not only helps us move on from events in our past, but more over, the images we see are a reminder that we can't make assumptions about anyone or anything — and also that we don't have to in order to show someone compassion.

Although some might argue that not destroying the images doesn't accomplish a “true” letting go — after all, they're still around, and you can still go and stare at them for hours if you want to — but I disagree. There's a different kind of freedom to be had in sending your photos to THTK: It may still exist, but you've divested yourself of the responsibility of holding onto it. That, I would argue, is even more of an act of letting go than simply ripping something up or setting fire to it.

That's also why Lazarus has a stipulation for digital submissions: If you email a photo in, you must also delete all other digital copies you might have of it. Why? Because it's the only way to make the submission mean anything. “If you're going to part with it,” Lazarus told NPR back in 2010, “Then what you're seeing has this traction… it is the remnant of the decision to relinquish the image from their archive into a public archive." It makes sense when you think about it: What's the point of letting the photograph go if you're still hanging onto it?

If you've got a photo (or album, or JPG, or any other image-like thing that falls under the parameters THTK sets forth) you'd like to let go, you can mail the physical image to:

Or you can email the file to toohardtokeep AT gmail DOT com.

To see the whole project, visit Too Hard to Keep's website; you can also see more of Lazarus' work over at JasonLazarus.com.