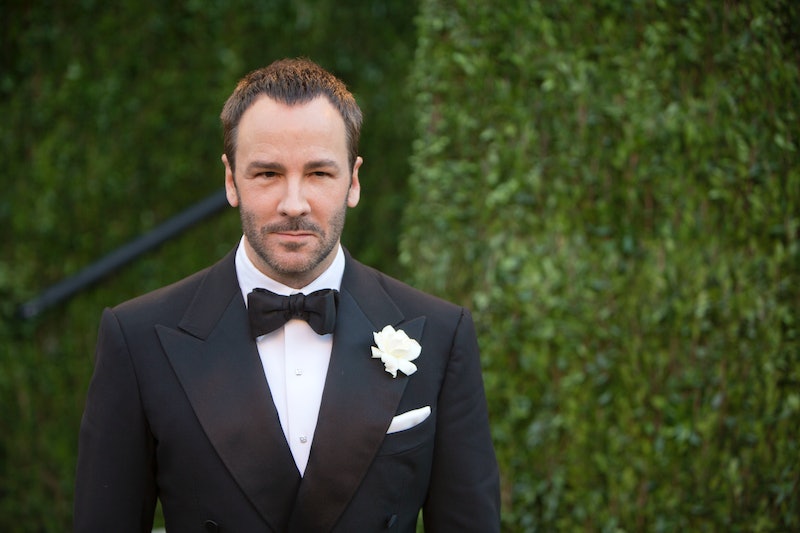 Tom Ford is a creative genius and practically the definition of a modern fashion icon (and I'm sure he's happy to live with the moniker "Fashion's King of Sex"). However, he's been criticized heavily for his objectification of women in advertisements — and probably with good reason. Despite that the blend of modern lines and feminine detailing in his gowns are a red carpet favorite, or that his empire brings in more than $1 billion a year, or even that Jay-Z wrote a song about his suits, Ford has come under fire more than once for his overt use of female sexuality.

Ford's controversial ad campaigns have been used as an example of sexism in advertising time and again and he's been targeted by the #notbuyingit campaign, too. "You know what, if you don’t like it, don’t buy it. Sensuality and sexuality is what drives so much," Ford told The Guardian. In Sunday's profile of the fashion designer, Tom Ford defends his objectification of women and his attempts to justify his commodification of the female body are, well, interesting.

"I’ve been criticized for objectifying women. But I’m an equal opportunity objectifier — I’m just as happy to objectify men. The thing is, you can’t show male nudity in our culture in the way you can show female nudity. We’re very comfortable as a culture exploiting women, but not men. But I don’t think of it as exploitation [either way][...] My women are not sitting there waiting for someone, they’re taking charge. Doesn’t matter whether they’re naked — they’re powerful, they’re smart."

The article refers to this paradigm and Ford's occasional use of the nude male body to ascribe feminist ideals to the designer. While I can definitely agree with and can get behind the sentiment of giving women freedom to choose what happens to their bodies or how they decided to use them and make money from them, I think the idea of "equal opportunity objectification" is impossible to actually achieve in the current state of the world.

Ford points out the hypocrisy of extremely controversial ads featuring full-frontal cis-male nudity while ads like the ones shown above are deemed fit to run. And I can't disagree with him on that point. The fact that society is so comfortable using women's dehumanized bodies to sell pretty much any object under the sun, but so uncomfortable using men's bodies in a similar fashion, perfectly illustrates the normalcy that this phenomenon has achieved.

Whether the cause or the symptom, the link between women's objectification and sexual and interpersonal violence has been made time and again. Simply put, when men see women as objects, it becomes easier to treat them as such. As much as Ford would like to make this solely about art and fashion, these two things have a greater impact on society and are also influenced by its current state. Basically, a bottle of perfume between two oil-slicked breasts doesn't exist in a vacuum.

Implying that equality means objectifying men's bodies feels like a straight up denial of what it's like to be a woman in the world and a woman in fashion. In contemporary culture, walking out the door still means readying ourselves to have our bodies commented on by strangers, and it means dealing with the life-long conditioning to be alert for people who may want to harm us — lest something happen that we could have "prevented."

To be a woman in our world means to understand for ourselves, our families, and our friends the implications that one in four women will be sexually assaulted in her lifetime. It means knowing that women of color and Indigenous women are even more likely to experience violence — the same women whose bodies and cultures we fetishize. Young models are often taken advantage of professionally as well as dealing with copious amounts of sexual harassment and assault while their attackers, like Terry Richardson and his laundry list of offenses, continue to work and be applauded. This doesn't seem like anything close to justice or equality to me and I don't think any number of penises in advertisements alone is going to change that.

I would truly love for equality to be achieved through the equal visibility of men's and women's bodies in the media. If it were that easy, I'd advocate for every designer to use more nude models of all genders, STAT. However, the harsh truth is that it's simply not going to happen that way. Deconstructing the social forces behind what is and isn't acceptable in fashion, media, and culture is my lifeblood — and I hope Ford continues to do that. I just hope that it's with a wider lens that takes into account the context in which he creates.

Perhaps Ford could even use his influence to create something that's actually feminist like the seven most empowering ads of 2014 or use his space to subvert the male gaze, not unlike the efforts of Asian film school Whistling Woods International. Tom Ford is creative and respected, after all, so who better to enlist in helping to create the change that high fashion advertising so desperately needs?