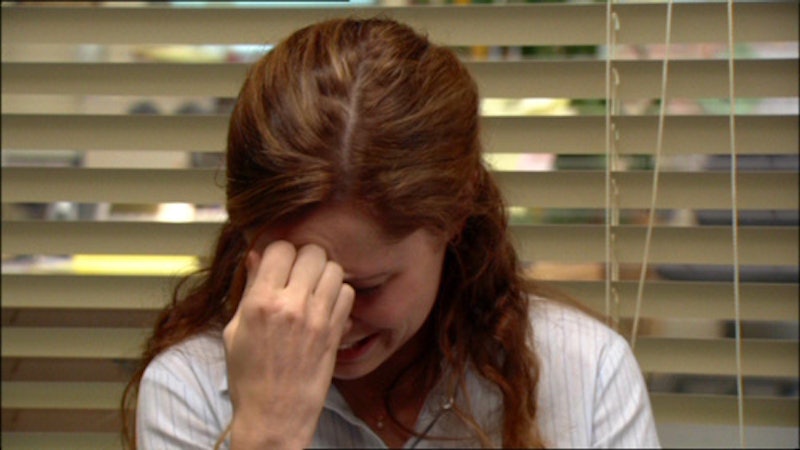 Last spring, I was heartbroken beyond belief and should have gotten stock in Ben & Jerry's (especially Chocolate Fudge Brownie). I didn't want to leave my room, let alone my house — the same place The Ex had lived with me — though getting out of it was actually the secret to getting over my breakup.

Lying on the comfy blue couch all day, the one that we’d hauled up the staircase together and collapsed on afterwards, wasn’t productive. Looking at pictures of him wasn’t, either. And whenever my eyes fell on the empty, dust-ridden bookshelf where his novels once lived, it was a constant reminder of the space he no longer occupied.

Still, I was unmotivated to leave the house. However, I was between jobs and needed to pay rent, so I agreed to take a two-month temp assignment at a law firm, which sounded more strict that my usual television production lifestyle.

You know how it is, being content with a breakup one minute, and feeling like all-is-lost-and-how-can-I-go-on the next. I imagined hiding behind legal files at the new job and silently crying to my heart’s content. Each night, I’d post a variation of this on Facebook, “This breakup's too hard. I just want to fast-forward to six or twelve months from now.” My friend Natalie kept replying, “The only way around it is through it.” Every time she said that, I wanted to throw my ice cream at the computer screen (though, at the same time, that ice cream was my safe haven, as clichéd as it was). Science says it takes 11 weeks to get over a broken heart. I hoped that was true.

My temp agency told me I’d only work 9 a.m.-6 p.m. every day, because the company didn’t allow overtime. Didn’t allow overtime?! In my previous TV production life, 8- or 9-hour days didn’t exist and I often had to work through lunch. (Here, they said I’d have to take a one-hour lunch!) The 8-hour day sounded nice, I thought, though I wished I could hide behind work day and night. Where were those 12-hour days when I needed them most? Without them, how would I avoid grieving? I couldn’t possibly go home to my empty apartment, my biggest reminder of the breakup and the person I no longer had in my life.

Though I had mixed feelings about taking the temp job, it helped me heal from my breakup in many ways.

I had to admit, the idea of short work days started to appeal to me — until I got a tour of the law firm and was given a gigantic manual of “job tasks.” Not only was my heart broken, but I felt my head exploding at the thought of actually having to concentrate and manage serious legal files. Shouldn’t they not give temps so much responsibility? I started to brainstorm 101 reasons to not return the next day. Should I fake food poisoning? (But that’s bad karma.) Flat tire? (More bad karma.) Or maybe I’d tell the agency the truth, this field wasn’t for me, not even for eight weeks.

Of course, I returned the next day, a six-pack of Kleenex in tow. I hid it under the desk at my cube. All the lawyers looked so tough and professional in their Barneys, wrinkle-free business suits. As I eyed them, I hoped I’d ironed my black dress pants and one of few button-down shirts enough. (My TV life was way more casual.) The lawyers made me uninspired to cry in front of them. I’d be mortified. Yet, that’s exactly what happened.

When I first cried at work, it was an accident. A legal file had my ex’s first name in it. Before I knew it, I blinked and a flood of teardrops emerged, dotting the file in front of me. As I dabbed the wet spots off of it (fearing I’d be fired for destroying a legal document with tears), an assistant came up to me, panicked. “Aw, don’t let this job get to you,” she said. “It’ll get easier, you’ll see.” “It’s not the job,” I said, gasping for a normal breath and letting out a quiet laugh. “It’s my boyfriend.” She hugged me and said, “I hope so.” I realized it was the first hug I’d had in a long time, born of empathy from a stranger. So, hug people around you. They probably need it.

The temp job took a lot of concentration and I only had my alone time — bathroom breaks and kitchen stops — to think about The Ex. I tried to avoid leaving my desk at all costs.

I’d wait till the last minute to use the bathroom and sprinted to the kitchen so fast, a ninja would have been impressed. I didn’t want to be alone unless I was working. I avoided people, yet I didn’t realize that’s what I needed the most.

No matter where I went in the building, someone saw me cry. As I reached for some paper towels in the kitchen (a whole roll, not just a few sheets), a janitor saw me wiping my eyes and said, “Oh, hard day at work?" "Something like that," I said.

"Allergies." "Hope it's not from the office," he said. I laughed and tried to say it was outdoor allergies, an outside pollutant, nothing inside the building. “Do you need more paper towels?” I looked at the roll in my hands. “Hope not,” I said as I left.

During lunch, I'd either stay in or take a walk, the latter of which was too painful (the being-all-alone thing again) and would result in my scrambling to find yet more Kleenex in my car. My cubemate ended up being the nicest cubemate ever and we soon became lunch buddies and confidants, talking about anything and everything and buying each other our favorite cookies if we were having an off day. (I know... I needed to start laying off all the ice cream and cookies!) I also started befriending other co-workers instead of hiding out alone.

And then, another day, the worst happened. An email appeared in my inbox from The Ex (after I’d said we shouldn’t speak for several months). My eyes became misty. I told myself not to click on it while at work. But what’s a little peek going to do? Cause hysterical tears, that’s what. I couldn’t stop crying. I had to get away from my desk. I hid in the bathroom and thought I was alone when suddenly one of the most intimidating lawyers emerged from a stall and appeared next to me at the sink.

“Please tell me it’s not the job,” she said as she scrubbed her hands. “No,” I said, splashing my face with cold water. “Men,” I said, my script getting more brief. “This is so embarrassing,” I added. “I haven’t cried in 24 hours.” “You know,” she said, “my ex-fiancé and I broke up when I started at a new firm once. I had to take sick days my first week. Can you imagine? You’re braver than I am, even showing up.” After she dried her hands, she hugged me. I got tears in my eyes again, this time from having landed in the nicest law firm in the city. “Stop by my office anytime,” she said.

At my desk, I found more and more work to immerse myself in and my bosses even suggested I pursue law. Around every corner, I found more and more empathy. Everyone had a hug or a breakup story to share, or both. I found an unofficial support group among the most serious work environment I’d ever been in. (On top of which, I actually liked the work and contemplated becoming a paralegal.)

My eight-week temp job saved my life and helped alleviate my heartache. By being distracted and surrounded by supportive people, I learned to cope and get through the breakup versus skipping right over it. I guess my friend Natalie had been right, after all.

About six months later, I ran into one of those ex-co-workers. “Natalia, you look so much better,” she said. “You’re smiling."

More like this
The 19 Best Tweets & Memes About Bisexual Awareness Week
By Lexi Inks
10 Ways To Be More Empathetic To Your Partner
By Raven Ishak and Lexi Inks
Why Harry Styles & Olivia Wilde Make A Great Couple, According To Astrology
By Nina Kahn
Black Women's Equal Pay Day Highlights An Upsetting Problem
By Brandi Neal
Get Even More From Bustle — Sign Up For The Newsletter