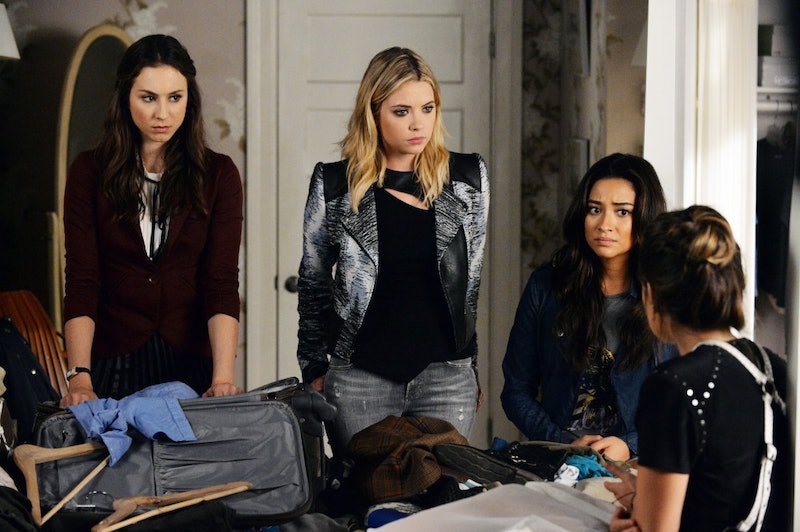 Can you believe that the #BigAReveal is just a little over 24 hours away? It's seriously going to be hard to keep it together until then — even if we do have the show's costume designer Mandi Line bombarding our Instagram feeds with Pretty Little Liars style dupes as of late. I mean, this is something we've been waiting for since the pilot first aired on June 7, 2010. We've been waiting almost five years. Five years, and now the hour is nearly nigh: Will it turn out to be the ever-shifty Wren? Fan-favorite Aria? Even fan-favorite-ier Hanna? Lurky Andrew? An A-two-times-over Mona? Heck, it could even be the long-presumed dead Maya... at any rate, it's seriously enough to make you crazy. So let's take your mind off all of it by looking at some pretty clothes!

After all, the outfits are the show's second biggest selling point (after intrigue, of course), and it's always fun to take style inspiration from Aria, Spencer, Hanna and Emily (and sometimes Ali and Mona, too) — and Mandi has just made it easier for you in a major way. She's taken some of the ladies' best outfits from throughout the series, and posted just where to buy the real thing and some pretty darn good cheaper dupes! How's that for an awesome costume designer? Let's take a look:

... But her date night look is even more chic (even if her Hamlet date Colin's more than a little bit shady).

Tuxedo pants from Forever 21? What a nice, cost-effective way to try out one of this season's hottest trends.

No one does simple clean lines and the whole menswear-inspired look better than Emily.

Why not try mixing statement pieces like Aria here?

And of course she's giving tricky new trends like the harness-belt a try.

A hot pink chiffon maxi dress and a mod black and white jacket? Why, I think I will.

Who better to advise us on PLL style than the show's own costume designer, right? Check out these looks (plus a lot more) over at Mandi's Instagram account!