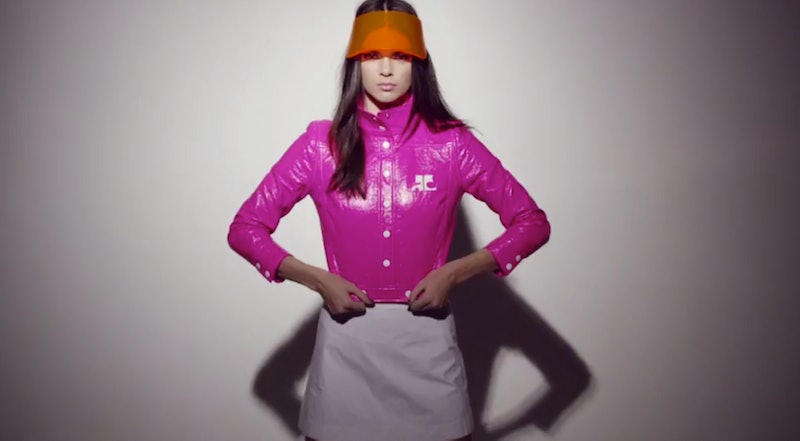 Just when you thought Kendall Jenner was the busiest model in the industry, she surprises us with yet another gig: Kendall Jenner's new Estee Lauder video campaign was released today and it's '60s Space Age perfection. The video announces the beauty brand's new collaboration with fashion house, Correreges.

The nineteen-year-old model and reality TV star was named the face of Estee Lauder last November. Her first ad with the iconic beauty brand debuted this January. While that video had more of a psychological thriller vibe to it, Estee Lauder's latest video campaign is much brighter and more vibrant. Jenner can be seen modeling bright pink lip gloss and silver eyeliner from their 12-piece limited edition collection.

The color scheme from both the makeup palette and the costumes looked just as fresh on Jenner as they did on models of the 60s' when the French House, Correreges, rose to prominence. The designer, Andre Correreges, worked as an engineer before pursuing a career in fashion. His background in engineering continued to influence him while he apprenticed for Cristobal Balenciaga, during which he mastered bold, gravity-defying shapes. Correreges signature is reflected in the packaging for the collaboration. The futuristic, intergalactic atmosphere and packing for the collaboration is inspired by Andre Correreges 1964 collection.

In addition to a pink patent leather jacket, Kendall Jenner also sports a translucent orange visor. Another look in the video shows Jenner in a hooded sweatshirt made out of white netting with a pair of over-sized sunnies.

The brunette beauty's career has been non-stop lately. Yesterday, Jenner announced that she would be in Vogue's April issue with model BFF Gigi Hadid. The incredible spread was shot by Mario Testino and features other young celebs including Justin Bieber and Ansel Elgort.

Watch Jenner in her video campaign for the Estee Lauder and Correreges collection below.