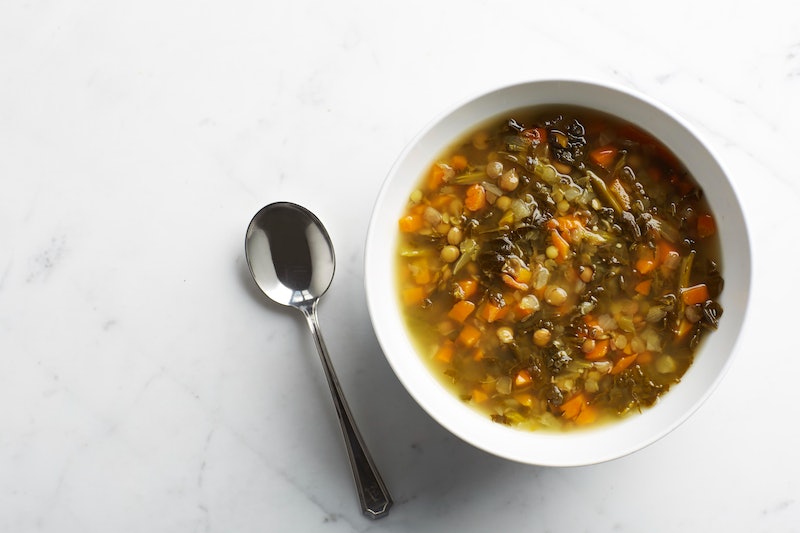 When an acquaintance from college left publishing to attend culinary school and start a soup company, I was a little jealous. When her ultra-pretty Instagram account started advertising Splendid Spoon soup cleanses, I wanted in. I'd tried a three-day juice cleanse years ago and didn't particularly like it — I spend so much of my mental energy and get so much joy from thinking about what I'm going to eat next that taking that (and chewing, never underestimate the importance of chewing) away from me made my days feel empty and boring — even if BluePrint's cashew cinnamon milk is the stuff dreams are made of. Maybe a soup cleanse was a way to reset eating habits without it feeling so punitive?

There's been a lot of competing conversation about whether or not juice cleanses truly have all the positive health benefits with which they are credited. People talk about losing weight and feeling energized (neither of which I experienced during my juice cleanse. Food is what energizes me. FOOD.), and extol the toxin-elimination properties of juice cleanses — allegedly since your body is spending less energy on digestion, it is free to direct its energies towards detoxing. In truth, it seems like you're likely losing water weight, they'll more likely make you feel faint than energetic, and our bodies do a perfectly fine job of toxin-cleansing on their own. It can have some negative health effects too. I do remember that participating in the juice cleanse inspired me to reform my eating habits in the few days following the actual cleanse — but that's a purely mental result rather than a physical one, and could likely also be achieved by eating super clean or raw or vegan for a few days.

Splendid Spoon bills its cleanses as "a fantastic way to reboot your diet, ease in or out of a juice cleanse, or simply give your diet a plant-based boost." As someone who considers burritos a food group, I could certainly use a little rebooting, and I've been curious about the health benefits of a plant-based diet since Mark Bittman's book about eating vegan before 6:00 p.m. I decided to do a one-day cleanse (I'm not a masochist), which included five soups totaling 715 calories. If I struggled with a typical juice cleanse's 1,000 calories, surely I would find such calorie restriction to be impossible (or at least highly uncomfortable, and I like to be comfortable at all times). Though it doesn't say so on the website, founder Nicole Chaszar recommends cleansing in whatever way one feels comfortable, and gave me the go ahead to add vegetables and whole grains to get my calorie intake closer to my required-or-else-I'll-faint 1,500 per day which, let's be honest, I often double.

The one-day cleanse involved five soups — lentil and kale, mushroom with steel cut oats, butternut squash with turmeric, spicy beet, and kale ginger — which were delivered directly to my office. Not wanting to start the day with something savory (and not wanting to subsist on only 700 calories), I had oatmeal with vanilla soy milk for breakfast (and walnuts and brown sugar and a bite of a pastry). Oops!

Around 11:00 a.m. it was time for my first soup. I opted for the lentil and kale — it was tasty and well seasoned, and I appreciated that it had a chunky texture so that I had to chew (I'm telling you! Chewing!). I'm convinced my body burns through food at a superhuman rate, so it only filled me up for 90 minutes or so, a time frame that would probably have been shorter were it not for the protein and fiber from the lentils.

At a normal human lunch time, I went for the mushroom with oats, which sounds super weird but I'm telling you, oats are way underrated as a potential addition to savory foods — in fact someone recently told me I should try grating Parmesan on them and eating them like grits for breakfast, which I support. The soup was hearty and buttery, with the oats adding body to it in a way that couscous or rice might. I want to keep quarts of this stuff in my freezer it was so good, and it kept me full for hours — Hours! — which is no small feat. Ask my coworkers. They think I have a tape worm.

At 4:00 p.m. I ate an entire avocado, mashed up on two pieces of multi-grain toast, with a crazy amount of salt, likely negating any anti-bloating properties of the cleanse, because I have low blood pressure and my doctor told me like seven years ago to eat more salt and I will never ever stop using that as an excuse for my sodium intake ever. At 7:00 p.m. it was soup time again and I opted for the spicy beet, which reminded me of all the borscht I ate on a recent trip to Russia...minus all the delicious beef. I missed the beef.

And I regretted having plowed through the two chunky soups earlier on, leaving myself with only purees to go. I ate the small portion of silky butternut turmeric next, then sniffed at the kale ginger and decided to forgo it — it reminded me too much of the green juices I drink to punish myself after eating too much pasta. I went to bed several hours later without feeling the need to eat again beforehand. Seriously, no small feat.

I woke up the next morning starving, which is actually pretty typical, and forgot to step on the scale so I can't tell you if I dropped any pounds. What I do know is that I felt good — energetic, light, and pretty pleased with myself for exercising a small amount of willpower the day before. Again, these effects may have been more mental than physical, but if I can come by them by eating hearty soups rather than drinking murky juices, count me in.

The verdict? While the health benefits are TBD, I do think that a soup cleanse can help you reset your eating habits in a way that feels far less strenuous than drinking juice all day. I ate mostly fish, veggies, and whole grains for the next few days, and didn't even visit Chipotle until the weekend. Success!

More like this
10 Pumpkin Recipes That Are Way More Creative Than Pie & Lattes
By Rebecca Deczynski and Alexis Morillo
On TikTok, Tinned Fish Date Night Is The Latest Viral Food Obsession
By Emma Carey
This Psychological Effect Might Be Keeping You From Hitting Your Goals
By Lexi Inks
The 8 Best Fridge Organizer Bins To Tidy Everything From Produce To Drinks
By Rachel Dunkel
Get Even More From Bustle — Sign Up For The Newsletter