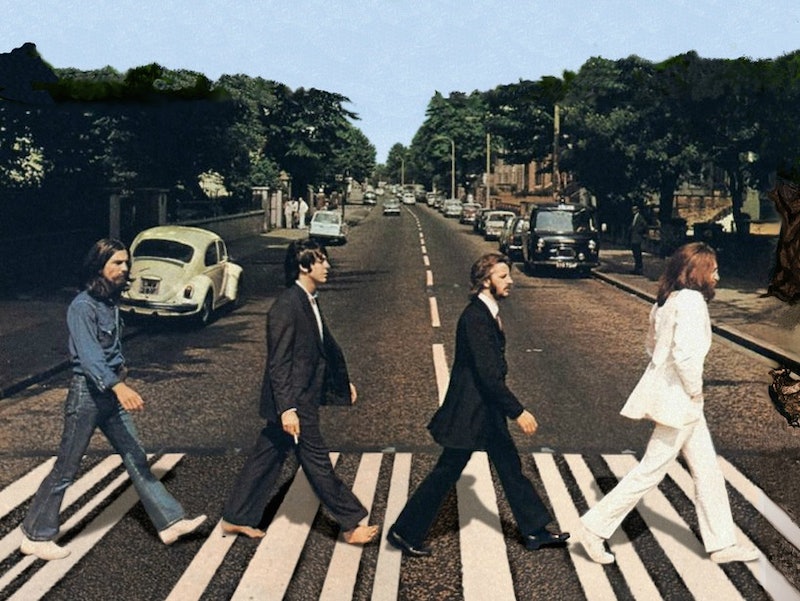 We're often told that the camera doesn't lie — but we'd do well to remember that it doesn't always tell us the whole story, either. That's what San Francisco-based artist Hannah Rothstein's series “Context Is Key: Beyond the Frames of Famous Photos” gets at as it reveals to us some possible explanations for why five famous photos looks the way they do. Created in partnership with Udemy in order to both share Rothstein's creativity and, in grand Udemy fashion, teach others to think outside the box as well, the series looks beyond the obvious — oh, and also? It's funny. Really, really funny. So funny, in fact, that I'm considering blowing all of them up, printing them out, framing them, and hanging them on my wall, just so I can make myself laugh every time I look up at them.

As you might recall from her "Thanksgiving Special" series — photographs which depicted Thanksgiving dinners as if they had been plated by famous artists — Rothstein's work often takes ordinary, everyday objects and ideas and turns them on their head; the resulting changes in perspective, both literal and figurative, encourage us to keep rethinking how we see and deal with the world, often through humor. Such is the case with “Context Is Key,” which re-imagines what might be going on outside the frames of photographs we all know and love.

For example, what might have caused the pine shot by Ansel Adams in Yosemite to grow the way it did?

The constant gale force winds brought on by the desk fan to end all desk fans, of course.

Or, to put a spin on an age-old question, why did the Beatles cross the road?

To get to the hot dog stand. Duh.

And while we're on the subject, why the heck does Salvador Dali look so mischievous here?

Ah. Right. He's about to place a whoopie cushion right where it counts. He would do something like that, wouldn't he?

“We see photographs as truth, proof of reality. I wanted to devil's advocate the hell out of this notion,” Rothstein told Bustle via email. She elaborated, “Yes, photographs are reality, but only one person's version of it. In our increasingly visual culture, where images carry more power than ever, we need to remember that seeing can no longer be believing.”

Something about that statement really resonates with me. Maybe it's just through the coincidence of discovering both this series and Jason Lazarus' “Too Hard to Keep” at roughly the same time — but I can't help but see similarities in the takeaways from them both. Although Rothstein used playfulness and humor make her point with “Context Is Key,” while “Too Hard to Keep” bears the weight of memories too painful to hold onto, both of them remind us that we're very rarely — if ever — seeing the whole picture. This is true in art and media, as well as in real life; and so for a second time today, I find myself reminded of the importance of knowing exactly how much we don't know: Which is to say, almost everything. And what's more, it's OK that we don't know everything. It means there's still plenty left out there for us to discover — which is ultimately what makes our time on this big, crazy planet worth it, right?

Check out the full "Context Is Key" series over at Udemy, and see more of Rothstein's work at HRothstein.com.