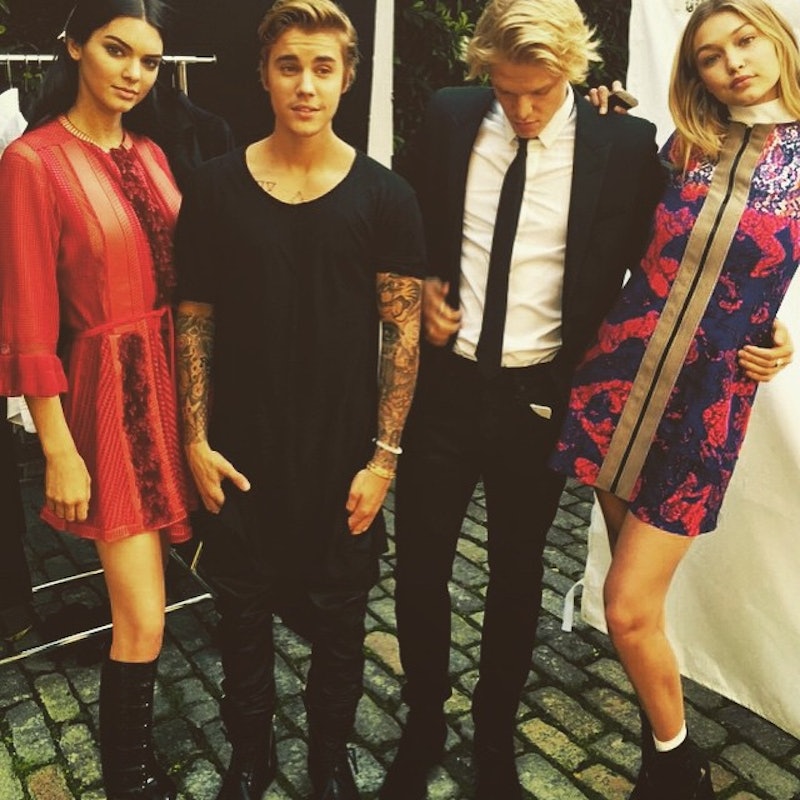 Hollywood's obsession with youth culture gave birth to one of the most famous cliques in entertainment history: the Brat Pack. But since the good old days when Molly Ringwald, Rob Lowe, and practically every teen actor who starred in a John Hughes film ruled the social scene, there hasn't been a group of young celebrities that could be named as their rightful heirs. Well, it looks like the next generation of cool kids has been crowned, at least that's what one fashion publication believes. In their latest issue, Vogue dubbed Justin Bieber and Kendall Jenner as part of Hollywood's new Brat Pack. The two star in a pictorial that appears in the April issue of the magazine with Serena Williams on the cover.

Renowned photographer Mario Testino shot Bieber, Jenner, and a handful of other celebs that are taking the acting, modeling, and music world by storm. Joining the A-list duo in the shoot are Jenner's BFF Gigi Hadid, Insurgent actor Ansel Elgort, and celeb siblings Dylan and Hopper Penn (the offspring of former Brat Packer Sean Penn and House of Cards HBIC Robin Wright). The stars were photographed by Testino in Los Angeles and styled by Vogue Fashion Editor Camilla Nickerson.

"I'm actually an introvert," Bieber says. "But as far as shooting fashion goes, or being onstage — me having to be on — I don't get nervous." For his poolside shot with Jenner, the singer and recent Comedy Central roastee, wore a Dior shirt and Saint Laurent by Hedi Slimane jeans. Meanwhile, Jenner is photographed in a white ruffled bikini by Michael Kors. For more photos from the new Brat Pack spread, visit Vogue.com.