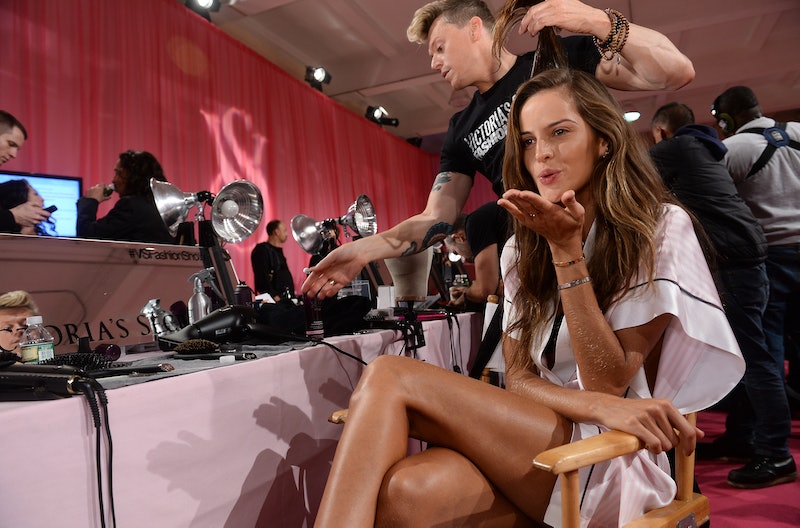 In the past 12 months, several nations have been striving to combat the high rates of eating disorders within the fashion industry, with a focus on the models themselves. Israel banned underweight models in January, and just last week, France considered banning underweight models as well (ultimately deciding against it, but opening up an important conversation nonetheless). On paper, this sounds like a progressive idea. When you consider how many fashion models have died from complications caused by anorexia nervosa and bulimia — and when you consider the impact that seeing only images of extremely slender women in the media can have on developing girls — ensuring that models don't constantly hint at an advertisement for ED seems like the smart, body-positive move.

Discussions of weight in correlation to health are almost impossible to avoid if you're a member of the contemporary human race. On one end of the spectrum, you get people assuming that all fat men and women are riddled with illnesses (heck, you get people defining "fat" as an illness in and of itself). And on the other end of the spectrum, you get all thin models being presumed to be victims of eating disorders. It's very rare that a human body is allowed to exist without some kind of weight/health critique being thrown its way. And for the most part, this is irrevocably wrong. A person's weight, much like a person's health, much like a person's sense of dress or preference in late-night television, is, logically, that person's business. But when it comes to actual eating disorders in the modeling industry, an exception should probably be made.

When France was considering the ban, they proposed enforcing the rule that in order to qualify to be a model, one must have a Body Mass Index (BMI) of 18 or higher (anything below 18 is considered "underweight," and anything below 16 "severely underweight"). The trouble with BMI, of course, is that it's subjective. It doesn't determine "health" so much as relative size and mass. On its own, BMI cannot tell you whether a person has anorexia or whether a person is simply naturally slender. And this is where things begin to get murky.

In an effort to see how actual models felt about France's idea, Cosmopolitan interviewed five women in the industry. NYC-based model Lyndsey Scott pointed out the following: "Even people with eating disorders can have a so-called healthy BMI. Perhaps they should have doctors check for signs of anorexia and bulimia instead of making assumptions based on weight." And she's spot on. Because as I mentioned, BMI alone cannot prove an eating disorder or any kind of actual determinant of health, and maintaining the mentality that it can means that we're ignoring the people who might actually need help. As Scott suggests, it's perfectly possible for a technically "overweight" woman to have an eating disorder, just as it's equally possible for a 5'8", 108 lb. woman to be naturally slender or athletic in build.

Scott poses the question: "Is forcing some models into a thicker body type that may not be natural for them the best way to solve a health problem?" Realistically, it's probably not. All bodies carry weight differently. All bodies gain and lose weight differently. All bodies have their own rhythm and flow. Forcing models into weight gain without evidence that there's actually an eating disorder would undoubtedly be unhealthy — physically and psychologically — for a woman who is happy and comfortable at her natural weight. But that being said, it cannot be ignored that the modeling industry has been intertwined with eating disorders for decades.

According to a survey conducted by the Model Alliance featuring 85 participants (all working fashion models in New York and Los Angeles), over 30 percent had had eating disorders; over 60 percent had been asked to lose weight by an agent; and almost 70 percent suffered with anxiety and depression. Any sentient and decently empathetic human can probably agree that these are troubling stats — that the backwardness and body shaming so prevalent in an industry that touches millions needs to go.

Let's think back to 2006, when 22-year-old Uruguayan model Luisel Ramos died of heart failure caused by anorexia nervosa. She'd just walked a runway show, and on the day of her death, she weighed in at approximately 96 lbs. at 5'9". Fast forward to 2007, when Luisel's 17-year-old sister, Eliana Ramos, died of a heart attack due to malnutrition whilst visiting her grandparents. The Ramos sisters are remembered predominantly for their tragedy — tragedy that could have been avoided. And if such tragedy can be avoided, shouldn't we be doing everything in our power to do so? To teach young women (and men) that living up to such a harsh standard of beauty is quite literally self-destructive?

In the same Cosmopolitan feature, model Sierra Anderson says, "I feel like it's good to let people know that [extreme thinness] is not healthy and it's not a look people want to see. People want to see natural women who work out and eat healthy and are not frail." But for a long time, this extreme thinness has been the predominant depiction of beauty that we've been presented with. Perhaps much of the public has wanted a variety of aesthetic imagery, but that hasn't stopped beauty and fashion industries from focusing on the extremely thin prototype — for crafting a vision of aspirational beauty that can, and very often does, lead to eating disorders.

Model Amanda (whose name was changed for the Cosmo piece) recalls a particularly troubling experience: "One time, during Fashion Week in New York, I went to a casting. They were like, 'Oh, great, you're a size 4, can you come in? We're looking on the larger end of things.'" This is equally problematic. When an industry makes it so that those within it begin to believe that a size 4 is exceptionally large, they're crafting a beauty ideal dependent on weight loss — a beauty ideal that says that a size 4 is somehow unnatural. And that subsequently suggests that anything larger than a size 4 is horrifically unnatural.

The problem with banning all "underweight" models, however, reverts to the basic principle that being naturally slender is not uncommon. For many women — models and otherwise — gaining weight is nearly impossible. This could be down to a fast metabolism, genetics or athletics, but it happens. To excommunicate a woman from an industry because she is naturally slim enough to have a BMI under 18 is ultimately not much different than excommunicating a woman from an industry because her BMI is 25 or over, classing her as "overweight." Doing so also suggests that thin bodies themselves are the problem, when in reality, the bigger problem lies in only seeing thin bodies represented in the mainstream.

That the modeling industry has been tainted by an extreme and often life-threatening vision of beauty is indisputable. But perhaps the solution is not to make the industry any more oppressive or discriminatory. Perhaps it's not to make assumptions of weight and health. Rather, perhaps it's to create a space where all bodies can shine, whilst simultaneously offering more help and care to the women who are suffering from an ED. Perhaps those involved in the industry need to take responsibility for the body shaming they themselves have perpetuated, but to do everything in their power to make sure that our future generations of young women will never have to look upon homogenized and exclusionary media — but media and imagery that prove that all forms and figures are stunning.