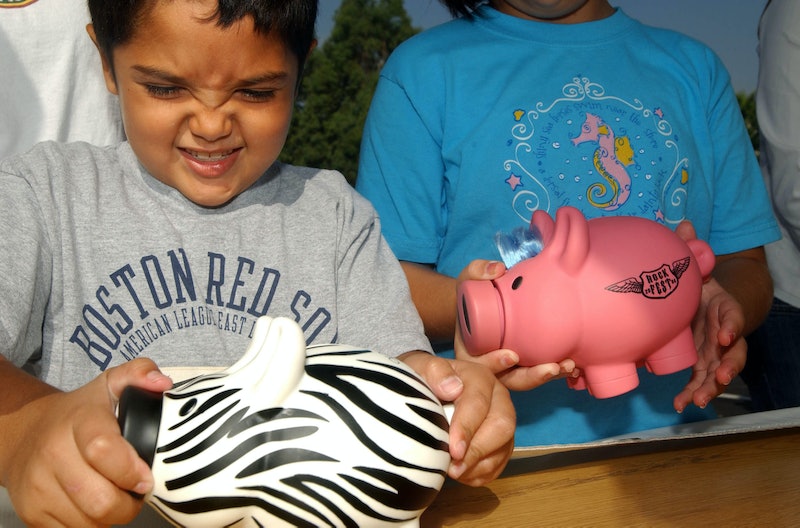 Jason and Aaron Clark are both 11 years old. They're twins, and they live in Barnsley, South Yorkshire in the UK. Like many pairs of twins, they're extremely close; the fact that Aaron has Down syndrome has never prevented them from being as thick as proverbial thieves. In fact, they're so close that Jason has recently launched a campaign to help not only his brother, but all of the students at the school Aaron has attended for the past five years: Jason Clark started a charity to benefit the Greenacre School. So far, he's raised more than £400 for the school, which specializes in helping students with complex needs. These two kids? I want to give them the biggest hugs in the world. Because that is amazing.

Aaron and Jason first came to the world's attention via last Friday's edition of the Barnsley Chronicle. In a short brief published online (the full story was apparently limited to the print edition), we learned that Jason wanted to help both his twin and all the other students at Greenacre — so he actually went and sold all his old books and toys to raise money for the school. And that's not all; the move was part of a larger plan he's set in action. Jason also started the charity SuporttheNoun (yes, “suport” with one p) geared towards raising money for disabled children. That's right: An 11-year-old has done more in his brief time on Earth to help those in need than most of us do in our entire lives. If that's not a call for the rest of us to step up our game, I don't know what is.

The Daily Mail subsequently picked up the story, which has since spread far and wide. According to the boys' mother, Lynn, “[Jason has] had table top sales, a party, and placed collection boxes in shops to raise money.” He's registering SuporttheNoun as we speak. Jason's headteacher, Susan Hayter (whom Jason enlisted to help him set up the whole thing), said that the funds raised by SuporttheNoun will go towards gardening tools and a lawnmower for Greenacre; the plan, said Hayter, is to allow for the older students to start and run a gardening service, broadening their schooling beyond the purely academic. Life skills? Check plus. I don't know about you guys, but I definitely wished I'd had Business 101 and Personal Finance as a requirement at some point in my schooling. The gardening venture sounds like an excellent way to teach them.

Lynn also elaborated on the brothers' relationship, which has been tightly knit since the very beginning: When Aaron had difficulty communicating early on, Jason and the family learned sign language so they could speak together; Jason has stood up to bullies on Aaron's behalf; and, budding entrepreneur that he is, he has even told Lynn that he wants to run a business when he grows up so he can always make sure Aaron has the care he needs. Said Lynn, “They have always been extremely close. They have a very unique and special bond. They aren't just twin brothers, they are best of mates, too.”

As for Jason himself? “I decided it was a good idea because it quite a lot for people born with disabilities and I wanted to do something for them,” he said to the Mail. “It feels really good to help and make a difference. I hope Aaron will be very proud of me.”

You guys. I can't. I just can't. How many kids do you know who a) do something this amazing, and b) do it because they hope the person or people they're helping will be proud of them? For me, that number is zero.

I'm so glad that both these boys seem to have the support they need to thrive. And guys? I wasn't kidding when I said we need to step up our game. No matter how many excuses we can make for not helping someone out, they're all bullshit. This story proves it. If you want to kick in a few bucks for SuporttheNoun, you can do so here; or, alternatively, you can do something else. You can donate to another cause you believe in. You can volunteer for a day. You can promise to be the best person you can be, today and every day (and actually follow through on that promise). We all owe it to both ourselves and to each other to keep improving — to keep being better than we are. So let's work on that, shall we?

More like this
Chris Kaba's Family Continue Fight For Justice After Viewing Police Bodycam Footage
By Sophie McEvoy
Here’s Your Daily Horoscope For October 3, 2022
By Mecca Woods
The Spiritual Meaning Of Angel Number 666, Explained
By Brittany Beringer
Angel Number 333 Is All About Self-Love & Alignment
By Brittany Beringer and Kristine Fellizar
Get Even More From Bustle — Sign Up For The Newsletter