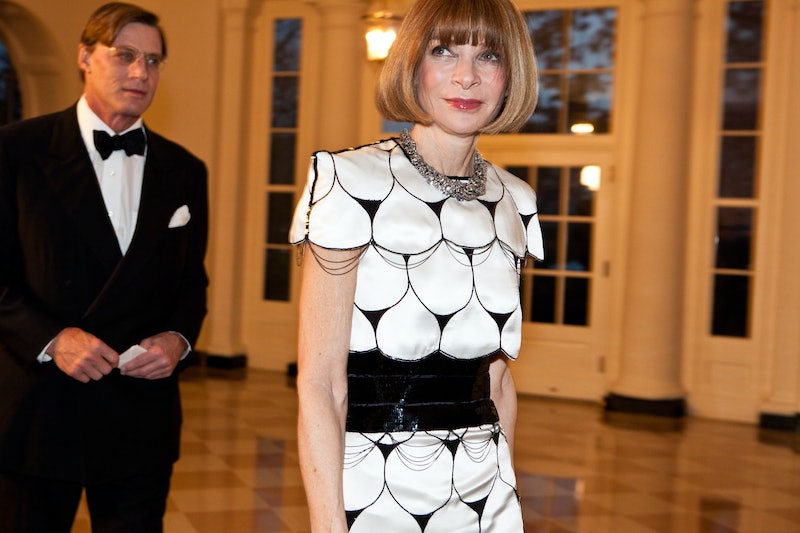 Take out the Oscars, the MET Ball, the Globes, and the Grammys, and you are left with only a handful of red carpet events that deliver headline-grabbing fashions that were plucked straight from the runways or magazine editorials. If you add the Primetime Emmys, the VMAs, and movie premieres to that list, then the struggle to find a dress that hasn't already been photographed on an A-list actress or pop star becomes an even bigger problem for the talented folks of the theater world. Well, that could change soon because Page Six reports that Anna Wintour is in talks to revamp the Tonys red carpet. The Vogue editor-in-chief will act as an "unpaid, uncredited, top-secret consultant" according to the article's source.

In an interview with Suzy Menkes published last year, Wintour spoke out about the disastrous Tony Awards fashions that she witnessed on the red carpet for Broadway's biggest night. "I was just recently at the Tony Awards in New York, and, God, they need your help," Wintour said. "Let me tell you, it was a disaster... [Celebrities] have all these teams of people telling them what to do, what to wear, how to do their hair, makeup. And they're so scared of being criticized, whereas, you know, what's wrong with looking different? How many mermaid fishtail strapless sequin [gowns] can we see?"

There's still months to go before the world sees a Tony red carpet makeover, but with Wintour's rumored involvement, there's a good chance that couture will replace those pesky fishtail sequined dresses once and for all. The American Theatre Wing's Tony Awards will be broadcast live on June 7.